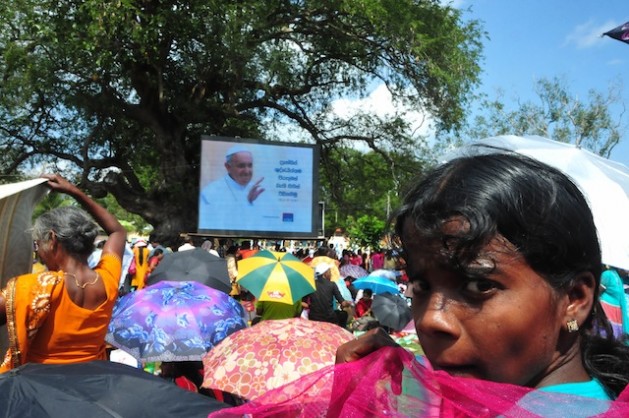 MADHU, Sri Lanka, Jan 15 2015 (IPS) - Jessi Jogeswaran, a 20-year-old woman from Sri Lanka’s northern Jaffna district, waited over six hours with 18 friends in the sweltering heat just to get a glimpse of Pope Francis on Jan. 14.

The much-anticipated Papal visit brought well over a million people out into the streets to hear the pontiff’s sermons, first in the capital Colombo and later on in Madhu, a village in Sri Lanka’s northwestern Mannar District.

“If we know what happened to all those who went missing, or what will happen to all those still in prison after the war, we will know that things have changed." -- Ramsiyah Pachchanlam, community empowerment officer with the Vanni Rehabilitation Organisation for the Differently Abled (VAROD)
Young and old alike congregated at designated sites, including those like Jogeswaran who traveled miles to be present for the historic occasion.

The young woman with a disarming smile hides a terrible tale: as an 11-year-old, she endured three years of death and mayhem in her native village of Addankulam in Mannar, caught between advancing government forces and military units of the separatist Liberation Tigers of Tamil Eelam (LTTE) who at the time controlled a vast swath of land in the north of Sri Lanka.

The six-member family’s flight began in 2007, at the tail-end of the country’s civil conflict, and would last almost two years before, in tattered clothes, they escaped the final bouts of fighting in April 2009.

“The nightmare has not ended, it has become less intense,” Jogeswaran told IPS, sitting in the compound of the Madhu Shrine, a church nestled in the jungle that is home to a statue of the Virgin Mary, which millions around the country believe to be miraculous.

Jogeswaran said that despite the war’s end, thousands of people in the north were still fighting to escape the crutches of abject poverty, recover from the traumatic events of the last days of the war and reunite with relatives lost in the chaos of prolonged battles over a period of 26 years.

“We need peace, both within and without,” she added.

Delivering a short sermon at the shrine, Pope Francis echoed her sentiments.

“No Sri Lankan can forget the tragic events associated with this very place,” he said, referring to the attacks on the church and its use by local residents as a place of refuge during extreme bouts of fighting.

He also acknowledged that the healing process would be hard, and that sustained effort would be required “to forgive, and find peace.”

For scores of people here, however, the wounds are too many to forget. The over 225,000 who were displaced during the war have now returned to a region where some parts boast poverty rates over four times the national average of six percent.

There is an urgent need for some 138,000 houses, amidst a funding shortfall of 300 million dollars. Nearly six years after the war’s end there could be as many as 40,000 missing people, although the International Committee of the Red Cross (ICRC) has records of little above 16,000 dating back over two decades.

While the completion of several large infrastructure projects suggested rapid development of the former war zone – including reconstruction of the 252-km-long rail-line connecting the north and south at a cost of 800 million dollars – few can enjoy the perks, with 5.2 percent unemployment in the Northern Province.

A lack of job opportunities is particularly hard on war widows and female-headed households – estimated at between 40,000 and 55,000 – and the nearly 12,000 rehabilitated LTTE combatants, among whom unemployment is a soaring 11 percent.

Untreated trauma, coupled with a lifting of the LTTE’s long-standing ban on the sale and production of liquor, has pushed alcohol dependency to new heights.

With scores of people seeking solace in the bottle, the northern Mullaitivu District recently recorded the second-highest rate of alcohol consumption in the island: some 34.4 percent of the population identify as ‘habitual users of alcohol’.

Finally, despite the war’s end, there has been no progress on power devolution to the Tamil-majority Northern Province, a root cause of the war.

A new political era: A bright future for the North?

The week before the Papal visit, Sri Lanka underwent a seismic change in its political landscape, when long-time President Mahinda Rajapaksa was defeated by Maithripala Sirisena, who campaigned with the support of a wide array of political parties including those representing Sinhala extremists and others representing the minority Tamil and Muslim populations.

Jogeswaran, who voted to elect a national leader for the first time at the Jan. 8 poll, told IPS that she felt nervously optimistic that things would change.

“We have a new president, who has promised change, now it is up to him to not deceive the voters,” she said.

Ramsiyah Pachchanlam, community empowerment officer with the Vanni Rehabilitation Organisation for the Differently Abled (VAROD), told IPS the northern population was desperate for things to improve.

“There are new roads, new electricity stations and a new train line, but no new jobs,” Pachchanlam said, commenting on the over three billion dollars worth of infrastructure investments made under the former Rajapaksa administration that has not trickled down to the people.

The Sirisena government has shown some signs that it was much more amenable to the needs of minority Tamils than its predecessor.

In his first week in office, Sirisena replaced the long-standing governor of the Northern Province, G. A. Chandrasiri – a former military officer – with G. S. Pallihakara, a career diplomat.

The appointment of a civilian officer to the post was a key demand of the Northern Provincial Council controlled by the Tamil National Alliance (TNA), which had previously accused the former governor of stifling the council’s independence by carrying out instructions received directly from Colombo.

Many hope that greater political autonomy will pave the way to resolution of the most burning issues plaguing the people.

“If we know what happened to all those who went missing, or what will happen to all those still in prison after the war, we will know that things have changed,” social worker Pachchanlam said.

It remains to be seen if change will happen on the ground, but for a brief moment, in that jungle shrine, thousands came together in hope and expectation of a brighter future.