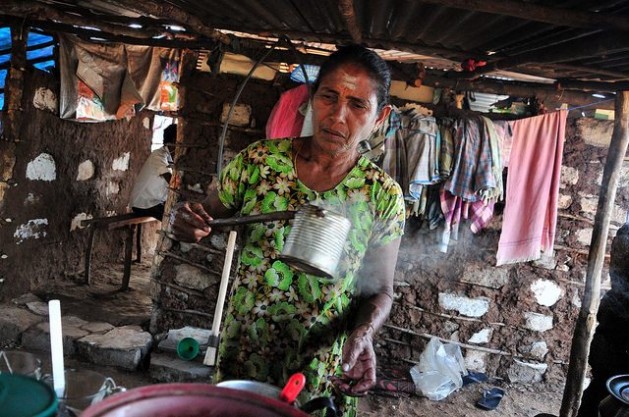 Women and children are badly affected by the rise in alcohol consumption in Sri Lanka's Northern Province. Credit: Amantha Perera/IPS

DHARMAPURAM, Aug 3 2014 (IPS) - Back in the day when the separatist Liberation Tigers of Tamil Eelam (LTTE) ran a de-facto state in Sri Lanka’s Northern Province, alcohol consumption was closely monitored, and sternly frowned upon.

But after government forces destroyed the militant group in 2009, ushering a new era into a region that had lived through three decades of civil conflict, strict rules governing the brewing and sale of spirits have lost their muscle.

Plagued by poverty, trauma and a lack of employment opportunities, civilians in the former war zone are increasingly turning to the bottle to drink their troubles away.

“There is worryingly high casual and habitual use of alcohol in the region. Drinking hard liquor by the end of the day is becoming a [norm],” Vedanayagam Thabendran, district officer for social services for the Kilinochchi district in the Northern Province, about 240 km from the capital Colombo, told IPS.

Available data on alcohol consumption trends back his assessment.

“There is a visible shift in consumption patterns in the war-affected areas from the days of the LTTE. They did not allow the northern citizens to drink moonshine [freely]." -- G D Dayaratna, manger of the health and economic policy unit at the Institute of Policy Studies (IPS)
According to a December 2013 survey by the Alcohol and Drug Information Centre (ADIC), a national non-governmental organisation, the northern district of Mullaitivu had the second highest alcohol consumption rate in the island, with 34.4 percent of the population identifying as ‘habitual users of alcohol’.

The survey covered 10 of the 25 districts in the country, including two in the Northern Province.

The researcher told IPS that “anecdotal evidence and alcohol sales figures” indicate a link between the end of the civil war and the rise in alcohol consumption.

District official Thabendran said that alcohol abuse was more pronounced in interior villages that had once fallen under the purview of the LTTE. He identified one such village as Dharmapuram, located about 17 km northeast of Kilinochchi Town.

“We keep getting regular reports of domestic disputes because of alcohol consumption and we know that there are a lot of places (in that village) where illegal alcohol is available,” he stated.

Humanitarian workers in the region said that Dharmapuram has acquired the nickname ‘booze centre’ because of the free availability of illicit liquor.

“One of the disturbing trends is the prevalence of female headed households that have begun to sell illicit liquor as an easy income-generation method,” said a humanitarian worker who wished to remain anonymous because he was working with the families in question.

Homemade brews – typically derived from coconut, palmyra flowers or sugarcane – are cheap to make and easy to procure. Women in the north say they earn about 100 rupees (0.7 dollars) per litre of local moonshine. 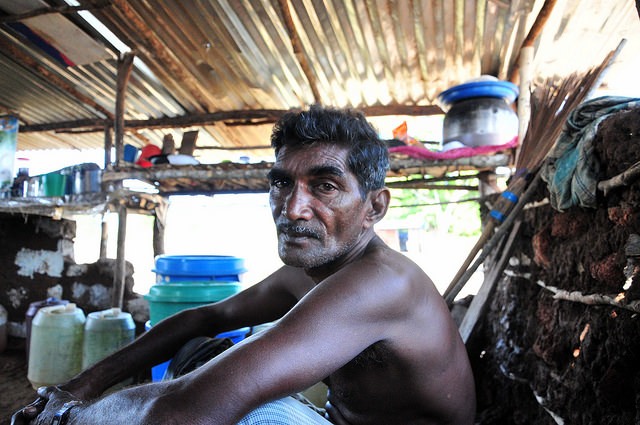 A man sits in his makeshift kitchen in the village of Dharmapuram after returning home drunk. Credit: Amantha Perera/IPS

Drinkers say that illegal alcohol can be obtained for less than one-fifth the price of the lowest-grade legal liquor.

“I haven’t seen this much alcohol here for almost 50 years,” Arumygam Sadagopan, a 60-year-old resident of Dharmapuram, admitted.

A retired education officer, Sadagopan told IPS that habitual drinking, especially among men, is exacerbating poverty and fueling domestic violence. He added that his neighbour’s family was now at “breaking” point due to the husband’s daily bouts of drinking.

“He has two school-going children who now mostly see their father drunk, reeking of alcohol and arguing or fighting with their mother,” he stated.

The end of the war in May 2009 not only removed restrictions on easy access to liquor outlets, it also removed social barriers that had kept consumption in check.

“There is a visible shift in consumption patterns in the war-affected areas from the days of the LTTE. They did not allow the northern citizens to drink moonshine (freely),” said G D Dayaratna, manger of the health and economic policy unit at the think-tank Institute of Policy Studies (IPS).

He also said that the LTTE kept a close tab on alcohol production in areas they controlled. All such safeguards crumbled along with the demise of the armed group.

Still, the situation is not specific to the former war zone. Islandwide alcohol production and consumption have seen sharp increases since the end of the conflict.

According to the World Health Organisation (WHO), the total alcohol per capita consumption rate among people aged 15 years and older between 2008 and 2010 was 20.1 litres.

There are no official figures available for the quantity of illegal, homemade alcohol but a 2002 study found that 77 percent of all liquor consumed in Sri Lanka was illicitly brewed. In 2013, fines for illegal liquor touched 127 million rupees (975,000 dollars).

Social workers like Thabendran said that the worst cases of alcohol abuse were visible in poor households in the northern province, where men were either unemployed or engaged in backbreaking daily paid manual labour. 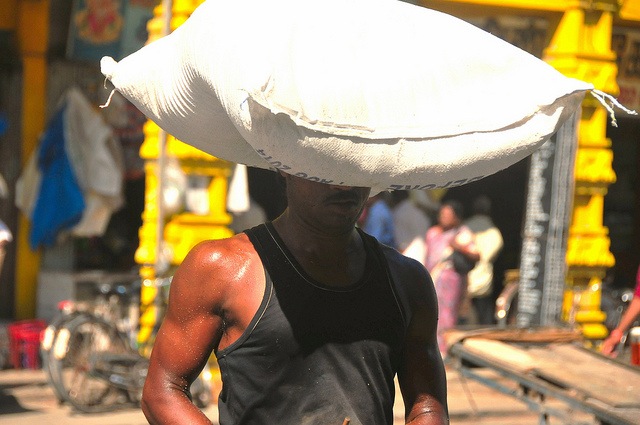 There are no official figures for full unemployment rates in the north. However, in the two districts where figures are available – 9.3 percent in Kilinochchi and 8.1 percent in Mannar – they were over twice the national rate of four percent.

Sarvananthan estimates that unemployment could be above 20 percent here in Dharmapuram, while employment in the informal sector, which includes agriculture, forestry, fisheries and day labour, hovers at just about 30 percent.

Poverty levels are also high in the province, with four of its five districts recording rates higher than the national average of 6.7 percent.

The three districts where the war was most intense, Kilinochchi, Mannar and Mullaittivu, record poverty rates of 12.7 percent, 20.1 percent and 28.8 percent respectively, according to the latest government poverty headcount released in April.

“When you look at alcohol consumption patterns, you see they have a direct correlation with the type of employment. Manual labourers and daily wage earners are more likely to consume alcohol at the end of the day,” Dayaratna pointed out.

Sadagopan has a simple solution to the alcohol menace, at least in the short term. “The laws against illicit brewing and selling should be strictly enforced,” he said. “The problem is, since our villages are in the interior, enforcement is lax.”