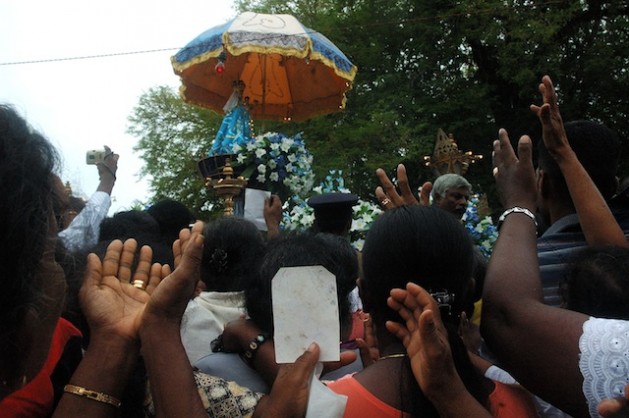 Devotees pray to the 500-year-old statue of the Virgin Mary as it is paraded around the Madhu Church during the annual festival. Credit: Amantha Perera/IPS

MADHU, Sri Lanka, Oct 27 2014 (IPS) - Rising out of a thick forest about 17 km from the nearest main road, the Madhu Church is a symbol of spiritual harmony and tranquility. When the wind blows you hear the leaves rustle. Other times a solemn silence hangs in the air. Old-timers say that once, almost an entire generation ago, the grass grew six feet high in the church compound, and elephants wandered through it.

Located some 300 km by road from Sri Lanka’s capital Colombo, this place is the most venerated Catholic shrine in the country, home to a 500-year-old statue of the Virgin Mary that millions of faithful people believe to be miraculous.

But the peaceful hush that surrounds this holy place is likely to be broken in the months to come.

“[Our Lady of Madhu] has survived so much for so long and is still with us, protecting us, keeping us safe." -- Benedict Fernando, a pilgrim from the coastal town of Negombo
Heavy construction work takes place round-the-clock here, as efforts to rebuild the side chapel of the Sacred Heart slowly bear fruit. It was severely damaged during a shelling incident in 2008 that, according to some priests, killed over three-dozen people who were seeking shelter, and left 60 injured.

New residential quarters are also underway and about four km from the church a new helipad is being planned. All this for the scheduled visit by Pope Francis set to take place during the second week of January 2015.

“It is a blessing from God, people not only here but all over the island are waiting to see him and hear him at this Church,” said Rev. S. Emilianuspillai, the administrator of the shrine.

The papal visit will be the crowning moment for the church and the relic enshrined within that survived some of the most turbulent and violent years of Sri Lanka’s modern history.

The administrator told IPS that despite some reports that the visit could be cancelled due to impending presidential elections, preparations were going ahead.

Located in the northwestern Mannar District, the church was within the war zone for much of Sri Lanka’s three-decade-long conflict. When heavy fighting engulfed the church compound in April 2008, it had been under the control of the separatist Liberation Tigers of Tamil Eelam (LTTE) for over a decade. The war ended a year later with the defeat of the Tigers by government forces.

Emilianuspillai still recalls those harrowing days six-and-a-half years ago when he and 16 others were trapped within the church as shells exploded all around. By 6.30 pm on Apr. 3, 2008, a decision was made to move the statue to a safer place. It was a journey fraught with danger, Emilianuspillai, said. Just a mile into the trip a shell fell right in front of the vehicle containing the relic, which the priest had cradled to his own body for safekeeping. “Absolutely nothing happened to it, or us,” he said. 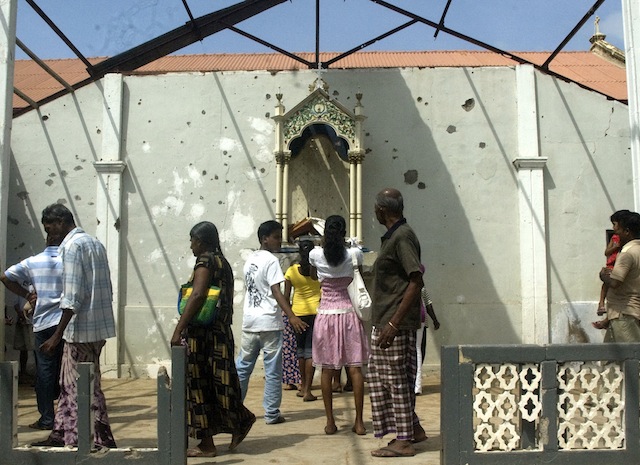 Worshippers gather near the damaged chapel of the Sacred Heart in August 2009, just three months after the war’s end. Credit: Courtesy Amantha Perera

Little less than a year-and-a-half later, in August 2009, the same church compound was filled with over half a million worshippers for the first annual post-conflict feast, all seeking the blessings of their beloved Mother of Madhu.

Devotees revere the statue as a symbol of unity and peace, bringing together Tamils and Sinhalese, as well as Muslims, Hindus and Buddhists, all of whom would mingle during the massive annual feasts.

In the early days of Sri Lanka’s conflict, Madhu was also one of the largest refuges for those fleeing the fighting.

“[Our Lady of Madhu] has survived so much for so long and is still with us, protecting us, keeping us safe,” Benedict Fernando, a pilgrim from the coastal town of Negombo, about 250 km south of Madhu, told IPS.

Tamils living in the Northern Province also hope that the papal visit will shed light on burning post-war issues that have remained unresolved. The region is one of the poorest in the country with poverty levels sometimes thrice the national average of 6.7 percent. It has also been hit hard by an 11-month drought and losses to the vital agriculture sector. This despite the injection of over six billion dollars worth of government funds since 2009.

“There is a lot more work to be done,” Sellamuththu Sirinivasan, the additional government agent for the northern Kilinochchi District, told IPS.

Other lingering issues include the over 40,000 female-headed families in the Northern Province, struggling to make ends meet in a traditionally male-dominated society.

With assistance from the U.N. and other agencies slowing to a trickle, such vulnerable groups have been left to fend for themselves.

“The economic situation has stagnated despite the large investments in infrastructure. In such an environment, even able-bodied and qualified men and women find it hard to gain employment. These single women with families are really vulnerable [to] exploitation,” Saroja Sivachandran, who heads the Centre for Women and Development in northern Jaffna, told IPS.

Then there are those who went missing during the war.

The International Committee of the Red Cross (ICRC) has just begun the first countrywide survey of the families of the war missing. The survey and its recommendations are to be handed over to the government sometime in mid-2015. But there is still confusion over the number of missing, which some have put as high as 40,000. The ICRC says that it has recorded over 16,000 cases of missing persons since the 1990s.

“The war has ended, but the battles continue for us,” said Dominic Stanislaus, a young man from the town of Mankulam, about 60 km north.

On first glance, the Vanni, the popular name for the northern provinces, seems generations removed from the war years. Glistening new highways have replaced barely navigable roads marked by crater-sized potholes left by shells. A new rail line linking northern Jaffna to the rest of the country after a lapse of a quarter of a century was inaugurated earlier this month.

But burning questions about when the missing will return home, or where the next meal will come from, remain unanswered.

Many, like Stanislaus and Fernando, pray that the papal visit will hasten the healing process. In the meantime, the Madhu Church will continue to bring hope to thousands who still live with the wounds of war.