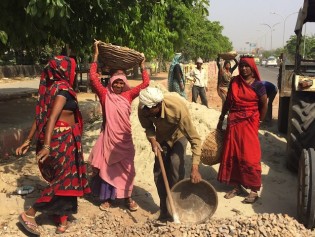 By Neeta Lal
As India paid glowing tributes to Bhimrao Ramji Ambedkar, the architect of its constitution and a champion of the downtrodden, on his 124nd birth anniversary last month, public attention also swivelled to the glaring social and economic discrimination that plagues the lives of lower-caste or ‘casteless’ communities – who comprise over 16 percent of the country's 1.2 billion people.

By Stella Paul
At 32, Nalluri Poshani looks like an old woman. Squatting on the floor amidst piles of tobacco and tree leaves that she expertly transforms into ‘beedis’, a local cigarette, she tells IPS, “I feel dizzy. The tobacco gives me headaches and nausea.”
ADVERTISEMENT ADVERTISEMENT