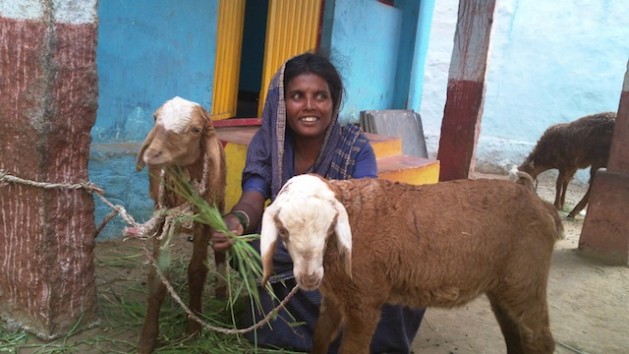 BELLARY, India, Apr 21 2015 (IPS) - HuligeAmma, a Dalit woman in her mid-forties, bends over a sewing machine, carefully running the needle over the hem of a shirt. Sitting nearby is Roopa, her 22-year-old daughter, who reads an amusing message on her cell phone and laughs heartily.

The pair leads a simple yet contented life – they subsist on half a dollar a day, stitch their own clothes and participate in schemes to educate their community in the Bellary district of the Southwest Indian state of Karnataka.

But not so very long ago, both women were slaves. They have fought an exhausting battle to get to where they are today, pushing against two evils that lurk in this mineral-rich state: the practice of sexual slavery in Hindu temples, and forced labour in the illegal mines that dot Bellary District, home to 25 percent of India’s iron ore reserves.

Finally free of the yoke of dual-slavery, they are determined to preserve their hard-won existence, humble though it may be.

Still, they will never forget the wretchedness that once defined their daily lives, nor the entrenched religious and economic systems in India that paved the way for their destitution and bondage.

From the temple to the open-pit mine

“Walk into any Dalit home in this region and you will not meet a single woman or child who has never worked in a mine as a ‘coolie’ (labourer)." -- Manjula, a former mine-worker turned anti-slavery activist from the Mariyammanahalli village in the Indian state of Karnatake
“I was 12 years old when my parents offered me to the Goddess Yellamma [worshipped in the Hindu pantheon as the ‘goddess of the fallen’], and told me I was now a ‘devadasi’,” HuligeAmma tells IPS.

“I had no idea what it meant. All I knew was that I would not marry a man because I now belonged to the Goddess.”

While her initial impressions were not far from the truth, HuligeAmma could not have known then, as an innocent adolescent, what horrors her years of servitude would hold.

The devadasi tradition – the practice of dedicating predominantly lower-caste girls to serve a particular deity or temple – has a centuries-long history in South India.

While these women once occupied a high status in society, the fall of Indian kingdoms to British rule rendered temples penniless and left many devadasis without the structures that had once supported them.

Pushed into poverty but unable to find other work, bound as they were to the gods, devadasis in many states across India’s southern belt essentially became prostitutes, resulting in the government issuing a ban on the entire system of temple slavery in 1988.

Still, the practice continues and as women like HuligeAmma will testify, it remains as degrading and brutal as it was in the 1980s.

She tells IPS that as she grew older a stream of men would visit her in the night, demanding sexual favours. Powerless to refuse, she gave birth to five children by five different men – none of whom assumed any responsibility for her or the child.

After the last child was born, driven nearly mad with hunger and despair, HuligeAmma broke away from the temple and fled to Hospet, a town close to the World Heritage site of Hampi in northern Karnataka.

It did not take her long to find work in an open-cast mine, one of dozens of similar, illicit units that operated throughout the district from 2004 to 2011.

For six years, from dawn until dusk, HuligeAmma extracted iron ore by using a hammer to create holes in the open pit through which the iron could be ‘blasted’ out.

She was unaware at the time that this back-breaking labour constituted the nucleus of a massive illegal mining operation in Karnataka state, that saw the extraction and export of 29.2 million tonnes of iron ore between 2006 and 2011.

All she knew was that she and Roopa, who worked alongside her as a child labourer, earned no more than 50 rupees apiece (about 0.7 dollars) each day. One of hundreds of illegal open-pit iron ore mines in the Bellary District in India that operated with impunity until a 2011 ban put a stop to the practice. Credit: Stella Paul/IPS

In a bid to crack down on the criminal trade, police often raided the mines and arrested the workers, who had to pay bribes of 200-300 rupees (roughly four to six dollars) to secure their release.

In a strange echo of the devadasi system, this cycle kept them indebted to the mine operators.

In 2009, when she could no longer tolerate the crushing workload or the constant sexual advances from fellow workers, contractors and truckers, who saw the former temple slave as ‘fair game’, HuligeAmma threw herself on the mercy of a local non-governmental organisation, Sakhi Trust, which has proved instrumental in lifting both her and her daughter out of the abyss.

Today all her children are back in school and Roopa works as a youth coordinator with Sakhi Trust. They live in Nagenhalli, a Dalit village where HuligeAmma works as a seamstress, teaching dressmaking skills to young girls in the community.

The story may have ended happily for HuligeAmma and Roopa, but for many of India’s roughly 200 million Dalits, there is no light at the end of the tunnel.

Once considered ‘untouchables’ in the Indian caste system, Dalits – literally, ‘the broken’ – are a diverse and divided group, encompassing everyone from so-called ‘casteless’ communities to other marginalised peoples.

Under this vast umbrella exists a further hierarchy, with some communities, like the Madiga Dalits (sometimes called ‘scavengers’), often discriminated against by their kin.

Historically, Madigas have made shoes, cleaned drains and skinned animals – tasks considered beneath the dignity of all other groups in Hindu society.

Most of the devadasis in South India hail from this community, according to Bhagya Lakshmi, social activist and director of the Sakhi Trust. In Karnataka alone, there are an estimated 23,000 temple slaves, of which over 90 percent are Dalit women.

Lakshmi, who has worked alongside the Madiga people for nearly two decades, tells IPS that Madiga women grow up knowing little else besides oppression and discrimination.

The devadasi system, she adds, is nothing more than institutionalised, caste-based violence, which sets Dalit women on a course that almost guarantees further exploitation, including unpaid labour or unequal wages.

For instance, even in an illegal mine, a non-Dalit worker gets between 350 and 400 rupees (between five and six dollars) a day, while a Dalit is paid no more than 100 rupees, reveals MinjAmma, a Madiga woman who worked in a mine for seven years.

Yet it is Dalit women who made up the bulk of the labourers entrapped in the massive iron trade.

“Walk into any Dalit home in this region and you will not meet a single woman or child who has never worked in a mine as a ‘coolie’ (labourer),” Manjula, a former mine-worker turned anti-slavery activist from the Mariyammanahalli village in Bellary District, tells IPS.

Herself the daughter and granddaughter of devadasis, who spent her childhood years working in a mine, Manjula believes the systems of forced labour and temple slavery are connected in a matrix of exploitation across India’s southern states, a linkage that is deepened further by the caste system.

She, like most official sources, is unclear on the exact number of Dalits forced into the iron ore extraction racket, but is confident that it ran into “several thousands”.

Annually, India accounts for seven percent of global iron ore production, and ranks fourth in terms of the quantity produced after Brazil, China and Australia. Every year, India produces about 281 million tonnes of iron ore, according to a 2011 Supreme Court report.

Karnataka is home to over 9,000 million tonnes of India’s total estimated reserves of 25.2 billion tonnes of iron ore, making it a crucial player in the country’s export industry.

With a population of 2.5 million people relying primarily on agriculture, fisheries and livestock farming for their livelihoods, Bellary District has suffered significant environmental impacts from illicit mining operations.

Groundwater supplies have been poisoned, with sources in and around mining areas showing high iron and manganese content, as well as an excessive concentration of fluoride – all of which are the enemies of farming families who live off the land.

Research suggests that 9.93 percent of the region’s 68,234 hectares of forests have been lost in the mining boom, while the dust generated through the processes of excavating, blasting and grading iron has coated vegetation in surrounding areas in a thick film of particulate matter, stifling photosynthesis.

Although the Supreme Court ordered the cessation of all unregistered mining activity in 2011, following an extensive report on the environmental, economic and social impacts, rich industrialists continue to flout the law.

Still, an official ban has made it easier to crack down on the practice. Today, from the ashes of two crumbling systems – unlawful mining operations and religiously sanctioned sexual abuse – some of India’s poorest women are pointing the way towards a sustainable future.

From servitude to self-reliance

Their first order of business is to educate themselves and their children, secure alternative livelihoods and deal with the basic issue of sanitation – currently, there is just one toilet for every 90 people in the Bellary District. Dalit women and their children, including young boys, are working together to end the system of ‘temple slavery’ in the Southwest Indian state of Karnataka. Credit: Stella Paul/IPS

The literacy rate among Dalit communities in South India has been found to be as low as 10 percent in some areas, but Madiga women are making a massive push to turn the tide. With the help of the Sakhi Trust, 600 Dalit girls who might have missed out on schooling altogether have been enrolled since 2011.

Today, Lakshmi Devi Harijana, hailing from the village of Danapura, has become the first Madiga woman in the region to teach in a college, while a further 25 women from her village have earned their university degrees.

To them, these changes are nothing short of revolutionary.

While some have chosen to travel the road of intellectual advancement, others are turning back to simple skills like sewing and animal husbandry.

BhagyaAmma, once an exploited temple slave who also worked in an illegal mine for several years, is today rearing two goats that she bought for the sum of 100 dollars.

She tells IPS she will sell them at the market during the holy festival of Eid al-Adha – a sacrificial feast for which a lamb is slaughtered and shared among family, neighbours and the poor – for 190 dollars.

It is a small profit, but she says it is enough for her basic needs.

Although the government promised the women of Bellary District close to 30 billion rupees (about 475 million dollars) for a rehabilitation programme to undo the damages of illegal mining, the official coffers remain empty.

“We have received applications from local women seeking funds to build individual toilets, but we have not received any money or any instructions regarding the mining rehabilitation fund,” Mohammed Muneer, commissioner of the Hospet Municipality in Bellary District, tells IPS.

Not content to wait around, the women are mobilising their own community-based, which allocates 15,000 rupees (about 230 dollars) on a rolling basis for families to build small toilets, so that women and children will not be at the mercy of sexual predators.

Also in the pipeline are biogas and rainwater harvesting facilities.

As Manjula says, “We want to build small models of economic sustainability. We don’t want to depend on anyone – not a single person, not even the government.”