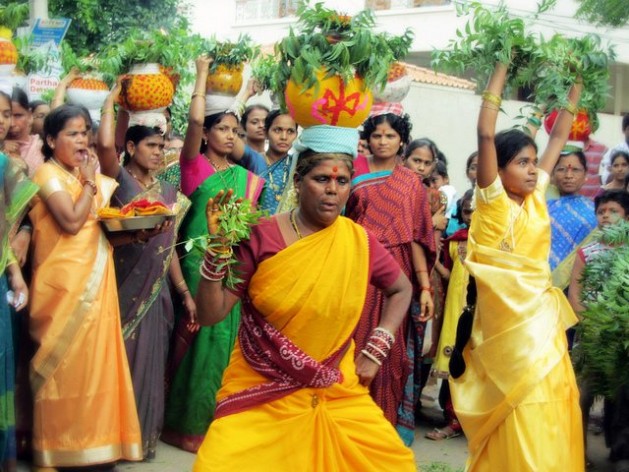 Joginis dance outside a temple during a religious festival. Credit: Stella Paul/IPS

NIZAMABAD, India, Jun 22 2014 (IPS) - At 32, Nalluri Poshani looks like an old woman. Squatting on the floor amidst piles of tobacco and tree leaves that she expertly transforms into ‘beedis’, a local cigarette, she tells IPS, “I feel dizzy. The tobacco gives me headaches and nausea.”

At the rate of two dollars for 1,000 cigarettes, she earns about 36 dollars a month. “I wish I could do some other job,” the young woman says longingly.

But no other jobs are open to her in the village of Vellpoor, located in the Nizamabad region of the southern Indian state of Telangana, because Poshani is no ordinary woman.

She is a former jogini, which translates loosely as a ‘temple slave’, one of thousands of young Dalit girls who are dedicated at a very young age to the village deity named Yellamma, based on the belief that their presence in the local temple will ward off evil spirits and usher in prosperity for all.

Poshani says she was just five years old when she went through the dedication ritual.

First she was bathed, dressed like a bride, and taken to the temple where a priest tied a ‘thali’ (a sacred thread symbolising marriage) around her neck. She was then brought outside where crowds of villagers were gathered, held up to their scrutiny and proclaimed the new jogini.

“Women here now see the jogini system as a violation of Dalit people’s human rights." -- Kolamaddi Parijatam, a rights activist in Vellpoor.
For several years she simply lived and worked in the temple, but when she reached puberty men from the village – usually from higher castes who otherwise consider her ‘untouchable’ – would visit her in the night and have sex with her.

Poshani says she was never a sex worker in the typical sense of the word, because she was never properly paid for her ‘services’. Rather, she was bound, by the dedication ritual and the villagers’ firm belief in her supernatural powers, to the temple.

The only time of year she was considered anything more than a common prostitute was during religious festivals, when she performed ‘trance’ dances as a divine medium through which the goddess Yellamma spoke.

But the majority of her nearly three decades of servitude was marked by violence, and disrespect.

Although a strong anti-jogini campaign in Vellpoor is making strides towards outlawing the centuries old practice, women like Poshani have little to celebrate. Though she relishes being free from sexual bondage, she struggles to survive on her own with no home, no land and a debt-burden of 200,000 rupees (about 3,300 dollars), which she borrowed from a local moneylender.

Visibly undernourished, Poshani represents the condition that most mid-life joginis find themselves in: sexually exploited, trapped in poverty, sick and lonely.

A cultural tradition or a caste-based system of exploitation?

According to official records, there are an estimated 30,000 joginis – also known as devdasis or matammas – in Telangana today. An additional 20,000 live in the neighbouring state of Andhra Pradesh.

In both states, over 90 percent of the joginis are from Dalit communities.

Temple prostitution has been legally banned in the state of Andhra Pradesh since 1988. Under the law, known as the Jogini Abolition Act, initiating a woman into the system is punishable with two to three years, and with a fine of up to 3,000 rupees (33 dollars).

But this is too soft a law for so heinous a crime, says Grace Nirmala, a woman’s rights activist based in the state capital Hyderabad. Nirmala, who heads an organisation called Ashray (meaning ‘shelter’), has been working for over two decades to rescue and rehabilitate jogini women.

“[Joginis] live away from their families and have no rights […],” Nirmala tells IPS. “Her life is completely ruined. For that, the punishment is a couple of years of jail time or a few thousand rupees in fines. How can this be justified?”

She added that most policemen in the state are not even aware of the law, which makes it hard to abolish the practice completely.

Superstition also plays a major role in keeping the tradition alive, with many villagers believing that joginis possess divine powers.

“Sleeping with a jogini […] is a way to invoke that supernatural power and please the goddess,” Nirmala explained. “In many families, if there is a nagging problem, the wife will ask her husband to go and sleep with the village jogini so that it will go away.”

Others, however, believe that India’s deeply entrenched caste-system is responsible for perpetuating this systematic abuse of so many thousands of women.

According to Jyoti Neelaiah, a Hyderabad-based Dalit rights leader, “The jogini system is not just a violation of women’s rights but a also of human rights, because it’s always a Dalit woman who is made a jogini and those whom she serves are always from a dominant caste.”

She tells IPS the whole system is, in fact, a “power play” by which dominant social groups oppress the weaker, more marginalised members of society.

In Telangana, for instance, some of the biggest supporters of the jogini system are members of the wealthy, land-owning Reddy caste, as well as Brahmin priests.

Kolamaddi Parijatam, a social activist who has been mobilising rural women against the jogini system for the past six years, including those in the village of Vellpoor, which is home to 30 joginis, shares Neelaiah’s analysis.

She refutes the theory put forward by various organisations and even scholars that the practice of dedicating women to the local temple has deep cultural roots and should therefore be preserved.

Given that Dalits comprise nearly 17 percent of the population of the newly created state of Telangana, activists say that villages like Vellpoor are well placed to lead the movement for legal reform.

“Women here now see the jogini system as a violation of Dalit people’s human rights,” Parijatam tells IPS. “So whenever anyone says that the jogini system is a cultural tradition, they ask: ‘Then why not make a non-Dalit woman a jogini?’”

Enraged at the government’s inability to clamp down on the practice, local women have doubled up as vigilantes in a bid to rescue women from the dedication ceremony.

“Dedications of joginis typically occur between the months of February and May when people in our region celebrate the festival of the goddess Yellamma,” Subbiriyala Sharada, head of an all-jogini women’s group in Vellpoor, tells IPS.

“Our group strictly monitors the celebrations and if we get to know a girl has been dedicated to the goddess, we immediately call the police.”

Having been apathetic to the plight of joginis for decades, police are gradually beginning to act in accordance with the law, largely due to pressure from local activist groups. However, their progress is very slow, and activists carry the lion’s share of the burden of reporting violations of the law and ensuring the arrest of perpetrators.

But this, too, only solves part of the problem, because as soon as the dedication ritual is performed, the girl will continue to live with the stigma – remaining vulnerable to sexual slavery – until she is either properly rehabilitated, or until the end of her life.

Activists are currently lobbying the Indian government to divert resources from its ‘Special Component Plan’ – which provides social and economic support to marginalised communities in the form of vocational training, financial loans and alternative livelihood opportunities – to the rehabilitation of joginis, who have long been excluded from government assistance schemes.

Their inclusion as legitimate recipients of aid would significantly reduce the burden on most jogini women, who struggle – among other things – to raise their children in a safe environment.

According to Neelaiah, children of joginis risk verbal abuse and alienation in the community if their mother’s identity is revealed. Girl children are particularly vulnerable, as they face the double risk of being trafficked or forcible dedicated to the deity in their mother’s place.

These girl children are in special need of protection, she says.

Both Neelaiah and Nirmala are helping to send children of joginis to school, which they feel is the best way to protect them.

Fifteen-year-old Prashant, son of a former jogini named Ganga Mani, is one of the lucky ones who managed to complete the 10th grade and is now planning to enroll in a high school.

Mani, who is barely literate, is pinning all her hopes on her son for a better future. “One day he will become a big police officer. Our life will then change,” she tells IPS with a smile.