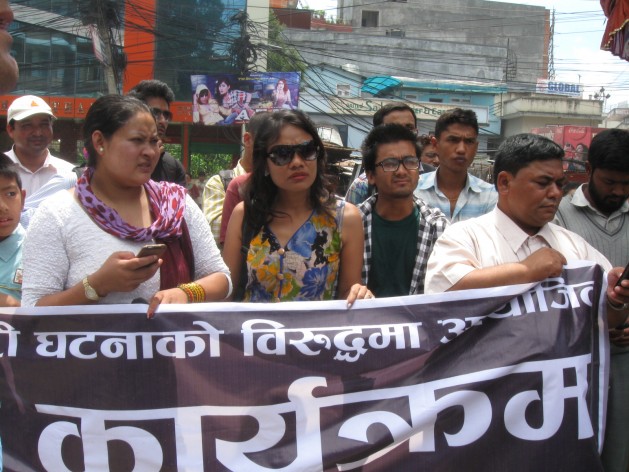 Protests over discrimination against Dalits in Nepal are delivering little. Credit: Mallika Aryal/IPS.

KATHMANDU, Feb 3 2014 (IPS) - Maya Sarki, a resident of Belbari in eastern Nepal, was returning home one summer evening last year when she was attacked. She was forced down on the ground and her attacker attempted to rape her.

She screamed. Locals came to her rescue and the attempt was thwarted. Sarki recognised the voice of her attacker as that of a neighbour and filed a police complaint.

The next day Sarki was met by a mob, led by her alleged attacker, at the village market. She was called derogatory names, her clothes were torn, and soot was smeared on her face. She was garlanded with shoes, beaten, and paraded around town. After the incident, Sarki fled the village.

In Dailekh in western Nepal, Sushila Nepali, 28, was raped by a local schoolteacher for years. She was forced to abort twice, but got pregnant again and gave birth to two children. Disowned by her family, Nepali has been living on the streets and begging for shelter and food.

“Dalit women are at the bottom of the caste and gender hierarchy in Nepal."

Sarki and Nepali are from different parts of the Himalayan nation, but what is common between them is their caste group – both belong to the socially marginalised Dalit community. Sarki’s attacker and Nepali’s rapist were both high caste Hindus.

There are an estimated 22 Dalit communities in Nepal. Researchers and Dalit organisations say they make up 20 percent of the country’s 27 million population. Dalits are considered to be at the bottom of Nepal’s 100 caste and ethnic groups.

They bear a much bigger burden of poverty, with 42 percent Dalits under the poverty line as opposed to 23 percent non-Dalits.

After a long political impasse, Nepal went back to polls in November. After two long months of negotiations, new assembly members are now finally sitting down and writing a new constitution. But experts say even in the new assembly, the Dalit community is the most under-represented, with only seven percent, or 38, of the 575 Constituent Assembly members being Dalit.

Rajesh Chandra Marasini, programme manager at the Jagaran Media Centre, an alliance of Dalit journalists formed to fight caste-based discrimination, worries that Dalit related issues would, once again, not get priority in the new constitution.

“I am concerned that the new Dalit assembly members would take the party line and become a mere physical presence,” he told IPS. “I fear that Dalit advocacy would become an afterthought.”

Nepal’s Civil Code 1854 had legalised the caste system and declared the Dalit community as ‘untouchable’. In a Hindu hierarchical structure, such a label dictates where Dalits can live, where they can study and where they can socialise.

In 1963, caste-based discrimination was abolished in Nepal and the National Dalit Commission was formed. In 2011, the Caste Based Discrimination and Untouchability Act was passed.

Yet, Dalits continue to be marginalised.

“Violence against the Dalit community is ignored or often goes unreported and unnoticed in Nepal,” said Padam Sundas, chair of Samata Foundation Nepal, a research and advocacy organisation that works for the rights of the marginalised community in Nepal.

Dalits are still barred from community activities such as worshipping in same temples as higher caste Nepalis. The higher castes don’t eat the food touched by members of the Dalit community or even use the same community tap that Dalits use for water. And women are the worst affected.

“Dalit women are at the bottom of the caste and gender hierarchy in Nepal,” said Bhakta Bishwokarma, president of the Nepal National Dalit Social Welfare Organisation (NNDSWO), which works to eliminate caste-based discrimination in Nepal.

“Dalit women’s suffering is triple-fold – society discriminates against them because they are women, then they are discriminated against because they belong to the Dalit community, and within their own community they suffer all over again for being women,” Bishwokarma told IPS.

Women’s rights activists say Dalit women are the most vulnerable.

“If you study the cases of women who are accused of being ‘witches’, they are usually Dalit women. They are the ones to be trafficked easily, they are the ones who work in terrible conditions,” said Durga Sob of the Feminist Dalit Organisation (FEDO) that works closely with the government on Dalit gender issues.

Activists say when Dalit victims of violence want to file a police complaint, they are discouraged.

“They are told that getting the law enforcement authorities involved would disturb social harmony, and victims are encouraged to informally reconcile,” said Bishwokarma. “No one is held accountable for any discriminatory acts against Dalits.”

News of the attack on Sarki received wide media coverage, and the attack and was severely condemned. A few days after the story broke activists gathered in front of the offices of Nepal’s policymakers and organised a protest. It saw a handful of women’s rights activists and allies standing with banners, demanding that the government act.

“The activists stood there for a few days, handed a memorandum to the government and the issue died down,” said Bindu Thapa Pariyar of the Association for Dalit Women’s Advancement of Nepal (ADWAN).

Researchers say there are major reasons why Dalit issues don’t get noticed.

“We have all kinds of acts and laws in place, but they are never implemented and even when we have tried to implement them, victims don’t get justice,” said Sob of FEDO.

She recommends that the legislation be made simple and local law enforcement authorities be trained, so they understand the rights of Dalit people.

Some activists say the Dalit movement has lost its momentum.

“We cannot think of Dalit activism with a ‘donor supported project implementation’ approach,” said Pariyar of ADWAN. “When the project money runs out, we move on but that doesn’t necessarily mean we have achieved what we set out to do.”

In Sarki’s case, for instance, there were issues of her rehabilitation, psychological trauma counselling, the safety of her family and her safe return home.

“Rights activists need to think long-term, a protest only nudges policymakers, real work happens with the victims in the field,” said Pariyar.

She calls for a stronger leadership in Dalit advocacy.

“The Dalit lawmakers may be under pressure from their parties, but we need watchdogs outside the assembly so that we can keep pushing them to make the right decision,” said Pariyar.

“If we don’t push now, when a new constitution for the nation is being written, we will never do it,” she said.