RIGHTS-CAMBODIA: Painter to Meet His Jailer at Khmer Rouge Trials

BANGKOK, Feb 14 2008 (IPS) - Sometime this year, two men who stood on either side of the genocide unleashed in Cambodia in the 1970s may finally face each other in a special war crimes tribunal in Phnom Penh. 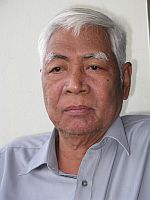 For one of them, Vann Nath, it is a moment that he has waited patiently for over almost three decades. He was one of only seven people who came out alive from Tuol Sleng, a high school in the Cambodian capital that was converted into a prison during the Khmer Rouge regime’s brutal grip on power from April 1975 to January 1979. At least 14,000 people who were imprisoned there were not as fortunate. They were all tortured and killed.

The other is Kaing Khek Eav, or ‘Duch’, who was the chief jailer of Tuol Sleng, or S-21, as it was known by the extremist Maoist group. He is currently under custody, along with four other surviving leaders of the Khmer Rouge, of the U.N.-backed war crimes tribunal. The Extraordinary Chambers in the Courts of Cambodia (ECCC), as the special tribunal is officially called, is expected to hear its first case this year.

‘’I have been hoping for this tribunal for nearly 30 years. I wanted the Khmer Rouge leaders to face justice for what they did,’’ says Nath, who has carried the torment of his one year in S-21 since he found freedom in January 1979. ‘’I will go and attend the trial of Duch to see if the tribunal will deliver a good verdict.’’

But the 61-year-old, who has a shock of white hair and thick black eyebrows that have whitened at the edges, is prepared to do more. ‘’I am ready to go and testify if the court needs me as a witness,’’ he said in an interview during a recent visit to Bangkok. ‘’I think it is a secret of the court: to invite me or not.’’

Such an appearance will inevitably add to Nath’s legendary status in his country. For not only is he an inmate who witnessed the horrors that unfolded in S-21, but he has made it his mission, since his freedom, to tell the story of his nightmare through paintings that have a raw, immediate and blunt quality. They are frozen moments of agony that have flowed from his memory.

The exhibitions of his paintings since 1980 – the first in the Tuol Sleng Genocide Museum – have scenes of prisoners being whipped and their fingernails pulled out, of one having his neck sliced by a Khmer Rouge guard, and of a mother being beaten as her baby is grabbed from her hands by a prison guard. His most recent exhibition, which opened in Bangkok this month, has disturbing portraits of prisoners in chains and an emaciated figure of Nath being led away by two prison guards.

They are paintings, moreover, that have come to graphically represent the horror of the Khmer Rouge regime, which was responsible for killing close to 1.7 million people, nearly a quarter of the country’s population at the time. Most of the Cambodian victims, even babies, were either executed or died due to forced labour or starvation. Among them were two of Nath’s sons, who died of starvation while he was imprisoned.

But dredging up such memories for his next canvas brings little relief or creative joy. ‘’When I paint the scenes of prisoners being dragged by the guards, it is still very hard for me,’’ he explained in a flat, controlled tone of voice. ‘’They bring back memories of my time there. It makes me go into the painting and remember the painful moments of that dark period.’’

In fact, a book Nath wrote about his experience in S-21 confirms how close to the truth his images of torment are. During an encounter with ‘’the former butcher of Tuol Sleng,’’ as he described a former prison guard, Nath asks him how accurate the images of the prison were. ‘’No, they are not exaggerated,’’ the guard had said during that early 1996 meeting. ‘’There were scenes more brutal than that.’’

‘’Did you see the picture of the prison guards pulling a baby away from his mother while another guy hit the mother with a stick?’’ Nath writes in his book, ‘A Cambodian Prison Portrait’, of the question he next posed to the now freed Khmer Rouge guard. ‘’What did you and your men do with the babies? Where did you take them?’’

‘’You killed those small babies? Oh God!’’ writes Nath of his pained response. Then, he adds: ‘’My words dried up. His last statement was not a lie. All these years, in the back of my mind, I had always thought that they had spared the children.’’

Yet the ‘Painter of Tuol Sleng’ is the first to admit his work as an artist, which evokes so much pain, is also the reason why he survived the prison. For when Nath, who was born into a poor farming family, was arrested and dragged into S-21, he was singled out for his talent. Till then, he had been a painter of billboards in Battambang, a city in north-west Cambodia some 300 km from Phnom Penh.

He was ordered by the prison’s tormentors to paint the portrait of a man he had little knowledge of – Pol Pot, the Khmer Rouge leader. His first painting, in black and white, was based on a black-and-white photo of the reclusive tyrant. Later, he shifted to a painting in colour.

He knew, then, that he was painting for his survival. There was no provision for error. Some of the other imprisoned painters who had been ordered to do likewise had been executed for their failure.

The final arbiter was Duch, who had said ‘’good’’ and ‘’it’s all right’’ after studying one of Nath’s portrait of Pol Pot.

Yet how good Nath was in the eyes of Tuol Sleng’s chief jailer came to light after the Khmer Rouge was driven from power by the Vietnamese army. In 1980, while working at the Tuol Sleng Genocide Museum, Nath was shown a list by a researcher examining the prison’s documents.

It was a list of prisoners that Duch had authorised to be killed on Feb. 16, 1978. On it was Nath’s name. But next to it was an entry written in red ink. ‘’Keep the painter,’’ it is reported to have said.