GALAPAGOS ISLANDS, Ecuador, Apr 24 2008 (IPS) - Juicy, wild-growing blackberries, guava and passion fruit plants may be savoured by humans and animals alike, but in this particular part of the world – sometimes called the Land That Time Forgot for its largely pristine biodiversity – they are three problematic invasive species. 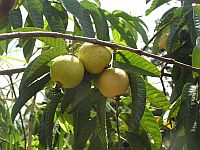 Guava is one of three invasive plant species that have taken root in the Galapagos Islands. Credit: Charles Darwin Foundation

“Blackberries choke plants and guava and passion fruit plants are both forms of vines, which both choke off all of the plants growing around them and also reduce sunlight,” explained Ramiro Tomala, an Ecuadorian-born naturalist guide for the Galapagos National Park.

While invasive species of mammals – primarily cats, dogs, goats and pigs – and to some extent, human beings, have also been problems on some of the 13 islands which make up the Galapagos Archipelago, in many areas, plants have become the biggest headache for conservationists.

A programme to eliminate wild-growing blackberries from Santa Cruz Island, which is one of the more popular tourist destinations, began some years ago “but it is still going on,” Tomala said.

“The blackberries, the guava, the quinine (an alkaloid that grows in abundance and has been used to treat malaria) are forever growing down here,” said Javier Cando, who works as a naturalist guide for the Galapagos National Park.

Cando should know. He was born and raised not far from Puerto Ayora on Santa Cruz Island. His parents were cattle ranchers “and ever since I was a boy, my father has been trying to eliminate the guava and the blackberries. This has been going on for over 25 years and it has to be worked on constantly. I don’t think that these two can forever be eliminated, but they can be controlled,” Cando said.

Each of the 13 islands has its own distinctive ecosystem. For example, Bartolome Island, which was formed from a volcanic eruption millions of years ago, includes stretches of black rock as well as pristine beaches that are used by visitors for snorkeling or swimming. Sea lions and Galapagos penguins swim just offshore. Rays and sharks can be found in the waters in the island’s southern coast.

On Santa Cruz Island, there is a nesting colony of land iguanas, mockingbirds and Darwin’s finches – one of the 14 species of finches found in the Galapagos Islands. They are named after the 19th century English naturalist Charles Darwin, who spent 33 days in the area, which helped inspire his theory of evolution.

What does all of this have to do with invasive species? Everything, for the finches and other animals which migrate from island to island dispose of fruit seeds, and other materials, through defecation. The ever-shifting wind currents here blow these seeds all over and, depending on which island the seeds land, alien species are introduced.

To control the invasive blackberries, guava and passion fruit, pesticides are used, as well as old-fashioned manual labour – that is, pulling out the plants by hand.

Cats, dogs, goats and pigs – all invasive species – were introduced to the Galapagos Islands during the 1800s by sailors, who would often leave them behind intentionally in anticipation of returning someday. In the meantime, lacking any natural predators, the livestock colonies grew and grew.

“For the pigs, we shot them to eradicate them,” said Tomala. “The goats are another matter. Since they live in the highlands to survive, the goats are tough to get to. At one point, Santa Cruz Island had 130,000 goats.”

He continued: “One of the mottos down here is ‘adapt or die.’ Goats normally don’t drink saltwater, but since they had a limited amount of fresh water to drink, they actually adapted and came down from the highlands and learned to drink saltwater from Santa Cruz’s beaches.”

Tomala said that Galapagos National Park employees eventually reduced Santa Cruz’s goat population to 300 – by shooting and poisoning them – “and we’re still trying to get those last 300.” Cats and dogs were either poisoned or shot, for eradication purposes.

Tourists don’t get quite the same harsh treatment, but neither are visitors allowed in unchecked. Cando said that only 80 permits a year are granted by Ecuador’s government to travel agencies.

How do Ecuadorian officials balance the need for tourism with preservation? “It’s not so easy,” admitted Cando. “Tourism really started to grow here in the 1970s and it’s been growing ever since. But you have to remember that the tourists, and other people, don’t go to most of the areas of the islands. Even me, as a native Galapagogian, can’t go to certain islands.”

Tomala noted that “(Ecuador) needs both (tourism and preservation). It has to be controlled through strict rules, and the enforcement of those rules. We need tourism; we can’t stop it. And people in the towns cause more damage to the ecosystems than the tourists – by driving their cars which pump out exhaust fumes, by letting animals become feral, and by building inadequate sewage systems.”