RIGHTS: Climate a "Life and Death" Issue for Native Peoples

UNITED NATIONS, Apr 23 2008 (IPS) - Leaders of the world&#39s 370 million indigenous peoples are calling for the United Nations to include their voices in its future talks on climate change. 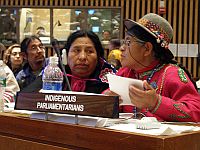 "Both the climate change and its solutions are concerns for indigenous peoples," said Victoria Tauli-Corpuz, chairperson of the U.N. Permanent Forum on Indigenous Issues.

"The indigenous peoples contribute the smallest ecological footprints on Earth," according to Tauli-Corpuz, "but they suffer the worst impacts from climate change and mitigation measures, such as the loss of land and biofuel production."

Despite representation from nearly 500 aboriginal groups worldwide, the Forum is not empowered to enact laws; it can only advise the Economic and Social Council (ECOSOC), a 54-member U.N. body, whose members are elected by the General Assembly every three years.

Last year in September, the General Assembly passed a historic resolution calling for the recognition of indigenous peoples&#39 right to control their lands and resources, but fell short of saying the "Universal Declaration on the Rights of the Indigenous Peoples" was legally binding.

Indigenous leaders they want both the governments and private corporations to incorporate the declaration into their national economic, political, cultural and environmental policies, so that indigenous people can participate in the process of development in a meaningful way.

"The indigenous peoples have observed and felt the impact of climate change before anybody else," said Tauli-Corpuz. "They are becoming &#39environmental refugees&#39 [because] small island states are sinking due to rising sea-levels."

According to Fiu Elisara, executive director of the Ole Siosiomaga Society of Samoa island, climate change has become "a life-and-death" issue for the Pacific island states, also known as the "liquid continent".

"One cyclone is enough to completely wipe out one island state," he said, adding that 90 percent of the people in the Pacific are indigenous who have nowhere to turn to for help because most of their rulers have not signed the declaration.

Indigenous leaders say many of their communities in mega-biodiverse countries, such as Indonesia, Malaysia, and Brazil are greatly suffering due to extensive use of their lands and forests for biofuels in the name of carbon-trading and climate change mitigation.

Tauli-Corpuz said such activities are being carried out by governments and private corporations without the "prior and informed consent" of the indigenous peoples, an issue that environmental organisations and indigenous groups have repeatedly raised at various international forums.

Elisara and other indigenous leaders say they intend to press U.N. member states to recognise the principle of "prior and informed consent" in its legally-binding treaties concerning sustainable development and environmental preservation.

The U.N. Convention on Biological Diversity (CBD) promotes and protects the ownership by indigenous people of their traditional knowledge, but the principle of "informed consent" for the use of indigenous lands is not part of its provisions.

In supporting the indigenous peoples&#39 demand, the CBD executive secretary Ahmed Djoghlaf said he would like to see the treaty be translated into "national laws and national actions".

"The convention has a unique procedure that recognises the indigenous peoples as partners," he told IPS. "It&#39s the first international convention to have a fully fledged programme and full-time team dedicated to the issues of indigenous peoples and the protection of the knowledge that has been accumulated over millennia."

Tauli-Corpuz and other other representatives of the Forum said they want the U.N. member countries to translate the declaration into a "living document", but acknowledged that would not be an easy task, because some powerful nations are still reluctant to embrace it.

Last year in September, when a vast majority of the U.N. General Assembly supported the declaration, the United States, Canada, Australia, and New Zealand cast their votes in opposition. However, recently both Canada and Australia issued statements indicating their willingness to endorse the declaration.

Some countries with large indigenous populations, such as Bolivia and Ecuador, according to Tauli-Corpuz, have assured the Forum that they were willing to adopt the declaration as part of their national laws.

At a news conference Monday, Bolivia&#39s indigenous president, Evo Morales, said the indigenous peoples have the moral authority to shape "a new model for living" because "they live closely to Mother Nature and have defended it for ages."

"Mother Earth is the wellspring of life that must be cherished and respected rather than treated as a tradable commodity," he added in a statement highlighting the significance of the role of the indigenous peoples in protecting the environment and preserving Earth&#39s biodiversity.

During the two-week meeting, the Forum leaders said they would recommend a number of proposals to the U.N. member states, including the one concerning their demand for participation in the international decision-making on climate change mitigation.