MEDIA: Against Giant Odds, A Touch of Triumph

GLASGOW, Jun 27 2008 (IPS) - Parents call it the strawberry coloured nightmare. In the suburbs of Cape Town in South Africa they call it 'tik'. Something that mimics the effect of adrenalin. The news feature on 'tik' explores its dangerous spread, interviewing parents and others who talk about the devastation this addiction is bringing to homes and lives. 'Tik' is coloured pink, we learn, to make it more attractive to teenagers. 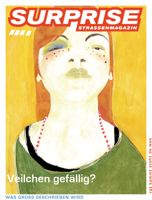 A telling feature, but there is more.

A report from Germany explores the exploitative realities of a world everyone encounters obliquely, and never thinks about – hotel room cleaners. The report establishes that many of these cleaners are paid only two to three euros an hour, far less than the 7.87 euros stipulated by law or even the 6.30 by some interpretations.

A remarkable and exhaustive investigation spread over weeks begins with writing to 200 hotels in Hamburg to find out what cleaners are paid. The group sets up its own system of awards for hotels that play fair – five stars for the best. As it turns out, there aren't that many of these five-star hotels.

The investigation digs deep into employment cartels, into 'outsourcing' agreements that hotels make that give them advantages while disowning responsibility, and exposes a world of subtle threats to workers who might dare to complain. It's an investigation into life "behind the curtains of the hotel business" that the best of media could be proud of.

Or, take an interview with Angela Davis, the U.S. reformer with the daring record in communism and prison reform, who sees corporations and media as complicit in a system that incarcerates predominantly the poor and deprived. No, a proper interview would not be possible, the reporter was told, but he could grab time with her in a taxi to the airport. A sparkling, stimulating interview follows; one of the more interesting questions arises from a road sign on way to the airport.

And where did these reports appear? Almost certainly nowhere you've heard of (The Big Issue South Africa, Hinz&Kunzt, Germany, Real Change, U.S.). These are triumphs of the unsung world of street newspapers.

These are independent newspapers and magazines sold by homeless and severely disadvantaged people on street corners around the world, the International Network of Street Papers (INSP) explains. The papers give their vendors a living, and their writers a voice.

"Since 1994, INSP street papers have enabled approximately 250,000 marginalised people to earn a dignified income, make their voices heard, and build relationships across harmful social boundaries," the Glasgow-based INSP says. Between them, street papers around the world have a readership of 32 million, and now their own news service to keep them supplied, often with offerings from other street papers around the world. Because everywhere, life on the street brings some bleak similarities.

And that holds all the way from the supposed 'first' world to the 'third'. Mel Young pioneered street media in Britain with his production of The Big Issue, and now he looks beyond it.

"At a time when the gap between rich and poor is growing, and with millions of people still living on the streets or in dire poverty, street papers provides a very immediate response to a human need; both a dignified employment opportunity and a way to integrate back in society," says Young, honorary president of INSP. "Perhaps most importantly, it will highlight the efforts of journalists working in the area of social justice globally, an area that is very important, but not properly recognised."

In recognition of that, INSP organised international street newspaper awards for the first time in Glasgow last week. These awards, covering the spectrum across features, photographs, interviews and so much else that goes into journalism, drew 120 entries from 41 street papers, across 24 countries on six continents. Awards were handed out at an event at the grand Kelvingrove Art Gallery and Museum. The awards dug the excellence out of street media.

"There's a reason our vendors aren't selling apples or t-shirts or telephone plans, all of which could, perhaps, be more lucrative in a world where reading is increasingly out of fashion," says Lisa Maclean, INSP Executive Director. "Through our independent perspectives, alternative voices and engaging advocacy journalism, street papers offer something different. While presenting an innovative answer to the urgent needs of disenfranchised people, street papers also contribute to longer-term and deeper systemic change through the pages of our newspapers and magazines."

So what do some homeless people do in Brazil for Christmas? Wait for a charity to offer them an economy cake? Yes, some do. Or for some Good Samaritan in the neighbourhood to set up a charity party? Yes, some wait for that, too. But the paper Boca de Rua in Brazil did it another way. It produced a simple To Do list for 'A Handmade Christmas' and 'A Penniless Christmas'. To show how to take what is freely available, and turn it into a party. Celebration does not have to come with a price tag attached.

– Make up a Summer Santa because it's too hot here. There can't be any boots, he will wear colourful flip flops and speedos and instead of a sleigh he will be in a pool. You can draw him and give the drawing to someone you like or you can dress someone up as Summer Santa and go around the neighbourhood telling everyone that Santa's on holiday.

– Start saving scraps to make decorations for your Christmas tree. You can make a tree out of a bottle, cotton and yogurt cup. Scrap can also be useful for making presents…

Boca de Rua is run by volunteer journalists and social workers who sell the paper to fund the content produced in weekly workshops. A children's workshop produces a special insert.

Two years ago a building offered them space for workshops twice a week. That is now withdrawn, and so the project is on the streets again. In the rightness of things, cynics might say. But the group is carrying on in the spirit of its prize-winning article. If members must meet in a park, so they will; it does not always rain. And when it does, they will find space under some building somewhere, as they did before. And to carrying on showing ways to rescue spirit out of homelessness, and to engage in journalism beyond that.

Already, against the most seemingly impossible odds, people off the bleak margins of the have-nots have shown themselves doing better than many from the stables of the Rupert Murdochs and the Thomsons and the Berlusconis of the world. How's that for a touch of triumph.