SOUTH AMERICA: How to Atone for Beef’s Sins

RIO DE JANEIRO, Jun 21 2008 (IPS) - The global food crisis and climate change have cast the spotlight on negative aspects of the cattle industry, such as the high consumption of vegetable protein to generate relatively little meat, and the sector’s role in global warming. 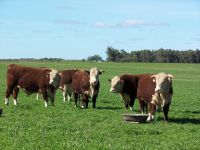 Because of its cattle, Brazil is among the world’s leading emitters of greenhouse gases. The livestock industry has encroached on the Amazon rainforest and is a leading cause of deforestation. According to its first national inventory, in 1994, logging represented 75 percent of Brazil’s greenhouse gases.

The destruction of forests, which has accelerated since the 1980s, coincides with the expansion of cattle-raising. From 1994 to 2006, the national herd grew from 158 million to 205 million head, and 82 percent of that increase took place in the Amazon region, according to the study “The Cattle Kingdom” by the environmental group Friends of the Earth-Brazilian Amazon, released in January.

Cattle in the country’s Amazon jungle region, which numbered 73.7 million head in 2006, occupied 74 percent of the total deforested area.

However, the original cause of deforestation is not cattle-raising, but rather the lack of incentives for sustainable production in the Amazon, said Mario Menezes, assistant director of Friends of the Earth and co-author of the study. Without agricultural regulation, state oversight and development policies, “the expansion is chaotic,” he told Tierramérica.

Most land in the Amazon region is publicly owned, but the government does little to monitor it. Many ranchers occupy areas illegally, and spend little to clear the forests, says Paulo Barreto, a researcher with the Institute of Man and the Environment in the Amazon.

With productivity at little more than one head per hectare, Brazilian cattle hunger for cheap land. Deforesting the land – which carries little risk of penalty – then becomes a logical route.

In the Amazon, furthermore, cattle have found “sun, heat and water year round,” which means cheaper beef, “competitive despite the distance” to industrial centres, Assuero Veronez, head of the environment committee of the Agriculture and Livestock Confederation of Brazil, told Tierramérica.

To attribute three-quarters of Brazil’s greenhouse gas emissions to deforestation is a mistake, Veronez believes, because the calculation includes all of the area’s biomass, ignoring the fact that before the “quemadas” or slash-and-burn technique used to clear land, the useful lumber is removed and what burns is just 30 to 40 percent of the original biomass.

Tito Díaz, an animal health and protection officer with the United Nations Food and Agriculture Organisation (FAO) in Latin America, also underscored that “pastures fix carbon in their roots at a volume that is quite considerable and is not taken into account.”

But now “everything is banned” because of environmental issues, which leads to a “stranglehold on the Amazon region economy,” Veronez complained.

And the pressure is growing stronger. Brazil’s Consumer Defence Institute (IDEC) launched a campaign in March, “Change Consumption, Don’t Change the Climate”, urging the public and supermarkets to track beef origins and reject any that comes from cattle that have contributed to deforestation.

According to Lisa Gunn, IDEC information manager, beef “is not sustainable” because it comes from the conversion of a much greater quantity of food and plant protein into meat, and requires too much land. But it is only possible to change habits gradually, she says, which is why the institute is calling for reducing consumption of beef instead of eliminating beef from the diet altogether.

In pasture-fed cattle operations like those of South America, one kilogramme of beef is produced with 18 to 20 kilos of grass. For feedlot cattle, where the diet is based on grain, six to eight kilos are needed to produce one kilo of meat, according to Francisco Santini, veterinarian at Argentina’s National Institute of Agricultural Technology.

Cattle that are raised confined in feedlots require less space, but they also cause deforestation because they are fed soybeans, of which Brazil and Argentina are major producers. This effect is evident in the increase in deforested area in the Amazon each time there is a rise in the international price for soybeans.

Brazil’s greenhouse gas emissions tally must also include methane and nitrous oxide from cattle manure, which represent a relatively small volume of total emissions, but are 20 and 300 times more destructive, respectively, than carbon dioxide produced by forest fires.

In Argentina, 11 million hectares that previously served as pasture land for cattle have been converted to farmland over the last 14 years, while the national herd stands at 54 million head today. Methane emissions have declined with the increase in grain feed, said Santini. But the most recent data available indicate that agriculture generates 44 percent of the country’s greenhouse gas emissions, with an increased share from methane from cattle manure.

In Uruguay, which has 10 million head of cattle – three times the country’s population – in addition to 15.2 million sheep, agriculture accounts for 91 percent of the country’s methane emissions and is the country’s second leading source of greenhouse gases.

A 2006 FAO report estimated that livestock generated 18 percent of the world’s greenhouse gases, surpassing transportation as an emissions source. The calculation included the effects of deforestation, food production and its chemical inputs (pesticides and fertilisers), gases produced by livestock, meat processing and agricultural transport.

Across most of Latin America forests have been lost to livestock and soybean production, but Chile and Uruguay have increased their tree-covered areas, which indicates that livestock can expand “without putting an end to forests,” Díaz, the FAO expert, told Tierramérica.

The region has the advantage of feeding its herds with grass and other forage, which don’t compete with human food, given the high prices of the grains that Europe and the United States utilise in their heavily subsidised cattle industries, he said.

Sustainability is being pursued in Acre, a state in northwest Brazil, by integrating agriculture, pasture and forestry, which improves the productivity of small, medium and large properties. The yield reaches three head of cattle per hectare, three times the national average, reports Judson Valentim, head of the local centre of the government’s agricultural research agency, Embrapa.

Valentim admits that livestock production leads to deforestation as a result of cheap land, but says this can be corrected with higher productivity and with measures like the ban (beginning Jul. 1) on loans to farmers or ranchers who are involved in illegal logging.

Brazilian cattle-raising could be made sustainable with more productive technologies, with ranching limited to appropriate areas, and leaving aside land that is better suited to growing crops, he says.

But Barreto and Veronez agree that this would require policies that compensate for what has been invested in recovering degraded or more costly land, paying farmers and ranchers for environmental services, and changing the economic logic that currently favours deforestation.

(*Mario Osava is an IPS correspondent. Marcela Valente in Buenos Aires and Raúl Pierri in Montevideo contributed reporting. Originally published by Latin American newspapers that are part of the Tierramérica network. Tierramérica is a specialised news service produced by IPS with the backing of the United Nations Development Programme, United Nations Environment Programme and the World Bank.)