RAMALLAH, West Bank, Dec 28 2008 (IPS) - Anger, shock and revulsion at the continuing carnage in Gaza has ignited spontaneous demonstrations and riots across the West Bank and Israel, sparking concerns of a possible third Palestinian uprising or Intifadah. 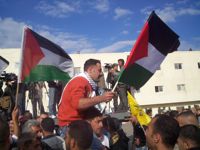 More than 300 Palestinians were killed and at least 900 wounded following an intensive Israeli air bombing campaign over the Gaza strip through the weekend.

This followed a barrage of rockets fired by Palestinian fighters at Israeli towns and cities bordering the coastal territory in the last few weeks which caused some damage but no casualties.

Hamas leader-in-exile, Damascus-based Khaled Meshaal, has called on Palestinians to rise up against Israel. The Palestinian Authority (PA) in the West Bank called for a three-day strike in sympathy with Gaza’s plight.

Following Israel’s aerial assault, one Israeli was killed and several wounded in retaliatory rocket fire from Gaza Saturday afternoon. This was Israel’s first fatality in many months.

The first Palestinian Intifadah broke out in December of 1987 when Palestinian refugees from a camp in the north of Gaza clashed with Israel soldiers following the death of several Palestinians after an Israeli settler’s car ploughed into their vehicle.

The Palestinians claimed the victims were deliberately mowed into, while the Israelis said it was the result of a traffic accident.

Following the initial clash, rioting and protests spread spontaneously to all of Gaza and the West Bank, leading to a popular uprising which lasted for several years. This followed years of Palestinian resentment and bitterness towards a brutal Israeli occupation.

Israeli-Arabs, descendents of the Palestinians, clashed Saturday with Israeli police throughout Israel.

In the Bedouin village of Rahat in the Negev desert, around 400 residents protested the attacks, while mosques throughout the town broadcast prayers of mourning. Many Bedouins, descendants of a nomadic tribe, join the Israeli army, where they are valued for their tracking skills. They are regarded as traitors by fellow Palestinians.

Several hundred left-wing Israelis marched through the streets of Tel Aviv towards the Israeli defence ministry headquarters chanting “No to war, yes to peace”.

The left-wing protestors carried signs saying “Israel’s government is committing war crimes”, “Negotiation instead of slaughter”, and “Lift the siege from Gaza”.

Several Israeli protestors were arrested. Matan Kaminer an Israeli student who took part in the protest told the Israeli daily Haaretz that “no one can tell us that slaughtering the citizens of Gaza is meant to protect the citizens of Sderot and Ashkelon (two Israeli towns bordering the Gaza strip).”

An Israeli police officer was deliberately run over by a Palestinian in East Jerusalem as groups of Palestinian youths clashed with police in the city, stoning them and setting dumpsters on fire.

Palestinian protestors from West Bank towns and refugee camps took to the streets and marched on Israeli checkpoints and Israeli settlements. Many were injured by rubber bullets – marble-sized metal balls covered in half a millimetre of rubber – and tear gas shot by Israeli Defence Force (IDF) soldiers.

In Ramallah hundreds of protestors from the various Palestinian factions waved banners and flags, and decried the Gaza slaughter. They called for unity and for Gaza’s Hamas leader Ismail Haniyeh and West Bank Palestinian Authority leader Mahmoud Abbas to bury their differences and put the Palestinian cause above their personal politics.

Many in the crowd waved Fatah flags, associated with Abbas and the PA, showing clearly their empathy with fellow Palestinians despite the political divide between the two Palestinian territories.

IPS joined the demonstration as it marched around Ramallah city. In the crowd were people from all sections of Palestinian society. Elegantly turned out middle-aged women from Ramallah’s Christian minority marched side by side with tough young men from the surrounding refugee camps.

Grandmothers, journalists, factional leaders, and mothers with toddlers walked linking arms with a scattering of international sympathisers based in the cosmopolitan central West Bank city. Many countries have representative offices to the PA in Ramallah.

This was one of the largest demonstrations that Ramallah witnessed in the last few years of conflict.

“I couldn’t just sit at home. I felt overwhelming anger at the situation in Gaza and I needed to show my solidarity,” Munther, a young computer programmer from the Palestinian Legislative Council who voted for Abbas in the last election told IPS.

As the crowd circled the city centre, the Palestinian police looked on quietly and stood back. But when the demonstrators marched on the Muqata, the government headquarters of the PA where Abbas was in his office, the mood of the Palestinian security forces changed.

On approaching the Muqata’s entrance the crowd was met by Palestinian soldiers who took up positions and held their weapons at the ready. But the Shebab, or youth in Arabic, decided to head towards the nearby Israeli military checkpoint of Beit El.

While the more cautious in the crowd stood back, the young men headed towards waiting Israeli military jeeps and tanks and started to sling stones at them, and set tyres alight to block the road.

The Israelis responded with tear gas and rubber bullets, injuring a number of youngsters who were rushed to nearby hospitals in Palestinian ambulances.

This IPS correspondent helped two youths injured by rubber bullets to hospital. They were shot as they stoned the soldiers.

As dozens of Palestinian riot police arrived on the scene to disperse the protestors, one of them remarked that the police arrival had been coordinated with their Israeli colleagues on the other side of the checkpoint.

“They are nothing but quislings and a militia of the Israelis. Hundreds of Palestinians were killed in Gaza, and who do they aim their weapons at? Not the Israelis but us, their brethren protesting the slaughter,” said one of the youths.

“There will be more protests tomorrow and I will be back,” he added, as he stepped out of the taxi and limped towards the emergency room.