SAN JOSE, Mar 5 2009 (IPS) - The government of Costa Rica hopes to increase its power generation by tapping into volcanic hot spots, and to that end it has introduced a controversial bill in Congress that would allow drilling into volcanoes in national parks. 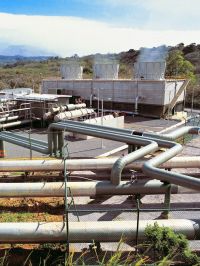 In January, the governmental Costa Rican Institute of Electricity (ICE) announced that it is contracting equipment for the geothermal power station of Las Pailas, on the side of the Rincón de la Vieja volcano, in the northwest province of Guanacaste.

The plant is scheduled to become operational in 2011, adding 35 megawatts to the 163.5 that are already supplied by the five units of the Miravalles volcano power station, in operation since 1994.

That same year, a third project, the Borinque, on the northeast side of the Rincón de la Vieja volcano, will be launched.

Geothermal power uses underground steam from volcanic regions. The energy is harnessed by extracting the heat from within the earth’s crust, in the form of a fluid that is used to move the turbines. Two holes are drilled in each case: one is used to draw hot water, and the flow of water is then cooled and re-injected into the other.

One of the goals of the ICE is to increase the percentage of geothermal energy that is channelled to the country’s power grid. ICE president Pedro Pablo Quirós told Tierramérica that several sites have been identified in northern Costa Rica, in an area stretching from the Poás volcano to the Nicaraguan border, from which up to 800 megawatts will be generated.

The problem is that these areas identified for geothermal power generation are located in national parks, and thus congressional authorisation is necessary, which explains the bill currently under consideration. Geothermal prospecting is similar to oil prospecting, with drilling usually penetrating 1.7 kilometres deep, but in some cases going down as far as 3.7 kilometres.

The opposition to the project comes from environmental organisations.

The president of the Wildlife Preservation Association (APREFLOFAS), Angeline Marín, told Tierramérica that she was “against the opening up of national parks for any purposes.”

Marín believes that by opening the parks up to tourism and putting their habitats at risk, the Ministry of Environment, Energy and Telecommunications has already demonstrated that it is incapable of implementing “precautionary” regulations. APREFLOFAS advocates other forms of power generation, such as solar and wind, “which are less harmful to the environment,” she said.

Marín fears the effects on wildlife, and suspects that the new power projects are not intended to meet domestic demand, but instead are export-oriented.

Quirós insists that the power generated by these plants will stay in Costa Rica. “We can’t tell the country to stop growing,” he said.

The use of existing natural resources and the “definition of regulations to protect the environment” are both essential to growth, he said. He also defended the ICE by pointing out that it is the largest investor in reforestation and that it promotes “environmentally-friendly” projects.

“There wasn’t a single tree” in Miravalles, “and today it is completely reforested,” Quirós said.

“If we can’t touch our natural sources, like water or steam, all we have left are nuclear plants,” he said.

In his opinion, geothermal power reduces the country’s dependency on imported fuel.

During the dry season, from December through April, the ICE consumes 90 percent of the national gas-fuel bill – some 260 million dollars – to keep its thermal plants running. Quirós claims that this expense will be cut in half as geothermal power generation increases.

Another advantage of geothermal power is that it is continuously generated, as it is not dependant on weather conditions, like hydroelectric power, which is stretched to its limits during the driest months, when water reserves are low.

Geologist Eddy Fernández, an expert on geothermal energy, says that it is “the ideal complementary source” for hydroelectric power, which accounts for around 80 percent of the country’s power generation.

There is a risk of pollution from toxic gas leakage, but safe operation can be achieved by re-injecting the gases, Fernández told Tierramérica.

Central America could become a leading geothermal power generator, as it is located in the Circum-Pacific Seismic Belt, an area of high volcanic activity in the Pacific coast, both in Asia and the Americas.

And, Fernández said, Costa Rica must position itself as the subregion’s leading geothermal producer, as “we have been researching this field since the late 1960s.”

The North Volcanic Mountain Ridge, in Guanacaste, is the ideal region for geothermal power generation, with its Miravalles, Rincón de la Vieja and Tenorio volcanoes. These are rural areas, and geothermal production would foster “their development, without harming the population,” he said.