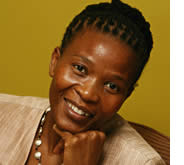 Gasa now works on issues such as cultural identity, gender inequalities and human rights. She just ended a three-week hunger strike in solidarity with the people of Zimbabwe and travelled to the United States to publicise the political and economic crisis there.

The hunger strike was part of an international relay fast aimed at pressuring other African governments to intervene in Zimbabwe’s impasse, called by the Save Zimbabwe Now! Solidarity Campaign.

IPS: A big part of your hunger strike was to encourage other African governments to put pressure on Zimbabwe to release political prisoners. What is the status of political prisoners there? NG: Some have been released, but there are many political prisoners still in Zimbabwe. The prisoners are MDC [opposition Movement for Democratic Change] people, activists, journalists, women’s organisations, everything. They have broken no laws and have been given no trials.

Even the ones who have been released, their condition is bad. In order to get out they have been made to waive their rights to any compensation or legal recourse about what had been done to them.

IPS: Last year’s disputed presidential election between long-time incumbent Robert Mugabe and the MDC’s Morgan Tsvangirai received a lot of international attention. Do you think the resulting power-sharing deal has been successful at all? NG: It is very clear Zimbabwe is not moving anywhere. A different approach to change is needed. The power-sharing deal is not working because many of the agreements have not been honoured. This situation is now of great concern to many other African governments because it is so unstable.

[Ruling party] ZANU-PF undermines human rights and has now broken the power-sharing deal. [There is] no real recognition from the government of the deal or that it has to be upheld or respected at all. There is also no transparency, so people do not know what is going on.

IPS: What is the situation for women in Zimbabwe now? How do the economic, political and health crises affect the status of women? NG: All of the crises affect women more severely. One important issue is the widespread use of rape as a political weapon. And there has recently been a noticeable change in the way security forces relate to women.

When Jestina Mokoko was arrested she was in only a nightdress. She asked if she could get dressed before she was taken but security denied her the right to her dignity by not allowing her to change clothing or take her female medication with her.

And of course widespread shortage of food affects women more because they are always the last to eat. Even though they forage more food, after the men and the children eat it is the women’s turn, but by then there is nothing left.

IPS: Another issue caused by the crises in Zimbabwe is that of refugees in South Africa and elsewhere. What is the human rights situation in the camps? What is the impact on women? NG: Of course the refugees are one of the biggest problems. There are so many, and the conditions are so bad. Sexual violence is very common and there are no provisions for pregnant women.

There have been no attempts to remedy this by the South African government [which is hosting most of the refugees]. Also many camps are unsafe. Many are technically not camps, but “open grounds” where people just settle, and there is no security and no protection.

Local government in South Africa is not helpful because even though the national government may make promises to protect and help the refugees, the local governments do not honour these promises. The law says the refugees have the right to go to clinics and get treatment, but in reality they can get no assistance.

IPS: Joyce Mujuru, the current vice president of Zimbabwe, was a freedom fighter in the war of independence and is one of the highest-ranking women in governments in Africa. How does her position affect women in Zimbabwe and the perception of gender roles? NG: Many women in Zimbabwe have become much more strident in pushing for women’s rights, but Mujuru is not one of them. In inter-party politics the women who make it to the top and to positions like Mujuru’s are the ones who will not rock the boat. They are traditional in the sense of supporting their husbands and not advancing the women’s agenda.

After the war of independence, women soldiers for liberation by and large did not continue fighting for women’s rights, but settled back into their family roles. Mujuru is in her position because the people in power feel comfortable with her. Because of this courageous women fighting for their rights have taken a lot of strain and pain.

IPS: How do you rate the efforts of the international community and the African Union (AU) to end the crisis? NG: Frankly the AU is better, but not much. Right now, all of us who are interested in an equitable, just and stable Zimbabwe have to support the current agreement, but we have to be vigilant that it is what it is supposed to be.

The international community must not be complacent here. It is more complicated than we would like to acknowledge, so we must be careful and creative. There must be a flow of aid into Zimbabwe that is not able to be manipulated or misused on a large scale.

We are hopeful that the new administration of the United States will grant a special envoy to Zimbabwe talk to local people, average people who are suffering and understand their perspective and what they actually need. Then it is time to talk about lifting sanctions and how to aid Zimbabwe responsibly.