WINDHOEK, May 12 2009 (IPS) - Daisy Duck is the first to greet visitors to the Soweto Islamic Centre, from a television in the lounge of this former pre-primary school in Katutura, Windhoek’s oldest township. Beyond a kitchen is a humble, light-filled prayer room, the ground covered with carpets. 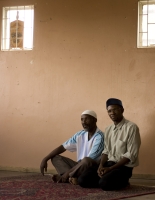 A blackboard is mounted on one wall and one of the windows is broken. "Home Sweet Home" embroidered covers are placed on each seat of the lounge suite, the bookshelf in the corner is filled with Arabic, German and English titles.

"The Soweto Islamic Centre was established in 1986," explains Sheikh Abubakr Tjipanga, who has lived and worked at the centre for two years. About 60 Muslims, of which 10 are women, belong to this small mosque, which like most others in Namibia, is referred to as a centre.

Namibia is a predominantly Christian country with 10 percent of its 2.1 million citizens embracing indigenous beliefs. Sheikh Abubakr, who reverted* in 1996, is one of a small but growing number of Namibian Muslims.

There are no authoritative figures or studies on Islam in Namibia but the sheikhs and imams interviewed estimated the numbers of Muslims living in Namibia today to range between 3,000 and 5,000, drawn from various ethnic groups, including Ovambo – the largest group in Namibia – Damara and Nama.

There are currently 12 mosques in Namibia – six in the capital city, one in Walvis Bay, two in Katima Mullilo in the Caprivi, and three in the populous north, including Oshikango, the main town on the border with Angola. About 50 Namibians have gone on Hajj and 11 are currently studying in Saudi Arabia, according to Sheikh Abubakr, who himself spent seven years there studying Arabic language and shariah law.

Sheikh Abubakr has strong links across the Muslim world and particularly to SANZAF (South African National Zakáh Fund), which pays his salary.

"My uncles reverted in the 60s and they gave me books to read on Islam, including by Sheikh Ahmed Deedat," he says.

"My day to day work mainly revolves around counselling teenagers, talking about HIV/Aids and drugs, marriage counselling and other issues affecting this community like (finding) work and food."

Saïd (Petrus) Tjipeba is one of those whose lives the Sheickh has transformed. "I come from !Hoachalnas, a small village in the south and embraced Islam while still at school a year ago," he said. "I met Sheikh Abubakr and he gave me advice. There was a lot of questioning from people around me, asking me why I reverted."

"Before I became a Muslim I was an alcoholic. I saw these brothers who stay here (at the mosque) and they inspired me," Tjipeba said. Although he admitted that it was not an easy choice to defend to his peers and non-Muslim friends, he said that he felt home at the centre and that Islam was the right path for him to follow.

Ikraam Gurirab, a Damara who embraced Islam in the early 1990s, is one of Soweto Centre’s senior members.

"It was more than my spiritual liberation. I used to smoke dagga (marijuana) and I was a heavy drinker. I’m married now. My family supports me – I’m a changed man. Some people told me Islam is not for Damara or Nama. They don’t know the truth of Islam," he said.

HIV/AIDS infection rates are high in Namibia, alcohol and drug abuse are widespread. Reverting to Islam means becoming part of a small, tight-knit and supportive community, which according to the Sheikh, leads to social mobility.

While the impact of Islam on individuals, especially young Namibians in challenging socio-economic situations, is significant, politically speaking the community is too small to make its voice heard yet.

Sheikh Abubakr lectures at the University of Namibia and has recently been invited to discuss social issues on Nama/Damara Radio.

"Things have changed since 9/11. There is a greater understanding, we’re invited by embassies as well as by Christian pastors," he said.

Around 500 Muslims, including both Namibians and foreign nationals, attend Friday prayer at the Windhoek Islamic Centre (WIC) on Sam Nujoma Avenue. Sheikh Shafi Abdulaziz, originally from Kenya, has been at the WIC for nine years. "My role is to propagate Islam and this is the mother body of Islam in Namibia, it’s the Islamic U.N. Headquarters so to speak."

The charismatic Sheikh estimates that there were around 1,500 Muslims in Namibia 10 years ago. "Initially young men reverted to Islam, drawn by a clear message and the Islamic moral system, regarding alcohol, drugs, adultery," he said.

Women have often been brought to Islam through their husbands, Abdulaziz said, but underlined that reverting was a free choice and religion was not to be forced upon anybody. The worshippers at the WIC presently includes 200 women.

"I grew up in a Christian home in the north, but I had this feeling in my mind that I have to embrace Islam six months ago," said Shaheeda (Rauna) Hangula.

Shaheeda, who still introduces herself as Rauna, runs a braai (barbecue) stand in Dorado Valley and laughingly admits that she is still finding it difficult, learning to pray in Arabic and to dress as a Muslim woman, covering her arms or head. Working at her stand, she wore an apron over a short-sleeved top and jeans and no scarf.

While she had met someone who told her about Islam she said the choice was hers alone to revert. "It’s a good religion, with good rules," she said. While some of her friends and family members were happy about her choice, some are still suspicious.

Besides a mosque, the Centre also has a library and a social welfare office. An educational centre supports students from primary school level up to university education. The centre tries to obtain local government or foreign bursaries for deserving students, as well as sending students abroad to study. Not all study in Muslim countries and not all study Islam.

"We need doctors and engineers and more to develop. Islam is not just a religion, it’s a spiritual and private endeavour that touches all aspects of life," Sheikh Shafi underlined.

"Terrorism has damaged Islam," Sheikh Shafi replied when asked about Islam and the global political climate. "Where is the truth? Where is justice?"

"We have been involved in various dialogues with embassies, notably the Americans and government. We have also invited governors and councillors to find out what the contributions of Muslims can be and engaged in interfaith debates on the radio or TV," Sheikh Shafi said.

He is looking forward to attending an interfaith religious dialogue in the U.S. in May, paid for by the U.S. State Department.

Finding its place in Namibian society

It attracts about 40 to 50 people for prayers while others knock at the Imam’s office door for advice. Imam Davoud Jafari left Iran in early 2009 to become the third Imam of Quba mosque in Klein Windhoek. "There are Sunnis coming here too. We are so few Shia here. These differences between Muslims don’t matter here," he said.

"We’re a minority here. We don’t get involved in politics and we follow and respect society, There are a few Arabs and some African Muslims here, but we are the minority. There are sometimes problems with our dress code. Some people are surprised but there is no hostility," Imam Davoud said.

Unimaginable in the Islamic Republic of Iran, Quba mosque and the Embassy Liquor Store across the road as well as the WIC situated next to Windhoek West Bottle Store, coexist peacefully and don’t interfere in each others’ business.

Yahya (John) Kakonda, who grew up in the north of the country, works for the Ministry of Safety and Security wore a suit. "Namibia is a secular state. I had some problems some years ago at work as I brought my prayer mat and sandals and used to do salah (prayer) during lunchtime. I received a warning. It wasn’t taken further after I explained myself and so I carried on."

"My friends, thinking that something must be wrong with me, initially disagreed but eventually accepted my choice," said Kakonda, who reverted 14 years ago.

The Muslim community is seeking a greater public profile. Imam Davoud and Sheikh Shafi are working on expanding or establishing a web presence.

"We want our own radio station here," Gurirab, on the other end of town revealed. "We’ve been seeking to have one hour (of airtime) a month. Maybe, Insha’Allah, the almighty will help us (get a radio station) and half of Namibia will be Muslim."

*Muslims believe that all human beings are born pure and by embracing Islam, one returns to the original and sinless state in which God created him or her.