NOVA RUSSAS, Brazil, Jul 22 2009 (IPS) - The rain – usually much desired because it is so scarce – has come in excess this year, destroying many crops. But in this farming district in far north-eastern Brazil, the impact of the heavy rainfall was less marked than in the past, thanks to the diversification of crops and productive activities. 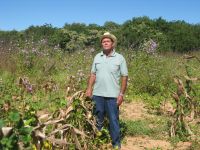 Francisco Soares Oliveira in his field. His maize and bean crops were lost to this year's unusual floods. Credit: Mario Osava/IPS

“It rained much more than what our soil needs,” said Francisco Soares Oliveira, 63. His village of Irapuá in Nova Russas, a municipality of 30,000 people in the northeastern Brazilian state of Ceará, is home to 89 families.

The Northeast, Brazil’s most impoverished region, is semi-arid, with a landscape of twisted bushes and withered grasses, the result of cyclical drought.

And although Irapuá normally stands out for its greenery and large trees, thanks to a stream that runs through the village, the vegetation is now unusually lush due to this year’s heavy rains.

The municipality where it is located, Nova Russas, forms part of an area known as Inhamuns, which is actually drier than other parts of the Northeast.

The PDHC, financed by the International Fund for Agricultural Development (IFAD) and the Ministry of Agrarian Development, operates in six north-eastern states, promoting family farming, rural leadership and the coordination of various institutions to help people adapt better to the semi-arid climate.

In Inhamuns, one of seven rural development areas in Ceará, Oliveira said that 71 percent of the 1,376 families supported by the PDHC already have tanks for collecting rainwater, which is used for drinking and cooking. Progress is also being made in other ways to collect and store water for irrigating local fields.

Francisco Oliveira (no relation to Ana Paula) is one of the 25 small farmers in Irapuá who this year joined an effort to grow “partner” cotton, meaning it is combined with other traditional crops, like beans and maize. Cotton was the least harmed by the floods and made up for some of the other losses.

Another plus has been organic production, which does not use chemical pesticides or fertilisers, allowing the cotton to be sold at twice the price of conventional cotton, noted Oliveira. Furthermore, the community joined a network to create added value.

Others, like Deusdete de Carvalho, 70, former president and current treasurer of the Irapuá Association of Family Farmers, are raising bees, in addition to livestock and crops.

“There are now nine families producing honey, and there were just two when the project began” in 2006, a time when “we didn’t have equipment and had to pay for services from people from the outside who kept half of what we produced,” recalled Carvalho, who hopes to sell 500 litres of honey this year.

The group processes and packages the honey. Most is sold to the government agency that provides food for public school meals.

The beekeeper’s wife, Maria do Socorro Carvalho, also takes care of 50 hens, producing about 200 eggs per month. “Before, we didn’t have a henhouse. They lived outdoors and we lost a lot of eggs to other animals,” Carvalho said.

“The project improved our lives,” she said. Technical assistance taught them about poultry and livestock management, and diversification with sheep, dairy cows, honey and crafts, all of which prevented “a disaster this year,” she said.

There is a group of 16 women who produce hand-made items, mostly clothing and knit articles. But there would be many more women in the group if some of the local men didn’t prohibit their wives from participating, complained Aurilane Carvalho.

“Many have left craftwork” because of sexist “violence,” she said, and because they have to take care of children and household duties.

But participation in the project – with technical assistance from PDHC and other organisations like the Catholic Church’s Caritas – “has reduced alcoholism” that contributes to domestic violence, and also the exodus of youth, Carvalho said.

The tall 27-year-old demonstrated her leadership abilities when she spoke in public on Jun. 21, during a visit by IFAD president Kanayo Nwanze to her village.

Keeping young people in the community is “a challenge,” she admitted. “Many leave for Rio de Janeiro.” What is taught in school has little connection with “the reality of the countryside,” parents don’t want their children to follow in their footsteps as farmers, “suffering the same difficulties,” and there is a lack of cultural and recreational activities, she said.

But Nwanze, a Nigerian with a doctorate in agricultural entomology and with 30 years of experience in rural development, said at the conclusion of his visit: “I learned more here than in books” about family farming, a sector that feds more than 80 percent of the global population.

Product diversification creates “an active rural community” and a local economy, two elements that are “the beginning of the solution to many problems,” like national food security, the rural exodus that creates problems in the cities and emigration, the IFAD official said.

IFAD, a United Nations agency created to fight rural poverty in developing countries, has already financed six projects in Brazil for a total of around 142 million dollars, primarily in the Northeast, where another 46 million dollars have been earmarked for two new initiatives.

“Harmony with nature” is another crucial dimension for rural development, Nwanze added.

Tractors are no longer used for ploughing in Irapuá, said Francisco Oliveira, who was born and raised here and has 50 hectares. “The tractor depletes the soil,” he said. Using direct planting techniques, that is, without removing field stubble, helps the soil maintain moisture and nutrients, he explained.

“The project has opened many doors for us,” including making it easier to obtain credit, he said.

Irapuá “is a synthesis of a good part of what we do,” said PDHC director Espedito Rufino: bolstering community leadership, participatory management and associations to expand resources.

But development requires “ongoing public policies, not just projects” for the poor, he said.

PDHC and other local organisations have accumulated experiences that can “guide policies for development” in the Northeast, but the authorities and the private sector have to understand “the specific social, economic and environmental realities of the semi-arid region and the culture of its people,” he stressed.

The presence of IFAD provides a path for “international repercussions” of the local actions and is a boon to poor farmers, “who are excluded from public policies” and whose role in culture, food production and preservation of natural resources is ignored.

IFAD also promotes cooperation for Brazil to share knowledge with the world, and to learn from experiences in other regions. This transfer of “technologies involving products and processes” is important with Africa, but it’s better to talk about “swaps” and “participatory generation of knowledge,” Rufino concluded.