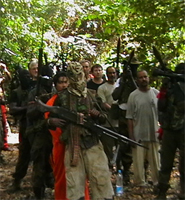 Niger Delta militants with hostages in 2006: a campaign of kidnapping and attacks on oil installation has crippled Nigeria's oil exports. Credit: Gretchen Wilson/IRIN

Under a government initiative which started on Aug, 6, militants in the region have 60 days to hand over their arms in return for a presidential amnesty, unconditional pardon and reintegration programme.

As the first week of the amnesty period draws to a close, only a few weapons have been handed over at designated screening centres.

"The arms are only being delivered to the screening centres in trickles," says Patrick Naagbanton, an activist who monitors the inflow of small arms into the Niger Delta. "The quantity of arms being turned in does not reflect the high number of arms in the Niger Delta."

That few weapons have so far been turned in is not a surprise, given that many militant groups in the region, including the most notorious, the Movement for the Emancipation of the Niger Delta (MEND) have made clear that they do not intend to disarm under the amnesty programme.

In an email interview with IPS, MEND spokesman Jomo Gbomo, said that the group has no faith in the amnesty program. "Our position remains the same. We do not identify with an amnesty that does not give room for dialogue and fails to address the root issues that gave birth to the struggle," he says.

MEND says the disarmament program fails to address the root causes of its struggle, which Gbom says is aimed at reversing unjust treatment of local communities after more than five decades of oil exploitation.

Nigeria is one of the world’s largest oil producers. All the oil comes from the Niger Delta region. While oil profits are shared between the Nigerian government and multinational oil companies operating in the region, local communities remain impoverished, and bear the pain of environmental pollution caused by the oil industry.

MEND wants issues like these to be resolved first before militants can agree to disarmament.

Dr. Timiebi Koripamo-Agary, a member of the Presidential Amnesty Implementation Committee, says disarmament is only a first step towards bringing much-needed development to the Niger Delta.

"While the amnesty is part of a holistic program of building peace, delivering social services, providing basic infrastructure and sustainable development in the Niger Delta, it does not require the resolution of all issues in the region or the country before it can take effect."

Koripamo-Agary says there can be no development without peace.

Tony Iyare, editor in chief of the Lagos-based Gleaner News Online and an analyst on Niger Delta issues, , agrees that there is a need to address the insecurity in the Niger Delta. "The disarmament should be viewed in the context of making the Niger Delta secure. The high number of arms has made the place a hot bed and the possibility of a blow out is imminent."

In the course of their struggle, the militants have kidnapped hundreds of people and carried out attacks on numerous oil installations. A report published by the Niger Delta Technical Committee – a 45-person body established by the Nigerian government to seek a solution to the Delta crisis – shows that in 2008 alone, 300 hostages were taken; about 1,000 people are estimated to have been killed in violence related to the Delta militants.

Insurgency hits where it hurts

The insecurity in the Niger Delta has adversely affected oil flow. Before MEND started its activities in 2006, Nigeria was exporting 2.5 million barrels of crude oil per day. But as of July this year, militant attacks on oil installations had brought Nigeria’s oil output down to less than half that.

Such a drastic drop in oil output has a major impact on a country which relies on oil sales for more than 90 percent of its export earnings.

Under the terms of the amnesty announced by President Yar’Adua, militants can escape prosecution for crimes committed in the course of crippling Nigeria’s oil industry.

"I hereby grant amnesty and unconditional pardon to all persons who have directly or indirectly participated in the commission of offences associated with militant activities in the Niger Delta," the president announced on Jun. 24.

To qualify for amnesty, Koripamo-Agary says, militants are expected to go "to the nearest screening centre, turn in their arms, register, take the oath of renunciation (of armed violence) and receive the Presidential Amnesty and unconditional pardon."

Militants will also be required to register for a rehabilitation and reintegration program. About $63 million has been budgeted for these.

Despite the slow start, the Nigerian government projects that more than 10,000 militants will seek amnesty under the disarmament programme.

"MEND does not believe the current amnesty offer is directed at freedom fighters because there is no room for any form of dialogue," says Gbomo. "The proclamation of amnesty seems to be directed at criminals such as armed robbers, rapists, kidnappers seeking for ransom."

One of the movement’s key leaders, Victor Ben Ebikabowei – the head of MEND in Bayelsa State, popularly known as General Boyloaf – has agreed to disarm. But Naagbanton says Boyloaf’s action should be viewed with caution because it is doubtful if he can carry the entire MEND along.

"There are several militant leaders in the Niger Delta, there are so many of them that you have never heard about, it will take all of them to disarm before you can bring peace to the region," Naagbanton told IPS.

The Nigerian government however remains optimistic that the disarmament program will enable a return to previous levels of oil exports. A true picture will only emerge in October when the programme ends.