RIGHTS-CHAGOS: ‘My Navel is Buried There’

PORT-LOUIS, Nov 21 2009 (IPS) - “We lived like fishes in the water. We were not lazy. We worked hard. We lived a very natural way of life by eating fish and green vegetables and fruits that was abundant in the forests. Nature was our refrigerator.” 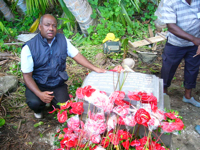 In 2006, a hundred Chagossians were allowed to go and have a look at their land. They came back in tears. Credit: Chagos Refugee Group

Rita Bancoult lived on Peros Banhos, one of the islands forming the Chagos archipelago 1,000 kilometres north of Mauritius. This small set of islets were considered part of Mauritius until they were detached from its territory just prior to independence from British colonial rule in 1968.

One of the islands, Diego Garcia, was ceded by colonial ruler, Britain, to the United States and transformed into a military base.

The people of the Chagos – 2,500-strong at the time of their exile in the 1970s, and today numbering 8,600 – was forcefully displaced and brought to Mauritius. Others were sent to the Seychelles.

“My navel is buried there,” 74-year-old Bancoult says of her lost homeland.

“The small hospital that was built there opened only when a woman had to give birth because Chagossians fell rarely ill,” she recalls.

Sixty five year-old Aurélie Talate remembers the fresh fish and vegetables she ate. “We did not know about frozen food nor money,” she told IPS.

Thrown into the rough suburbs of the Mauritian capital Port-Louis, the Chagossians – particularly the women – battled to be allowed to return home, immediately after their arrival, causing days and weeks of disturbances in the capital.

This went on for several years. Some were beaten by the riot police, arrested and imprisoned but they never stopped claiming their land. Instead of a return, they received some financial compensation from Britain and land from Mauritius on which to start a new life.

Forty years later, they still live in poverty. Many of them are jobless and they become easy prey to drugs and prostitution.

Olivier Bancoult was four when he was brought to Mauritius together with his mother, Rita. He created the Chagos Refugees Group in 1983 to defend the rights of his community.

“Instead of living in poverty here, let us go back to our land,” he says.

Talate will be the first one to do so if the British allows her. “I’ll go even if I have to walk on my hands”, she says, arguing that life is no paradise for Chagossians in Mauritius.

The Chagos Refugee Group has been struggling for two decades to regain its homeland, staging numerous public demonstrations and hunger strikes in Port-Louis, and petitioning the British government and international organisations.

Three times the community won their cases in UK courts, most recently in 2007. But in a split judgment in October 2008, the House of Lords, the final Court of Appeal in the United Kingdom, ruled in favour of the British Government, finally blocking this route home for the displaced people.

The Chagossians have appealed to the European Court for Human Rights, and Bancoult is not discouraged.

“Even if many of our elders have died, the youth wants to go and see the land of their forefathers,” he told IPS.

U.S. anthropologist and professor David Vine has published a book called “Island of Shame” which relates how the Chagossians lived before their exile, how the U.S. and UK governments conspired against these people, and how they are today suffering from poverty and sadness in Mauritius.

Vine says he is ashamed about what his government did to the Chagossian people. He has sent a copy of his book to US President Obama in the hope that he’ll help Chagossians return back to their homeland.

But the key to the Chagos resides with the British government, which placed the archipelago under the rule of the BIOT (British Indian Ocean Territory).

Gillian Merron, Under-Secretary for Foreign and Commonwealth Affairs told the UK Parliament in April that “we deeply regret the forced resettlement of Chagossians and the hardship that resulted from it.”

She added: “We do not seek to justify those actions and do not seek to excuse the conduct of an earlier generation. However, the truth is that we have to look forward. We cannot turn the clock back.”

Mauritius is mainly concerned by its sovereignty over the Chagos. For years, it has been claiming it at the level of the United Nations. The island is now seeking an amicable settlement of this long-standing dispute with the UK through discussions that have started early this year.

In 2006, a hundred Chagossians were allowed to go and have a look at their land. They came back in tears.

“Our houses lie still there; we have found many of our tools lying around. But most distressing is that our cemetery where our grand parents are buried is in a pitiful state,” Bancoult told IPS.

But Fernand Mandarin, leader of the Comité Social Chagossien, another group that was formed later, is sceptical. “I do not think all Chagossians would be happy to go back,” he observes, claiming that the younger generation, though poor, is used to modern living in Mauritius.

“They would go and settle down in Britain if they can, as some of our friends have done with the British passports they secured in 2001. But not in the Chagos.”

But Bancoult says the community can cohabit with the U.S. military base where some 12,000 people live “until the archipelago is freed.”

His plan, submitted to the British government in 2007, envisions that plenty of jobs can be created for the community in a fishing industry to be set up there. The archipelago is reputed to have lots of fish in its lagoon.

“About 25 foreign fishing companies are presently engaged in this activity around the Chagos. Britain is getting 1.7 million pounds annually from them as fishing licences. Why can’t it use this money to set up an industry?” Bancoult asks.