SANTIAGO, Jan 23 2010 (IPS) - In its proposed constitutional reform, the Chilean government recognises that the availability of freshwater is a matter of national security. Environmentalists applaud the initiative, but some business groups are worried it will hurt their bottom line. 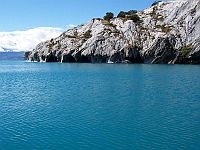 The paragraph that will be added to Article 19 of Chile’s Constitution, if Parliament approves the bill sent by President Michelle Bachelet on Jan. 7, states that water is a national good for public use, regardless of the state where it is located or the course it follows, including glaciers.

The bill “opens a first step for resolving the crisis of access, contamination, concentration and overexploitation of water in Chile, and the degradation of watersheds,” declared a group of environmental organisations and workers from private sanitation companies.

The initiative made it over the first hurdle Jan. 13 when it was approved by the Chamber of Deputies agricultural committee.

The legal text recognises that freshwater, which is lacking in the Chilean north and abundant in the south, has become a “scarce good” and that its availability is “a matter of national security,” much more than fossil fuels, which can be imported from other countries.

Around the globe, this vital resource is threatened by the effects of climate change, which is causing glaciers to melt as well as more intense droughts.

Chile is a world leader when it comes to freshwater reserves in the form of glaciers. According to the latest inventory by the government’s water agency, there are more than 3,500 glaciers, covering some 20,000 square kilometres.

According to the text, the constitutional reform aims to provide the authorities with the necessary tools so that, “in case it becomes indispensible,” they can limit or restrict the exercise of private rights over water and reserve surface or underground waters to ensure availability, primarily for human consumption.

As such, Chile is following the path of Ecuador and Uruguay, which constitutionally defined water as a public good in 2008 and 2004, respectively.

However, several business associations, like the National Society of Agriculture (SNA) and the Mining Council, immediately expressed concerns about the bill.

The SNA says the constitutional amendment will mean expropriation without compensation for farmers and investors. Society president Luis Mayor said that in Chile there is not a water shortage but a problem of distribution that could be resolved with minor adjustments, which is why his group opposes the reform.

Sara Larraín, director of the non-governmental Sustainable Chile Programme, says the farmers’ fears are unjustified because the bill clearly establishes that they will maintain “in its integrity the power that the current title-holders have over their respective rights for water use.”

Once the bill is approved, a law must be drawn up to regulate the make-up, recognition, exercise and possible termination of the water rights currently recognised of the private individuals.

“Our expectation is that before this government ends its term (Mar. 11) the constitutional change will have been made,” said Larraín in response to a Tierramérica consultation, considering that the authorities have said it is urgent, meaning that the bill must be presented and debated by both houses of Parliament within 10 days.

In March, the Sustainable Chile Programme will publish a book about water conflicts in this country. So far, the group has identified hundreds of disputes between communities and mining, hydroelectric, forestry and agro-industrial companies.

Currently, freshwater is recognised as a national good for public use only legally, not constitutionally. In contrast, the Constitution does give the government control over the nation’s vast mining resources.

In 1981, “with the implementation of a new Water Code, an imbalance resulted between the common good and the interests of a few individuals, an imbalance that must be corrected,” states the government in its proposal.

The executive branch recognises that the code led to a disproportionate concentration of water use rights for hydroelectric power, and, according to the Free Competition Defence Tribunal, 90 percent of such resource rights are concentrated among just three companies.

“We have always thought of water as a common good that should belong to all Chileans,” Ana María Miranda told Tierramérica. She is the secretary-general of the National Sanitation Workers Federation, whose members say they themselves are living a contradiction for working in this privatised sector.

On the one hand, they applaud the fact that water and sewage services in urban areas reached 99.8 percent and 95.3 percent, respectively, in 2008. On the other, they are concerned that this was achieved through high fees to users and profits for the companies.

“When we go to other countries to talk about our reality, they see us as privatisers, but our fight today is to recover water resources (as a public good), and then to return the companies to the government so that the users pay a fair price and the profits are reinvested in Chile. Perhaps that process is going to be longer,” Miranda said.

Teresa Sarmiento, president of the Association of Rural Potable Water Committees for the Santiago metropolitan area, told Tierramérica that “the nation’s first priority should be for human consumption.” The association brings together many cooperatives that obtain water through agreements with the Ministry of Public Works.

Sarmiento is pleased with the constitutional reform because it could resolve a series of administrative problems that originated with the 1981 Water Code, and which, she says, are preventing the improvement and expansion of the water systems.

Bernardo Zentilli, president of the non-governmental National Committee for the Defence of Flora and Fauna, believes a greater commitment from the community is needed in order to promote such initiatives that seek to protect the environment and improve people’s quality of life.

“The responsibility lies with each one of us, as citizens. Most Chileans aren’t aware of their rights, even at the municipal level, and less at the regional or national level,” he told Tierramérica.