MALAWI: Love That Dares To Speak Its Name 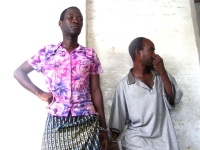 A traditional engagement in Malawi counts as a civil marriage and is recognised as such throughout the country. Chimbalanga and Monjeza are the first gay couple to declare their sexual orientation in this manner. The couple is facing charges of “gross indecency” and buggery for “having carnal knowledge against the order of nature”, offences under Malawi’s colonial-era penal code.

Amnesty International criticised the arrest and called for the immediate and unconditional release of the couple from police custody. Amnesty accuses Malawi of criminalising homosexuality, gender identity and the couple’s legitimate exercise of their rights.

The international human rights body says that by arresting the lovers, the country is failing to respect international treaties it has ratified, such as the International Covenant on Civil and Political Rights and the African Charter on Human and People’s Rights. Local activists are challenging the government’s action as against its constitution.

But Malawi government officials, including the solicitor general’s office, have refused to respond to the condemnations or comment on the matter, saying that it will be sorted out by the courts.

The state has administered several medical tests on the couple to establish that they were having sexual intercourse as well as a mental examination to test if each is mentally stable. These tests have since been described as demeaning by the human rights organisations.

Neither Chimbalanga and Monjeza seem to have been fully aware of the laws on homosexuality; Chimbalanga has been working as a domestic servant for the past five years, most recently employed as a waiter at a lodge; while Monjeza is a subsistence farmer.

They told local media after their arrest that they were motivated to come out in the open about their relationship by love. However, many people in the country are arguing that the two are being used by unspecified “rich people” as a test case on gay rights.

Trial a test in more ways than one

The trial has become something of a circus in Malawi. The public has not been kind to Chimbalanga and Monjeza, taunting the couple is at every court appearance.

Chimbalanga does not seem to be moved by the jeers as he walks around the court corridors in feminine clothes, usually a flowery blouse and a wrapper. Monjeza, by contrast, has seemed uncomfortable and reserved.

Neither man enjoys the support of his family. Monjeza’s aunt, Zione, accuses her nephew of bringing “disrepute and shame” to his family by marrying a man.

“People no longer respect our family. They regard our family as irresponsible and disorganised. This is a big scandal. We are very embarrassed,” she says.

Chimbalanga’s uncle, a chief in the southern district of Thyolo, also says he is unhappy with his nephew’s behaviour.

“Tiwonge was born a man but he has always shocked us with his feminine behaviour. He walks, talks and dresses like a woman. This has always been embarrassing to us and people have been accusing us of having bewitched him,” says Village Headman Chimbalanga.

Chimbalanga was banished from his village seven years ago, according to his uncle: he would have been just 13 at the time.

Their families did not attend the engagement ceremony, held outdoors in the garden of the lodge where Chimbalanga works in Blantyre, Malawi’s commercial capital. But hundreds of curious people turned up to witness the union.

“They wore traditional outfits made out of the same material and Chimbalanga was dressed as a woman. The ceremony was colourful but a power black-out messed up the music system; a thing that made Chimbalanga weep,” Natasha Golosi, who attended the ceremony told IPS.

Golosi said people were jostling each other to take a closer look at the couple as the ceremony was taking place. “It was like any other traditional engagement ceremony. They exchanged rings as well,” she said.

According to the Centre for Development of People (CEDEP), a local human rights organisation which looks after the welfare of marginalised groups, most homosexuals in Malawi are forced to hide their sexual orientation for fear of prohibitive and outdated laws that remain in force.

“It is not criminal to express your sexual orientation,” CEDEP director Gift Trapense told IPS. “And the laws being used are from the Penal Code which is against the human rights that are enshrined in the Constitution. This is a gross human rights abuse against a group of people.”

Chimbalanga and Monjeza have been arrested based on Sections 153 and 156 of the Penal Code which criminalise homosexuality and recommend that anyone convicted under these sections may be jailed for a minimum of five years and maximum of 14 years.

Human rights lawyer Chrispine Sibande says the arrest and prosecution of the gay couple is inconsistent with Article 20 of the Constitution which states that “discrimination of persons in any form is prohibited and all persons are, under any law, guaranteed equal and effective protection against discrimination on grounds of race, colour, sex, language, religion, political or other opinion, nationality, ethnic or social origin, disability, property, birth or other status”.

Sibande argues that the Constitution is the supreme law of the land and guarantees freedom of conscience, privacy and expression which includes sexual orientation; the constitution’s Article 5 states that where a law is inconsistent with the provisions of the Constitution, it is invalid.

“The gay suspects did not do anything wrong as long as they lived the without violating other people’s rights,” says Sibande.

The trial has been adjourned to Jan. 25 because Chimbalanga has been afflicted by malaria.

During a Jan. 14 court appearance, he was unable to stand upright and was seen lying on the court floor and vomiting. Far from attracting sympathy, spectators jeered that Aunt Tiwo, as Chimbalanga is now popularly known, is pregnant.

The lawyers representing Chimbalanga and Monjeza are asking the Constitutional Court to take a position on the matter. But Blantyre chief resident magistrate Nyakwawa Usiwausiwa has indicated that his court will continue hearing the matter while awaiting a decision on the constitutional position.