BOGOTÁ, Feb 4 2010 (IPS) - A leading international rights group urged the Colombian government to take action against what it called the “successors” to the far-right paramilitary militias, which continue attacking civilians and human rights defenders. 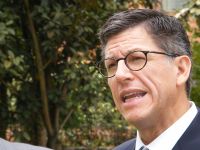 In its new report, “Paramilitaries’ Heirs: The New Face of Violence in Colombia”, Human Rights Watch (HRW) says the 2003-2006 demobilisation of the “brutal, mafia-like, paramilitary coalition known as the AUC (United Self-Defense Forces of Colombia)” was a failure, despite repeated government claims that the paramilitaries no longer exist.

The 122-page report, the result of two years of fieldwork, says that after the demobilisation process had come to an end, new groups almost immediately “cropped up all over the country, taking the reins of the criminal operations that the AUC leadership previously ran.”

“The emergence of the successor groups was predictable, in large part due to the Colombian government’s failure to dismantle the AUC’s criminal networks and financial and political support structures during the demobilisations,” adds the report, which was released in Bogotá Wednesday.

“The successor groups are engaged in widespread and serious abuses against civilians in much of the country. They massacre, kill, rape, torture, and forcibly ‘disappear’ persons who do not follow their orders. They regularly use threats and extortion against members of the communities where they operate, as a way to exert control over local populations,” it says.

The appearance of the successor groups has also likely contributed to a significant rise in the number of internally displaced persons nationwide since 2004, HRW says. According to official figures, the number of people forced to flee their land dropped to less than 229,000 in 2004, before increasing each year to a total of 327,600 in 2007.

The groups “are quietly having a dramatic effect on the human rights and humanitarian situation in Colombia,” says the report, which adds that they often target human rights defenders, trade unionists, displaced persons, victims of the paramilitaries who are seeking justice, journalists, and community members who do not follow their orders.

HRW Americas director José Miguel Vivanco said “death threats against labour leaders and other social activists from these groups have increased drastically. Threats are very effective and sadly allow (the groups) to control the population under their influence.”

AUC, which emerged in the 1980s and was heavily involved in the drug trade, according to its own leaders, was blamed by United Nations human rights officials for 80 percent of the atrocities committed in Colombia’s four-decade civil war.

They also worked in close cooperation with the military, as documented by U.N. officials, the Inter-American Court of Human Rights, the U.S. State Department, and prominent international rights watchdogs like HRW and Amnesty International.

To eliminate evidence of the thousands of murders they committed every year, the paramilitaries sometimes built ovens to burn the bodies. Another frequent practice, to avoid the effort of digging graves, was the use of chainsaws to cut up victims – dead or alive. Rivers were also extensively used, to get rid of entire corpses or dismembered bodies.

Most of the successor groups inherited the AUC’s modus operandi: forging alliances with government forces to gain territorial control and fight the leftwing guerrillas.

But there is no consensus on what term to use to refer to these new or reassembled groups, nor on how many there are.

Since the rightwing government of Álvaro Uribe officially declared in early 2007 that paramilitary groups no longer existed, the police have referred to them as “criminal bands” or “bacrim” for short, estimating that they have a total of 4,000 members.

But the Armed Conflict Observatory of the Corporación Nuevo Arco Iris, a Bogotá think tank, believes the neo-paramilitaries number more than 10,000.

And former paramilitary chief Salvatore Mancuso, who was extradited to the United States on drug trafficking charges in May 2008, said in mid-2007 that there were 16,000 members of these new groups, and added that the best weapons were not turned over by the paramilitaries in the demobilisation process.

According to the police, the groups were operating in 24 of Colombia’s 32 departments (provinces) in mid-2009; there were at least nine groups with a certain level of regional influence and authority; and the majority of the leaders were former mid-level AUC commanders.

HRW says the government has not paid enough attention to the groups. Vivanco noted that the Attorney General’s Office has assigned just four prosecutors and 12 full-time investigators to the “bacrim”.

By contrast, he said, the Uribe administration spends a million dollars a year on lobbying in Washington to push for congressional approval of the free trade agreement (FTA) signed by the U.S. and Colombian governments.

“How many prosecutors could have been paid with those funds?” asked Vivanco, after clarifying that the HRW is not philosophically opposed to FTAs.

The FTA remains blocked in the U.S. Congress by Democrats who insist that the government must first demonstrate progress on human and labour rights in Colombia.

This South American country is also negotiating an FTA with the European Union, but a group of European Parliament legislators is pressing to include additional guarantees in order to improve implementation of core labour and human rights standards.

Catherine Ashton, EU High Representative for Foreign Affairs and Security and Vice President of the European Commission, informed the MEPs that the Commission had decided to take a break in the free trade negotiations with Colombia.

Emmanuel Raison, spokesman for the International Office for Human Rights – Action on Colombia (OIDHACO – a network of 35 European civil society organisations), reported from Brussels on Jan. 29 that in Ashton’s view, it was not appropriate for the new European Commission to already reach conclusions on such a delicate issue.

And in the face of the MEPs’ insistent demands, EU Commissioner-designate for Trade Karel de Gucht promised to take the time to open up an in-depth political debate on human rights in Colombia, Raison added.

HRW researcher Maria McFarland told IPS that the most important thing to understand from the new report is that “in this country there is an extremely serious problem with violence, abuses against civilians, committed by the paramilitary successor groups.”

“The human rights problems represented by the AUC were not resolved by means of a supposed demobilisation by the paramilitaries, and the abuses have continued, perhaps with new faces, new names,” she added.

The government “has failed to make this issue a priority. It has not tackled it with the seriousness it deserves,” said McFarland.

In the HRW’s view, “it is of utmost importance for the international community to address this problem, and to press the Colombian government for an effective response,” she said, adding that any mechanisms, such as FTAs, should be used to pressure the government to deal with the issue.

Reportedly, 37 paramilitary militias that presented themselves as belonging to the AUC demobilised in the negotiations with the Uribe administration.

The government reported that 32,000 members of paramilitary groups lay down their arms between 2003 and 2006, although at the start of the negotiations it estimated that the total number of paramilitaries was between 3,000 and 6,500.

Vivanco urged journalists to ask the government how many of those 32,000 who supposedly demobilised were actually paramilitaries, and said the administration does not have the answer because no one has ever investigated.

In 2004, the Consultancy on Human Rights and Displacement (CODHES) reported “the existence of a group of young men who were specifically recruited to take place in a demobilisation in the south of the country,” the president of the human rights group, Jorge Rojas, pointed out to IPS.

HRW verified that the practice of recruiting new paramilitaries in order to pad the numbers during the demobilisation process occurred in at least three regions.

No one knows exactly how inflated the numbers were, “but as a paramilitary told me, only 10 percent demobilised and only 10 percent actually complied. As to the rest, it was a huge failure,” said Rojas.