BEIJING, Apr 15 2010 (IPS) - Adept at navigating through politically sensitive anniversaries, the Chinese government has one more socially volatile date marked in its calendar: this year’s 30th anniversary of its one-child policy. 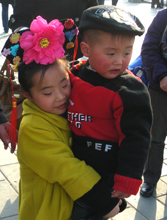 The backers of this policy set by the country’s communist leadership praise it as a unique experiment in social engineering, but detractors say it would ultimately undermine China’s rise as a global power.

While intent on avoiding soul-searching public debates over the anniversary, the government has found it difficult to stem the flow of embarrassing revelations that have been coming one after the other in recent months.

First, there was the news that when first initiated, the one-child policy was clearly intended just for a period of 30 years, mainly to cope with the population pressures created by the baby boomers of the 1960s.

In December, leading intellectual and academic Hu Angang said that an open letter by Communist Party leaders documents the duration of the policy for only 30 years – and speaks of its replacement with more suitable family planning rules in the period after.

Then, one of the architects of the one-child policy, Tian Xueyuan, spoke out publicly against the existing family planning rules. Writing in the Party’s flagship newspaper ‘The People’s Daily’ in December, Tian said it was time that China moved from a one-child to a two-child policy and allowed every couple – urban and rural – to have two children.

“China should keep up with the times and it is now when we consider the priorities for the next five-year plan (due to start in 2011) that is the right moment to adjust the policy,” he said.

The issuance of a public manifesto by one of the one-child policy’s own creators and its publication in ‘People’s Daily’ were interpreted by many here as a sign that the long-standing debate about the pros and cons of China’s draconian population controls has moved from academia to mainstream government circles.

Experts read even more in the appointment of vice premier Li Keqiang as the task leader for conducting China’s sixth population census, set to take place this year.

Li is the highest-ranking Party official to be given the far from easy assignment of recording the true numbers of the world’s largest nation, whose population is often put at 1.3 billion. The last population census in 2000 uncovered a minefield of sensitive population groups such as unregistered peasant girls and migrants who lived their whole lives outside the government registers.

“No matter what positive impact some scholars attribute to China’s family planning, the one-child policy is the main reason for the most serious population problems we are facing now – rapidly ageing population and severe gender imbalance,” said He Yafu, an independent demographer.

Chinese leaders credit the policy with preventing 400 million births, which its backers contend would have swollen the country’s population to unsustainable levels. At the same time, the once strict enforcement of the policy has slowly been eroding and replaced, often tacitly, with more lenient rules.

Big Chinese metropolises like Guangzhou, Shanghai and most recently Beijing are now allowing “double single” couples – or parents who are both singletons and products themselves of the one-child policy, to have two children.

This change has happened gradually and almost out of the public eye, spurred by alarmist projections of future negative population growth in wealthy hubs like Shanghai, where the fertility rate currently is 0.8 or far below the national average of 1.8.

Last year, China’s wealthiest province Guangdong quietly dropped the requirement that those “eligible-to-have-two-children couples” should wait for four years before having the second one. Beijing is set to follow suit this year.

“I could not wait for the government policies to change,” said Fan Xirong, a sport club manager in a Beijing hotel. Fan paid 300,000 renminbi (44,000 U.S. dollars) in fines and fees to register her second child, a girl, and make her eligible for education and health care.

“We could afford it and yes, our first one is a boy, but I’m getting older and I really wanted to have a baby girl,” she told IPS. “We don’t really worry about money in old age, but it will be so special to have a son and a daughter to rely on when we get old.”

During 30 years of enforced population controls, family planning officials may have succeeded through propaganda and coercion to change the traditional perception of having ‘more children, more happiness’. But a surge of wealth and fears about lonely old age are now prompting its resurrection.

Public fears of a greying China are now exemplified in a simple formula of 4-2-1, or the spectre of two single parents supporting four grandparents and one child. Family planning officials here estimate that by 2030, China’s population of people over 60 years of age will reach 355 million.

“In the last 30 years China’s economy has reaped the ‘bonus’ of population controls,” government demographer Tian Xueyuan told the ‘Southern Weekend’ newspaper in March. “But if we do not change the one-child policy now, the ageing of our society will transform this bonus into a ‘liability’.”

It was always meant to be a policy for 30 years anyway, economist Hu Angang said in the ‘Economic Observer’ in late December, citing a 1980 Communist Party document. No other government policy has been in place for more than 10 years, he argued.