TEHUACÁN, Mexico, May 20 2010 (IPS) - Supporters of amaranth have been trying for decades to bring this millennia-old grain back from oblivion. Known for its high nutritional content, it is now being promoted as a way to help modern-day Mexico confront two of its dietary ills: malnutrition and obesity. 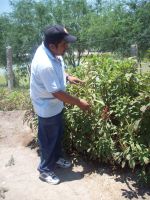 In 1980, philosopher Raúl Hernández and his wife Gisela Herrerías, an educator, took the unusual step of leaving Mexico City for the rural life of Tehuacán municipality, in the southern state of Puebla.

They found that the lack of water was a critical problem in Tehuacán. It took one more step for them to discover, in 1983, a simple solution in the amaranth plant.

The couple founded the non-governmental organisation Alternatives and Processes of Social Participation, which today is working in an area where three Mexican states converge – Puebla, Guerrero and Oaxaca – to conserve water resources and develop amaranth, a high-protein native grain.

“There was an initial agricultural investment to improve soil fertility, make compost and respect biodiversity,” Hernández, director general of Alternatives, told this reporter ahead of the International Day for Biological Diversity, which is celebrated May 22.

But eventually the initiative took off. Under the organisation’s supervision, the cooperative Quali has been working since 1994 to add value to certified organic amaranth grown on some 500 hectares by 1,100 farmers – indigenous Mixtecos, Popolocas and Nahuas in this semiarid region.

For this year, the pay will be 1.4 dollars per kilogram of amaranth, “more than the market price,” according to Hernández.

The grain is sold to the initiative’s industrial branch, which produces cereal, flour, sweets, biscuits and beverages. The factory, located in Tehuacán, began operating in 2009 with an investment of 2.3 million dollars. It processes about 100 tonnes of the grain per year.

“We had to put special emphasis on the care, the hygienic protection of the grain, to ensure that the product was safe,” said Hernández.

The foods are sold and consumed in Mexico, exported to Italy and Spain – and soon to Switzerland. The technology developed by Alternatives has won several awards, including the Slow Food prize for the Defence of Biodiversity, in 2002, and the National Agro-Food Prize, in 2008.

The amaranth plant belongs to the genus Amaranthus, which includes some 60 species. At least two of them, cruentus and hypochondriacus, are native to Mexico, and prized for their grain and their edible leaves, which are rich in iron.

The grain, cultivated 5,000 years ago by indigenous civilisations, contains twice the protein of maize or rice, and is rich in vitamins A, B, C, B1, B2, B3, folic acid, niacin, calcium, iron and phosphorous.

“It’s a protein of high biological value; one that is unique and extraordinary. It can be broadly cultivated, its processing is simple, and it has a very suitable nutritional composition,” said Abelardo Ávila, researcher for the government’s National Nutrition Institute.

The report “Underexploited Tropical Plants with Promising Economic Value,” published in 1975 by the U.S. National Academy of Sciences, included amaranth in a list of 36 tropical plants that were largely ignored but had great potential for development.

Throughout human history, many valuable foods have been left by the wayside. In the last century alone, crop diversity has declined 75 percent, according to the United Nations Food and Agriculture Organisation.

Amaranth, or “huautli” (in the Náhuatl language), came under fire from the Spanish Roman Catholic Conquistadores, who saw it as a pagan symbol. The plant eventually was forgotten in Mexico, where today it is common for its 107 million inhabitants to suffer from one the dietary extremes of either obesity or malnutrition.

Mexico heads the list of countries with infant obesity, and comes in second, after the United States, for adult obesity. But short stature resulting from chronic malnutrition was found in 889,400 women and in 714,900 men between the ages of 12 and 17 in the 2006 National Health and Nutrition Survey.

There are also 832,664 undernourished infants, according to the daily measure provided by the Mexican chapter of the Latin American Nutrition Society. And some 8,000 children die each year as a result of nutritional problems.

“With urban obesity and overeating… infant malnutrition has been reduced, but in the poor areas, the rate of decline is very slow,” said Ávila.

Research conducted in 2009 by his team found malnutrition in 80 percent of the girls and boys studied in the poorest municipalities in the southern states of Chiapas, Guerrero and Oaxaca.

The daily intake of 25 grams of amaranth over five months was able to reverse the nutrition problem, discovered Ávila and his researchers.

Resistant to drought, high temperatures and pests, the cereal is ready to harvest in six months. It is first germinated in seedbeds and then transplanted to a field, where it grows broad and abundant leaves, spikes of grain, and purple, orange or red flowers.

Puebla is the leading amaranth producer in Mexico, followed by Morelos and Tlaxcala states, and the federal district area of Mexico City. But it is grown on just 3,000 hectares. The average yield of 1.5 tonnes per hectare is much higher than that of beans (0.7 tonnes), according to the Ministry of Agriculture.

In the same areas as the amaranth initiative, Alternatives is working to renovate watersheds by bringing new life to age-old techniques: terraces, canals, dams and vegetation. But the organisation is not ignoring the benefits of new technology, and is introducing modern engineering and information technologies.

Although amaranth is a versatile ingredient in the kitchen, used as flour or cereal in sauces, desserts, tortillas or biscuits, “there is no productive system to turn it into an accessible food, when we should be producing millions of tonnes,” said Ávila. National government authorities are working on a promotion plan, like those that exist for maize and coffee, with government aid for the chain of production and sales.

“We are hearing more and more about amaranth. People are more aware of taking care of their diet and they know more about its nutritional properties,” said Alternatives director Hernández.

Now the government of Mexico City is urging the United Nations to declare amaranth heritage of humanity. Perhaps that way it will finally avoid oblivion.

*This story is part of a series of features on biodiversity by Inter Press Service, CGIAR/Biodiversity International, International Federation of Environmental Journalists, United Nations Environment Program/Convention on Biological Diversity – members of the Alliance of Communicators for Sustainable Development (www.complusalliance.org).