GUATEMALA CITY, Jun 21 2010 (IPS) - Rosenda Gómez, a 53-year-old mother of five, knows all about challenges. To overcome them, she started a modest sausage business in Guatemala, and thanks to her leadership skills and training and other support she received, she is now an example of the economic empowerment of women. 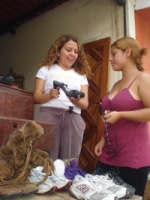 Sixteen years ago she began to make homemade sausages in her village, Laguna Ocubilá, to sell in the nearby city of Huehuetenango, the capital of the northwestern province of the same name.

But her business was a micro-enterprise that allowed her family to just barely scrape by — until things changed radically three years ago, when the Centros de Servicios para los Emprendimientos de las Mujeres (CSEM) came to her village.

CSEM, a network of centres providing technical and financial services for women entrepreneurs, is sponsored by the United Nations Development Fund for Women (UNIFEM) in association with Guatemalan institutions.

“We began to receive support, in the form of credit, training to improve our products, and promotion of our chicken and pork sausages in markets and fairs — none of which we had before,” Gómez told IPS.

With that boost, Gómez, who only went to school up to third grade, managed to increase production from five to 50 kgs of sausages a week, and demand continues to grow.

She also received support to set up a meat processing centre, along with other women backed by the CSEM, which changed the life of her family and her business.

Her three youngest children, between the ages of 13 and 15, still live with Gómez and her husband, a truck driver, while the other two have already given them seven grandchildren, she says proudly.

Her achievement is even more impressive given the limited economic independence of women in this impoverished Central American country. Men represent 65 percent of the economically active population, and women only 35 percent, according to the government’s national survey on employment and income.

Social organisations point to the vicious circle of poverty, lack of education and lack of health care suffered by so many in this country of 14.3 million people, where the poverty rate is slightly higher for women (51.5 percent) than for men (48.4 percent), according to the 2006 national survey on living conditions.

The CSEM is now supporting 3,273 women in seven services centres that began to be established in 2006 in the country’s poorest provinces. Seven others operate in El Salvador, Honduras and Nicaragua.

“We learned how to draw up a business plan, market our products and estimate production costs,” Sonia Paz, the head of the Asociación de Mujeres Olopenses women’s association in the eastern province of Chiquimula, where one of the CSEM centres operates, told IPS.

Paz forms part of a group of 36 women who make and sell handicrafts like bags and keychains using fibre from the maguey, or agave, plant.

“Thanks to support from the CSEM, we have improved the quality of our products and we have registered with the tax office,” said Paz.

“One of the vacuums that we have seen is women’s access to financing, which is why the programme is focused on a strategy of economic empowerment at the local, national and regional levels,” she explained.

At the local level, the CSEM centres work with economic development agencies and public and private lending institutions; at the national level they work with universities, the Economy Ministry, the Presidential Secretariat of Women, and women’s groups; and in Central America as a region they work with organisations and agencies that support women.

According to Cassisi, the CSEM’s beneficiaries “are at the base of the business pyramid; they are women who set up micro-enterprises and micro-businesses, which help move the economy.”

Like any effort, the CSEM has run into hurdles.

Gilda Rivera, head of the CSEM in the western province of San Marcos, told IPS a that although they opened their doors in April 2009, things are moving slowly. “The problem is that we don’t have funds to invest, and we have around 80 women waiting for our support,” she said.

In Rivera’s view, too many requisites are set for approval of projects in some cases, which slows down the process, while many women are waiting for training and loans in order to upgrade their businesses and increase production.

According to the third regional report on the labour market in Central America and the Dominican Republic produced by the International Labour Organisation (ILO) and the Central American Integration System (SICA), 73 percent of women in the labour force in Guatemala work in the informal economy.

The country’s high levels of gender violence and limited access to education and health, especially in rural areas, must be addressed in the attempt to combat gender inequalities and to provide equal opportunities and living conditions for girls and women, Alvarado said.