BUENOS AIRES, Sep 22 2010 (IPS) - Judges and other judicial officers in Argentina have begun to receive training on gender equality and women’s rights, as part of a broad programme that could serve as a model for similar initiatives in the rest of Latin America. 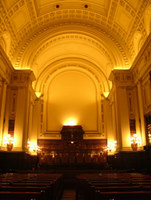 The plan, which was launched Tuesday, will train facilitators to raise awareness on gender questions and promote the incorporation of a gender perspective among judges, prosecutors, court officers and administrative employees of the justice system.

“We selected 100 people in the judiciary throughout the country to train them on gender issues, because we detected serious inequalities and problems,” Carmen Argibay, the first woman named to the country’s Supreme Court, told IPS.

The Supreme Court justice said they found instances of discriminatory treatment of women victims as well as trials and sentences that failed to take into account the disadvantages suffered by many women because they live in a “sexist, patriarchal system.”

As an example of a discriminatory sentence she cited a judge’s decision this year that forced a woman to obtain permission from her spouse to get her tubes tied.

But there are also judges who have begun to adopt a gender perspective, based on legal instruments that are available to everyone but have not yet been applied consistently and across-the-board.

For instance, in a ruling this year, six doctors were sentenced for refusing to provide chemotherapy to a 20-year-old woman with cancer because she was pregnant. Her request for a therapeutic abortion was also denied. The young woman died without receiving treatment, and the baby also died.

In, addition, there are judges who are in the vanguard on gender issues and set legal precedents with sentences that help promote specific laws to expand rights to marginalised groups.

One illustration of this phenomenon are the judges who ordered civil registry offices to register gay marriages. The sentences, which were upheld, were backed up this year by a law on same-sex marriage.

In 2004, Argibay became the first woman justice on the Supreme Court. She was joined that same year by Elena Highton, who is currently vice president of the seven-member Court.

Highton was behind the establishment in 2009 of the Supreme Court Women’s Office, which is tasked with training and research on gender issues, and of the Office on Domestic Violence, which provides attention around the clock every day of the year.

As part of the work of the Women’s Office, Argibay presented the start of a series of workshops this month to train gender facilitators within the judicial system, an initiative that has United Nations support.

The participants receive a manual on how to hold their own workshops on justice with a gender perspective, with different training modules involving both theory and practice, which were designed with the participation of experts on justice and gender.

United Nations resident coordinator in Argentina Martín Santiago told IPS that the programme has everything necessary “to become a best practice for replication in all judicial systems in the region.

“Other justice systems provide gender training, but what was built here is an institutional architecture, with two offices that have clearly demonstrated a determination to move forward on gender equity,” he added.

Taking part in the launch of the workshops Tuesday were representatives of the Women’s Office as well as Argibay and Highton themselves, in order to underscore the support the programme has at the highest levels of the judiciary. The facilitator training workshops will be held in Buenos Aires.

“First we select the facilitators, based on their career record and skills, and then we give them training here and provide them with reading and audiovisual materials to hold workshops on these issues in their provinces,” Argibay explained.

According to the Supreme Court magistrate, the international conventions and other commitments that enshrine the rights of women, which have been signed by the Argentine state, are not sufficient to guarantee enforcement of these rights.

“Women who seek out justice continue to be mistreated,” Argibay said. “It seems to have become something normal to consider them liars when they accuse a man of violence or rape.

“Detecting these various situations in which women are at a disadvantage requires an intellectual effort to comprehend something that did not form part of our training, as well as sharpened senses to uncover cultural stereotypes,” she said.

In the workshops, the future facilitators review the tools and instruments offered by the right to equality before the law and the rights of women, and engage in exercises that allow them to reflect on how gender-based social and labour roles are assigned. They also analyse sexist language and discuss how to avoid discriminatory terms.

“Violence against women is a consequence of seeing the world from an absolutely machista point-of-view,” Judge María Laura Garrigós, one of the women selected to be a gender facilitator, told IPS.

“The judiciary has not yet incorporated that perspective, it’s something we still have to accomplish — a shift in paradigm that will enable us to see crimes in that context,” she said.