UXBRIDGE, Canada, Sep 17 2010 (IPS) - The waters of the Caribbean Sea are the warmest on record and the region’s imperilled corals are bleaching and beginning to die, experts warn. 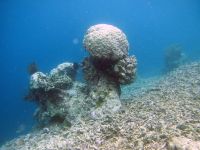 This year many corals are already bleached and dying in the southern Caribbean Sea, especially in the Lesser Antilles, according to Mark Eakin coordinator of Coral Reef Watch at the U.S. National Oceanographic and Atmospheric Administration (NOAA).

The waters are even warmer than they were in 2005 when a severe bleaching occurred across much of the Caribbean. More than 60 percent of corals around the U.S. Virgin Islands died, Eakin told Tierramérica.

Water temperatures in this region reach their annual peak between September and October.

The area affected by bleaching and dying corals will likely extend to the region east of Nicaragua, past the island of Hispaniola (Haiti and Dominican Republic) to Puerto Rico and the Lesser Antilles, and south along the Caribbean coasts of Panama and South America, according to a warning issued by Coral Reef Watch last month.

“There is the potential that this will be worse than 2005, unless some tropical storms come through and mix the warm surface water with deeper, cooler water,” Eakin said.

Coral reefs are found in less than one percent of the world’s oceans but are home to 25 to 30 percent of all marine species. Some one billion people depend directly and indirectly on reefs for their livelihoods.

The International Union for Conservation of Nature (IUCN) considers coral reefs one of the life-support systems essential for human survival.

A colourful piece of coral is made up of thousands of tiny animals called polyps, which create cup-like limestone skeletons around themselves using calcium from seawater.

Coral gets its colours from algae called zooxanthellae, which cover the polyps and produce sugars and amino acids to feed them. In exchange, the algae get a safe place to live with just enough light to grow through photosynthesis.

This 250-million-year-old partnership is disrupted when the polyps are stressed by too-warm sea temperatures or by pollution. They lose their colourful zooxanthellae coating and look white or bleached. Without the food that the algae provide, corals slowly starve and become vulnerable to disease.

Prior to the 1980s only one large-scale bleaching event had ever been recorded. An increase in water temperature of just one or two degrees Celsius above the average summer peak period is enough for bleaching to begin.

The longer the water temperatures remain above normal, the greater the bleaching. Those corals can recover if the stress is temporary — lasting weeks, instead of months.

The greenhouse effect resulting from carbon emissions, largely from the burning of fossil fuels, is trapping more heat in the atmosphere and is gradually heating up the oceans. In July, the global ocean surface temperature reached a record 0.62 degrees Celsius above the 20th century average, according to NOAA.

In Southeast Asia, ocean temperatures were 4.0 degrees above normal in May. Sixty to 80 percent of corals in various regions near Indonesia, Vietnam, Sri Lanka, Thailand, and Malaysia bleached, and some died, according to surveys done by the Wildlife Conservation Society, based in Indonesia.

Scientists there expect 2010 will be worse than the 1998 bleaching that killed 30 percent of reefs in the Indian and the western and central Pacific Ocean. That year, 16 percent of the world’s corals died due to bleaching.

Until the last decade or so, overfishing, pollution and coastal development were the biggest killers of coral. Those threats still exist, although there have been attempts to protect corals in marine protected areas (MPAs) and “no- take” fishery reserves.

But despite best intentions, those efforts have largely been ineffective, says Peter Sale, of the United Nations University’s Institute for Water, Environment and Health.

“Most MPAs do not work. We call them ‘paper parks’,” Sale told Tierramérica. They suffer from poor management and from design that fails to take into account the fact that reefs do not exist in isolation.

If coastal development results in pollutants or sediments flowing into the ocean, the nearby reefs are done for, even if they are in an MPA, he said.

There is also a stunning shortage of scientific data. “We don’t know how big an MPA should be to be effective,” said Sale.

In the Caribbean, the most important local fishing sector is lobster. But, according to Sale, no island fishery knows where its lobster comes from, so how could lobster be properly managed?

After hatching, lobster larvae are free-floating for an average of nine months, which enables them to travel hundreds of kilometres away from where they hatched, according to new research.

This new data is part of a larger project that has produced an MPA management guide: “Preserving Reef Connectivity: A Handbook for Marine Protected Area Managers”.

He stressed that proper local protection and management of corals is absolutely essential to help them withstand the effects climate change: bleaching and ocean acidification, a process that weakens reef’s calcium skeleton.

In the early 1980s, the residents of two small islands in the Philippines brought their coral reefs and fisheries back from the brink of extinction by setting up and managing no-fishing reserves.

In the Caribbean, MPAs need to be managed as a regional network that is connected to the continental coastal zone.

“Done well, corals, fisheries and the coastal environment will all benefit,” he said.