NEW YORK, Sep 21 2010 (IPS) - Sharon White remembers the breaking point vividly. She was 21 years old and had been married to Andre for a little over a year. Looking back, she describes their life together as “a nightmare. Every day was a fight.” 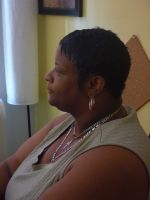 A domestic violence survivor, Sharon White says past abuse should be an important factor in criminal sentencing. Credit: Hannah Rubenstein/IPS

Reciting the laundry list of injuries she sustained at the hands of her husband, a former professional boxer, her eyes darken: fractured ribs, fractured jaw, blackened eyes, bruises. “I hung in there as long as I could,” she says, her voice edged with steel. “And then, one day, I started thinking about killing him.”

That was it. White gathered her things together and left. She hid for six months. No one knew where she had gone—not even her daughter.

A year later, after Andre had stopped coming to White’s mother’s house every day looking for her, White was working graveyard shifts as a private home attendant and selling drugs on the side. One rainy night, White accidentally left her purse at a customer’s apartment. When she returned the next morning to collect the purse, the pimp who lived at the apartment was drunk. He accused White of buying stolen jewelry on the street that rightfully belonged to him.

The man grabbed White and a scuffle ensued. “He pushed me up against the sink. I couldn’t breathe,” she says. “All I could think about was Andre—and here is another man putting his hands on me. I blanked out.” White reached in the sink behind her as she was being choked and grabbed the first object she touched. It happened to be a knife. She stabbed her attacker in the side.

“When I hit him,” she says, “I hit him with everything I had. This was a stranger; I didn’t even know this man. But to me, it was Andre. The two became one. And I wasn’t going to let nobody hurt me no more.”

The knife pierced through the tip of the man’s heart. His blood, thinned by alcohol, didn’t clot. He waited too long before going to the hospital. By the time evening fell, he was dead.

Sharon White was wanted for murder.

Last year, she was released from prison, where she has spent the past 11 years serving time on charges of manslaughter. Nine out of 10 women currently in prison have been victims of abuse during their lifetimes. White’s story is one of thousands.

Serena Alfieri, associate director of policy at the Correctional Association of New York’s Women in Prison Project, works with women who have been incarcerated as a result of domestic abuse.

“Over and over when we visit prisons,” Alfieri told IPS, “we hear the story of abuse woven throughout the larger stories of the reasons they were brought to jail.”

A critical flaw in the justice system, Alfieri believes, is that a history of abuse is not taken into consideration when judges mete out sentencing for survivors of domestic violence.

“There are so many injustices being committed in sentencing against women who are domestic violence survivors,” she told IPS. “Survivors who commit crimes are looked at as if they had committed a crime with the same motive and opportunity of any offender and often that’s not the case. They’re coerced, afraid, or being manipulated.”

“Really, the victim in this situation is being asked to commit a crime because she is a victim,” she adds. “This isn’t somebody who would go out and perpetrate a crime on her own had it not been for the abuse.”

The lack of discretionary sentencing in the courts system has prompted Alfieri, among others, to push for a change in judicial legislation: the proposed adoption of the Domestic Violence Survivors Justice Act (DVSJA), which would allow courts to take a history of domestic violence into consideration during sentencing.

The DVSJA would enable judges to assign “more reasonable, shorter” sentences and/or placement in alternative-to- detention programmes to domestic violence survivors whose crimes were a “direct result” of abuse, according to a draft report of the legislation that IPS was given access to.

Sital Kalantry, an associate clinical professor of law and faculty director of the Avon Global Center for Women & Justice at Cornell Law School, told IPS that reform of law and practice is crucial to address underlying structural problems.

“Statues weren’t designed to capture the intimate partner/violence situation,” she said. “They were designed for the stranger context.”

“As soon as domestic violence survivors enter a precinct, they’re looked at no longer as victims but as perpetrators who need to be prosecuted to the fullest extent of the law,” Alfieri added. “This black-and-white interpretation of the law is unjust, insane, and a violation of human rights.”

For women like Sharon, the passage of the DVSJA is critical. “Give the whole picture of a person’s background and what they’ve been through,” she urges. “Let abuse be a factor. Let the jury decide.”

“I understand that there are repercussions for the things that we do,” she adds. “But is 25 years in prison really necessary after somebody has been abused for half that time? Isn’t that punishment enough?”