PERU: “No Sentence Will Bring Them Back to Life”

LIMA, Oct 4 2010 (IPS) - “My son Javier received eight bullets, one for each year of his life. That pain can’t be erased by a sentence,” Rosa Rojas, who lost her husband and young son in the 1991 Barrios Altos massacre in Peru, told IPS. 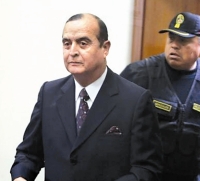 Those responsible for ordering and carrying out the massacre and other killings were sentenced Friday, Oct. 1 to between 15 and 25 years in prison.

Former President Alberto Fujimori’s (1990-2000) intelligence chief Vladimiro Montesinos and then army commander Nicolás Hermoza — the two most powerful men in the Fujimori regime, after the president — were sentenced to 25 years for authorising the creation of a secret commando that killed 25 people.

Santiago Martin Rivas, the army major who headed the death squad known as the “Colina Group”, and major Carlos Pichilingüe, his right-hand man, were sentenced to 25 years as well.

On Apr. 7, 2009, Fujimori himself received a 25-year sentence for ordering the killings by the death squad.

Montesinos pleaded innocent of all charges, but during the trial it was proven that he directly coordinated the murders with Rivas.

In 2006, Montesinos received a 20-year sentence for his participation in smuggling weapons to Colombia’s FARC guerrillas, in 1999. However, under Peruvian law sentences cannot be served consecutively.

Judge Inés Villa concluded that 19 former senior officers and agents planned and carried out the Nov. 3, 1991 massacre of 15 civilians at a barbecue in the Lima neighbourhood of Barrios Altos; the May 2, 1992 killings of nine peasant farmers in the village of El Santa, six hours north of Lima; and the Jun. 24, 1992 murder of opposition journalist Pedro Yauri.

According to the sentence read out in the Callao Naval Base, where the trial was held for security reasons, the government of Fujimori ordered the creation of an “elite commando” of Army Intelligence Service agents to carry out reprisals after attacks by the Shining Path Maoist guerrillas.

The court determined that none of the victims in the three incidents in question were members of the Shining Path — the argument used by the military officers’ defence attorneys to justify the killings.

In the case of the Barrios Altos massacre, it was later reported that the killers actually went to the wrong address, and slaughtered a group of people who were not suspects.

“We are satisfied with the sentences, but we aren’t happy. Nothing will relieve the pain we carry inside,” said Rojas, whose 31-year-old husband, Manuel Ríos, and eight-year-old son Jesús Ríos were among the Barrios Altos victims. “But finally justice has been done. It took years, but at last it has happened.

“Manuel and I made a living selling sweets. Javier was our oldest son. We also had two daughters. I was there the day the murderers came in and shot the victims. They were very cruel.”

For the killings of nine students and a professor from the university of La Cantuta, committed by the same death squad on Jul. 18, 1992, a group of agents were convicted two years ago, and others are still facing prosecution.

The actual members of the death squad were sentenced to between 15 and 20 years in prison for the Barrios Altos and El Santa massacres and the murder of Pedro Yauri.

The lawyer representing the families of the Barrios Altos victims, Gloria Cano of the APRODEH human rights association, said she was satisfied by the sentence in general terms, although she questioned some aspects.

“We do not agree with the acquittal of retired colonel Víctor Silva Mendoza, former head of the Army Intelligence Service,” she told IPS. “He was in charge of the logistics and weapons supplies for the group that committed the murders. We are going to request that the ruling with respect to Silva be annulled.”

Cano also said that some of the agents of the death squad invoked the legal benefits offered in exchange for a full confession, and their sentences were reduced from 25 to 15 years or less.

“We do not see their confessions as complete, because the former agents that took part in the murders of journalist Pedro Yauri and the nine campesinos from El Santa did not reveal the location of the graves where the bodies were buried,” Cano said.

“As long as the bodies are missing, the families will continue suffering. They did not deserve a reduction in their sentences because they have not told the whole truth,” she added.

The sentencing was scheduled for Friday morning, but the court suspended it because Montesinos and the members of the military on trial sang the army hymn, in open defiance of the justice system.

The hearing was rescheduled for Friday afternoon, and Montesinos took advantage of the presence of reporters to be photographed with his books “Sin Sendero, Alerta Temprana” (No Shining Path, Early Warning) and “Espionaje chileno” (Chilean Espionage).

In the court room, Jesús Sosa, a former member of the Colina death squad, held up his fist and gave cheers for the army.

During the trial, the accused justified the crimes under the argument that they were “at war against terrorism.”

Rojas said that since her husband and son were killed, she has not only suffered grief as well as rage over the lack of justice, but also harassment and threats from the military, who attempted to force her to keep silent.

“As a witness, I was inconvenient for them. They tried several times to hurt me and my daughters. There were many intolerable years, but we have managed to live to see justice done,” she said.

“But I can’t say I’m happy, because although those who are responsible are going to pay with 25 years in prison, they will receive the affection of their parents, wives and children, while I no longer have my husband or my son. I will never be able to feel their love. No sentence will bring them back to life for us,” she said.

Eleven former members of the military were acquitted on different grounds, and several of those who were sentenced after the long, tortuous trial announced that they would appeal. Now it is up to the Supreme Court to uphold, modify or overturn the sentence.