UGANDA: ICT Boom for Economy, A Bust for Some Women

KAMPALA, Nov 25 2010 (IPS) - The rapid growth of the ICT market in Uganda has been greeted with optimism over its potential to boost the country’s development. But less attention is being paid to the increase in gender based violence due to the use of information and communications technology. 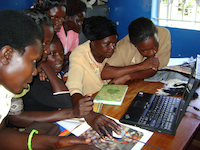 Women at workshop on ICTs and violence against women in Namaingo: conflict over access and privacy is common in Uganda. Credit: Susan Kinzi/IPS

Uganda has one of the fastest-growing ICT markets in the East Africa region, with mobile phone use in particular expanding quickly. Mobile phone penetration stood at 32.8 percent with 10.7 million subscribers in 2009. According to a recent report by Pyramid Research, the numbers should double to 20.9 million in 2015. The increase in mobile subscription is expected to also increase internet access. Presently just 1 in 10 Ugandans has access to the internet.

But the rapid adoption of mobiles has also seen a rise in invasion of privacy through SMS stalking, monitoring and control of partners’ whereabouts.

Anecdotal reports are backed by a new study, which found that the majority of ICT users have had conflicts within their families.

The study, by Aramanzan Madanda from Makerere University’s Department of Gender and Women Studies, found that about 46 percent of people had problems with spouses in relation to use of mobile phones and 16 percent reported having conflicts over use of computers.

These conflicts arose over issues of freedom and control. According to the research, conducted in two districts of Iganga and Mayuge from 2007-2010, the majority of victims of violence are women.

The research shows that communities are having difficulties coming to terms with the power of technology to bring about freedom for women.

“Traditionally, in Busoga (one of the study sites), a woman must seek her spouse’s consent to go anywhere, whether to visit a relative or go to the market,” Madanda explained. “But now women can be directly in touch with relatives and other people without their husband’s consent and since men have lost that power to control the women some turn to violence.”

Women often have to tell men who they are calling and who called them.

“And because of low literacy levels among women, they only know how to call. Most don’t know about safety features on phone or have any idea that their partners can view called numbers or read sent messages. They don’t use security codes,” the report says.

In some families, conversations must be on loudspeaker so that everyone knows who called you and what you are talking about.

The intrusion of women’s privacy using ICTs has also been exacerbated by women’s economic dependence on men.

The research found that the majority of people who have mobile phones are men. Eighty-eight percent of original buyers were men, while only 44 percent of the women had bought their phones. This means about 56 percent of women who own phones got them from someone else, usually from the husband or partner.

“The freedom lies in the purchasing power,” says Madanda.

Madanda’s study forms part of a growing awareness and acknowledgement of the darker side of the ICT boom in Uganda. In April, Uganda enacted the Domestic Violence Act, which for the first time acknowledges the link between the use of ICTs and domestic violence.

Under the law, repeated sending of abusive messages and calls to another person is regarded as an offense that can fetch a two-year jail term.

But of concern are Ugandan cyber laws, which pay limited attention to gender in general and none at all to gender-based violence.

“Only the Electronic Signatures Bill has one direct reference to females in section 86 (4), which is in respect to a search warrant for suspected offenders,” says a report by Goretti Zavuga Amuriat of WOUGNET.

The report says Uganda’s cyber laws are pre-occupied with e-government, e-commerce and data protection and the bills remain quite oblivious to the social and gender context.

“Most actors in the ICT industries are preoccupied with expansion and profit without much emphasis on the ramifications on gender based violence resulting from adoption,” said Madanda.

WOUGNET has trained women and rights advocates on how to use ICTs and also how to minimize the negative effects.

Through a programme aimed at strengthening women’s strategic use of ICTs to combat violence against women and girls, activists, service providers and women rights advocates have been given practical skills to ensure privacy.

“There have been successes. The women we trained now use mobile phones to report cases on domestic violence and other violence against women, although the ICTs available to most women in the fight against VAW are still very limited,” said Maureen Agena, a New Media trainer with WOUGNET.

Through campaigns like Take Back the Tech, the organisation has been successful in raising awareness of violence against women in Uganda through use of short message services (SMS). But how to address the violence that arises from use of ICTs remains to be tackled. The majority of mobile phone users are men and illiteracy is still a big challenge.

So ICTs can create jobs, reduce isolation of women but they still have a limitation as a tool for women’s empowerment. We still have attitudes towards women’s freedom. The poorest of the poor are women and they haven’t been reached with ICT in Uganda,” says Madanda.