MBALE, Uganda, Jan 28 2011 (IPS) - The cultivation of coffee beans for fair trade has turned the fortunes of this historical cash crop around in some poor rural areas on the slopes of Mount Elgon in eastern Uganda. 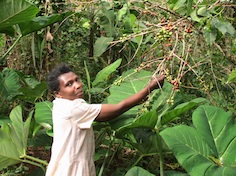 The east African country’s government liberalised the coffee export market in 1990s, attracting many coffee buyers to the Arabica coffee-growing districts. Increased competition went hand in hand with cash payments to farmers from the sale of coffee, as opposed to the old system where they had to wait for cooperatives to pay them.

Nevertheless, the prices remained low at 0.35 dollars for one kg of coffee and farmers could not break even. Some farmers lost interest in coffee cultivation while others started to cut corners. The coffee was not pulped well; it was mixed with husks and sand to increase weight.

Concerned about the decline in the quality and quantity of the historical cash crop, some former staff and members of the Bugisu Cooperative Union formed Gumutindo Cooperative Trading and adopted fair trade rules. Gumutindo means quality in the native language of the Arabica coffee- growing tribe that lives on the slopes of Mount Elgon in eastern Uganda.

Sam Magona, one of the founders of Gumutindo, told IPS that by joining the fair trade movement they wanted to reclaim the reputation of Ugandan Arabica coffee on the world market and to ensure that farmers got higher prices for their produce.

Gumutindo has since established it own warehouse in Mbale, some 300 km east of Uganda’s capital Kampala. It is affiliated to the British-based Fairtrade Foundation and exports organic coffee to Café Direct Plc and Trade Aid, among others.

Magona told IPS that, “fair trade practices sensitise farmers by reminding them of the things they know about coffee. Everyone growing coffee knows how to produce good quality coffee but they had neglected these practices. Fair trade has given the farmers better prices for their coffee. So they are able to solve most of their problems.”

Apart from paying higher prices, Gumutindo provides a social premium with each kilogramme of coffee that is produced. This premium comes in the form of a bonus to farmers which they can use to set up support projects in the areas where coffee is cultivated that are also aimed at those people not engaged in coffee production.

“Our rates guarantee farmers a second payment at the end of the season when the coffee has been sold and there is an additional social premium which the societies can use on community projects of their choice,” he says.

Gumutindo boasts a membership of over 15 societies, each representing 500- 1,000 coffee farmers. Nimrod Wambete, the newly elected Gumutindo chairperson, explains that more village societies across Mount Elgon’s slopes were joining them because of the social premium payment that has enabled societies to construct better storage facilities.

“Our farmers never got benefits from their coffee like they are getting from Gumutindo now,” Wambete insists. “Fair trade price means a good life to farmers. They get better prices so they can invest in their farms, they pay school fees for their children, they build better houses and they have improved living standards.”

A kilogramme of coffee was going for about two dollars at the end of 2010 while coffee buyers not operating under fair trade principles were paying 1.60 dollars for the same quantity. In some rural areas the price offered by middlemen to unsuspecting farmers was far less than 1.60 dollars.

When IPS visited Gumutindo’s busy warehouse, the workers – all women– were sorting coffee under tree shades. For grading purposes, they remove defective coffee beans. Each worker is paid per kilo of defective coffee beans sorted during the eight hours of work and receives a dividend at the end of the year.

Mary Namwano, one of the workers at the cooperative, told IPS that the earnings help her family, which would otherwise be totally dependent on her husband’s meagre salary. “The children would not be going to school if I was not working here,” she said. Namwano’s husband is employed as a municipal law enforcement officer earning about 30 dollars a month — not enough to run a five-member family.

Lydia Nabulumbi, Gumutindo’s quality assurance officer, told IPS that the sorting process is done both by machines and humans to ensure quality. “The criteria for determining whether to buy the coffee are strict.

“When the coffee comes through the gates, our quality assurance people check the beans. Quality is about the physical appearance of the coffee beans and how clean they are. Then they check the moisture content and the number of defects. When they decide that it is good quality, they give permission for the coffee to be bought and stored in the warehouse for export,” she adds.

Over the years, the coffee beans that Gumutindo receives has been cleaner, which has meant less sorting than before.

“Usually when selling at a low price, the traders’ priority is quantity rather than quality but at Gumutindo we have demonstrated that quality pays and it has worked,” enthuses Nabulumbi.