HARARE, Mar 25 2011 (IPS) - The identity of as many as a thousand decomposing bodies in an abandoned mine in Mount Darwin, 100 kilometres north of Harare, may never be known. “War veterans” associated with the ruling Zimbabwe African National Union-Patriotic Front party are removing them with no regard for preserving evidence. 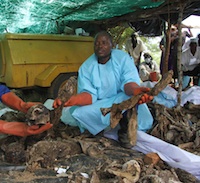 According to ZANU-PF, the human remains in the mine belong to people killed in the late 1970s during the country’s liberation war.

What has raised eyebrows is the state of the bodies, which are still intact, only partly decomposed – a powerful stench hanging over the site.

When IPS visited the mine site on Mar. 18, as part of a tour organised by the Ministry of Information, hundreds of decomposing body parts were piled on the ground not far from the entrance to the mine shaft.

A pathologist who spoke to IPS on condition of anonymity said bodies allegedly dumped in the mine three decades ago should not look like those being removed from the site.

“Ordinarily by this time there should only be bone-remains if it’s true that these bodies are of people who died in the 70s,” the pathologist said. “Certainly there should not be any smell at all from the remains over 30 years after those people died.”

Over the past three weeks, members of the country’s war veterans association have been removing bodies from the mine. The veterans say they have long known that the mine held dead bodies, but are acting now to protect them from informal gold miners.

Zimbabwe's war veterans association is a group that includes actual veterans of the 1970s liberation war and many others who support the Zimbabwe African National Union-Patriotic Front.

The veterans have been instrumental in political violence, particularly the land occupations that began in 2000 and the recent electoral violence that prevented the presidential run-off in 2008.


According to one of the war veterans on the scene, George Rutanhire, once all the bodies have been exhumed from the mine – there are four other mine shafts with bodies in them – they will be re-buried at the Mt Darwin Provincial Heroes’ Acre.

The Movement for Democratic Change party, which has been in an uneasy government of national unity with ZANU-PF since 2008, insists the bodies found are those of MDC activists who have disappeared without a trace in any of several waves of political violence since 2000.

The MDC and ordinary Zimbabweans alike have queried the way bodies are being removed by untrained personnel.

MDC deputy spokesperson Kurauone Chihwayi says he doubts the remains belong to victims of the war. “These bodies look fresh; ZANU-PF should come clean on the issue of these exhumations,” he said.

“If those people died during the war, why are they only exhuming them now when they claim to have known about the bodies all these years? Those remains are of MDC [members] who were killed by ZANU-PF activists [beginning in] 2000 and especially during the runoff elections of 2008.”

“What do you expect from the MDC? It’s their standard line just to criticise everything ZANU-PF does. They have got nothing to say.”

Last week, the ZANU-PF’s Fallen Heroes of Zimbabwe Trust forced school children, teachers and villagers from the surrounding area to view the decomposing remains so that they could “appreciate how evil whites are.”

“Those villagers know that many of those remains are of MDC activists but they are too scared to say it,” said Chihwayi. “That’s why ZANU-PF is now instilling fear by showing them those remains. This shows that we are again not going to have free and fair elections.”

The MDC has also accused its rival of trying to plant fear in the population that those who don’t vote for it will end up dead. Mugabe has called for fresh elections to be held this year.

Chihwayi said that by failing to use forensic techniques as the bodies are uncovered, to establish when and how these people died, ZANU-PF is causing a serious rift in the government of national unity.

“They must be transparent in the exhuming of these bodies. ZANU-PF is also now using the remains for its propaganda purposes to up whip emotions ahead of elections.”

Earlier this week, the Crisis in Zimbabwe Coalition, warned that the human rights situation in the country is getting worse, and predicted violence would further intensify if the elections are held this year.