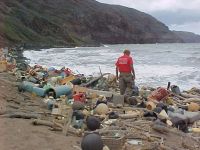 On remote Pacific island atolls, diligent albatross parents unknowingly fill their chicks’ bellies with bits of plastic that resemble food. The chicks die of malnutrition, and when their bodies decay all those plastic bottle tops, disposable lighters, and the ubiquitous bits of plastic detritus get back into the environment in a cruel perversion of ‘recycling’.

There is now so much plastic in the oceans it is likely that virtually every seabird has plastic in its belly if its feeding habits mean it mistakes plastic bits for food. The same is true for sea turtles, marine animals or fish, experts say.

Northern fulmars, a common seabird numbering in the millions, have a collective 45 tonnes worth of plastic bits in their bellies, estimates Jan Andries van Franeker, a biologist with the Institute for Marine Resources and Ecosystem Studies at the University of Wageningen in Holland.

At least 95 percent of fulmars in the North Sea where van Franeker has been working for three decades have one to several dozen bits of plastic in their stomachs. The same is true for related species like the tiny Wilson’s storm petrels, which unknowingly transport an estimated 35 tonnes of plastic from their wintering grounds in the North Atlantic to breeding grounds in the Antarctic, he says.

“If a seabird’s feeding habits mean it could mistake plastic for food, then it will likely have plastic in its stomach,” he said in an interview at the weeklong Fifth International Marine Debris Conference, which ends Friday in Honolulu, Hawaii.

It has been 10 years since the last international marine debris conference and the hope is that industry, civil society, researchers and policy makers will find common ground on the strategies and best practices to assess, reduce, and prevent the impacts of marine debris.

“I sometimes have this kind of dream or nightmare where those fulmars drop all of that plastic on an audience in big conference room like this,” van Franeker told IPS. “It would make a very clear statement.”

It is a statement that needs to be made with the escalating problem of the world’s oceans being filled a staggering amount of plastic, fishing gear, and all other kinds of debris. There is no accurate accounting of exactly how much but it appears to be in the tens of millions of tonnes each year and is mostly from land-based sources.

A 2006 United Nations Environment Programme estimate suggested every square kilometere of world’s ocean has an average of 13,000 pieces of plastic litter floating on the surface. A walk on an ocean shoreline anywhere in the world will provide ample evidence of the scale of the problem – unless it was recently cleaned up.

The Ocean Conservancy, a U.S.-based NGO, has been leading beach and shoreline cleanups around the world for 25 years. Over that time, nearly nine million volunteers in 152 countries have cleaned up and catalogued 66 million kilogrammes of trash, according a new report released here in Honolulu.

The top three trash items collected by number of items found were cigarette butts, food packaging and bottle caps or lids. Plastic bags, bottles and straws or stirrers also made the top 10.

“People don’t realise that the cumulative impact of marine debris is a major issue for the oceans,” said Achim Steiner, executive director of the United Nations Environment Programme (UNEP).

Steiner said marine debris is an “out of sight, out of mind” type of problem but noted there was new science showing that tiny plastic particles called microplastics may be leaching endocrine disruptor chemicals. affecting the health of marine species and possibly humans.

“We need to become less reliant on plastics,” he told conference participants in a video statement.

In 1950, just five million tonnes of plastic was manufactured globally. Today each person in developed countries uses about 100 kgs of plastic annually while less developed use 20 kgs and that number is growing rapidly.

Steiner said policies like South Korea’s mandatory Extended Producer Responsibility System (EPR) are not only part of the solution but a new source of jobs and income. The EPR system requires manufacturers and importers to recycle a certain amount of their products. In the five years since the programme’s launch in Korea, six million tonnes of waste has been recycled, including 70,000 tonnes of plastic, producing a financial benefit of over 1.6 billion dollars.

“Degradable or compostable plastic should be banned. The bio-plastics have as much plastic as those made from oil,” he said.

The so-called degradable bio-plastics simply break down into microplastic particles faster than traditional plastics. “We might not be able to see them with our eyes but the plastic is still there,” he added.

The industry pushes degradable and compostable plastics so that one-time short term use of plastic can continue, he said. “One time use of plastic is simply unsustainable.”

Van Franeker is not anti-plastic. “It is a wonderful material. Real plastic is valuable. It can be made to be safe and reuseable.”