HAVANA, Apr 18 2011 (IPS) - While for their parents, leaving Cuba was a traumatic event because of the impossibility of returning, for younger generations, “moving abroad” is becoming more and more of a normal decision, just another alternative for the future. 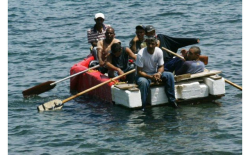 Most illegal emigrants from Cuba are unemployed young men, many of whom have criminal records. Credit: Jorge Luis Baños/IPS

“I don’t think that leaving the country is the only, or the best, solution,” 29-year-old Guillermo Estévez (not his real name) told IPS. “I have really intelligent friends who have decided to stay and build their lives here. But I feel like I’m in the middle of a silent wave of emigration. In the last few years, I have gone through one farewell after another.”

Perhaps the reason is that in the early 1980s, the Cuban government began to allow Cuban exiles to visit their home country, and in the 1990s it began to grant permits for temporary residence abroad. Until then, leaving the country had been a permanent move, since the 1959 revolution.

Other aspects are the networks of families and friends who are waiting to welcome loved ones in other countries; the greater access to information of all kind that young people today enjoy; and above all, values and aspirations that put increasing weight on personal fulfilment and higher living standards.

According to a University of Havana study that includes email testimony from young Cubans living abroad, the severe economic crisis that hit the country in the 1990s led to emigration being seen as just another alternative or possible solution.

For Antonio Aja, an expert on migration issues, the fact that Cubans are leaving the country at younger and younger ages is a reflection of conflicts provoked by the crisis and the circumstances among certain segments of today’s youth, including “lack of motivation, disinterest and scepticism” that they can realise their aspirations in Cuba today.

Although to a lesser extent, Cuba has become, like Mexico, El Salvador and Nicaragua, a major source of emigrants in Latin America and the Caribbean. And in line with trends in those and other countries, most of the migrants are young people, and the proportion of women heading abroad is growing.

The United Nations regional agency ECLAC reported that in the early 2000s, over 10 percent of the roughly 200 million migrants in the world were from Latin America and the Caribbean. And more than one million of the people from this region living outside of their country of origin in 2000 were professionals or skilled workers.

The exodus of skilled workers and university graduates from Cuba grew, until they represented 12 percent of emigrants between 1995 and 2003, according to specialised sources. And the average age of emigrants in 2008 was 30.5 years among those who went to live in the United States, 29.1 years (emigrants to Spain) and 26.2 years (emigrants to Italy).

“For me it’s a door that has opened, after a number of other doors were slammed shut,” said Estévez, who along with his wife has spent nearly two years doing the paperwork to move to Canada legally, through a programme designed to promote immigration of skilled workers to that country.

“First I applied for a job at a place where I would have had good economic prospects, and they told me I didn’t have enough experience. Then I was invited to give a conference, and my boss didn’t let me travel because I was too young. It’s really frustrating because they teach you to think and then they don’t let you think,” he said.

“I’m not leaving Cuba because of economic troubles but because I just don’t see a solution to them in any reasonable lapse of time. I’m 29, how long do I have to wait?” said Estévez, a graduate in humanities from the University of Havana, who shares an apartment with his wife, brother, parents and maternal grandparents.

More “earthly” needs are combined, in his case, with the dream of seeing other parts of the world – a possibility that is limited in Cuba. “Having a house and travelling, which seem to be such simple things, translate into individual independence, the possibility of building a family, and spiritual and professional development,” he said.

The elimination of the exit visa that Cubans need to be able to travel abroad is one of the demands of Cuban citizens that the government of Raúl Castro may be in a position to meet; in the current process of reforms aimed at “updating the socialist model.”

“There are young people who would like to emigrate, but what young people really want is to travel, go to other places, experience them and be able to come back,” sociologist María Isabel Domínguez, the author of several studies on youth in Cuba, told IPS. “We see that tendency even among young people from rural areas, where other aspirations have not yet been met.”

Some young people have set their sights on Canada, others have sought to prove that their grandparents came from Spain, in order to obtain Spanish citizenship and a European Union passport, some marry someone from another country to obtain an exit permit, and then there are those who seek to leave illegally, sometimes by paying people traffickers.

Among the young people who stay in Cuba – who make up a majority of the total – there are those who have an elderly parent to take care of or other family obligations, those who lack opportunities to leave, and those who stay simply because they love their country as it is, with its flaws and its virtues.

“They always talk about those who leave, and never about those of us who stay,” Niuris Cabrera, a 27-year-old computer expert who fights an everyday battle in the attempt to get ahead, told IPS. “The ones who leave long for what they left behind, and we long for what left with each friend.

“It is my choice to live in Cuba,” she said.