ASUNCIÓN, May 2 2011 (IPS) - Appointed to the gigantic task of building international understanding of violence against children and adolescents, 58-year-old Portuguese lawyer Marta Santos Pais is based in New York and works with a small staff of only seven people. 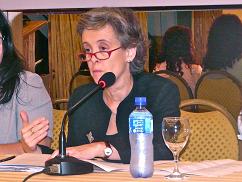 Marta Santos Pais at the meeting in Asunción. Credit: Courtesy of G. Cabrera

To compensate for the lack of human resources, Santos uses her evident personal commitment, but is also increasingly recruiting allies among children themselves, calling on them to participate in a massive process of transformation so that they can grow up free from the experience of violence.

Santos has a track record of over 25 years of working for children’s rights: she worked for the United Nations Children’s Fund (UNICEF), and in 2009 U.N. Secretary-General Ban Ki-moon appointed her Special Representative on Violence against Children, at the level of assistant secretary-general.

The Special Representative participated actively in different forums at the South America meeting to follow up on the recommendations of the U.N. World Report on Violence against Children, which ended Apr. 29 in Asunción, Paraguay.

The two-day meeting drew government delegates from around South America, representatives of civil society organisations, and more than 60 children and teenagers, as well as international experts on child development and children’s issues.

In an interview with IPS before returning to New York, Santos said that between 500 million and 1.5 billion children suffer different kinds of violent abuse every year, and the main offenders were family members, teachers and other guardians entrusted with their care and protection.

Q: How long has the U.N. had a Special Representative for violence against children? A: A U.N. resolution was adopted in 2007 and implemented in 2009. The position was created to ensure concrete and systematic follow-up of the World Report on Violence against Children, presented to the General Assembly in 2006.

Q: Why was it considered necessary to create the post? A: The real reason is that conditions were ripe for the issue to receive specific attention, and it was recognised that it deserved the support of the U.N. and a platform that would guarantee that action would be taken. Prior to that time, violence against children was not a priority. But after the World Report, it became an absolute imperative.

Q: What is the estimated number of children affected by different forms of violence? A: There are no precise statistics, but according to the research results we have received from different countries, between 500 million and 1.5 billion children are victims of some kind of violence every year. UNICEF carried out a recent study that found that more than 75 percent of children aged two to 14 suffered some form of physical or psychological abuse.

Q: What is the most frequent type of violence? A: We don’t have disaggregated data, but according to the reports received, the shocking thing is that in most cases, the violence is perpetrated by people with a very close relationship with the child, people he or she trusts implicitly. It happens at school, in institutions that should be places of safety and protection, and in the bosom of the family.

Q: What would you recommend as good practice for combating violence against children? A: One practice that is growing and is tremendously important is participation by children and teenagers themselves. Because it is very difficult to talk about their reality when one can only attempt to guess what kinds of violence they suffer, in what contexts, how they feel about it, and how deeply they are affected.

When we listen to them, one of the most important things we realise is that children are victims of violence, but they also have extraordinary resilience, and they are very much aware of their key role in building a different kind of society.

At the South American meeting, it was inspiring to see children reflect on possible solutions in schools, families and shelters. In my view, that was the most important contribution of the meeting. But in many countries and societies, children are not accorded the leading role they deserve. We must create the conditions for children to participate as allies in this process.

Q: Why do you think so few countries have laws forbidding corporal punishment of children? A: Most of them still regard physical punishment as the preserve of parental authority, part of the discipline and education of children. This is an erroneous perception that is deeply rooted in our societies. And it means that when government or civil society leaders propose a change in the law, they encounter a lot of resistance.

However, since the publication of the World Report, the number of countries where such punishment is forbidden by law has risen from 16 to 29, and at least 20 more countries are on the way to passing such laws.

Q: And is passing a law enough? A: I have a lot of hope in this process. But I do also recognise that if the law is not enforced, or if people are not aware of it, it will not produce any changes. The process needs to be accompanied with public information, education and data dissemination, so that the law may be an instrument for attitude change, and not just a decorative document that makes no difference in reality.

Q: Should the law punish those who physically abuse children? A: Different countries adopt different approaches. Some have enshrined protection against violence in the constitution; others have placed it among laws on parental duties. But there are countries, like Portugal, where laws against physical punishment are part of the criminal code.