HARARE, Jun 9 2011 (IPS) - In her glory days, death-row inmate Rosemary Khumalo (66) lived life dangerously on the edge. She was a sanguinary fortune hunter who would resort to anything, even murder, to land her loot, according to court records of her trial. 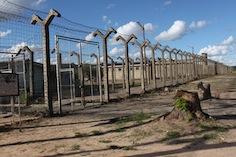 Her last crime in 1998, which ended with the murder of her businessman suitor Maxwell Sibanda, marked the end of her life of crime, and ushered in her new life as a death-row inmate at Zimbabwe’s notorious Chikurubi Maximum Security Prison in 2000.

Convicted of the murder of Sibanda and armed robbery in 2000 and sentenced to death, now a frail and pale shadow of her former self, Khumalo has been waiting for her execution for over a decade.

“I have petitioned the President (Robert Mugabe) for clemency more than five times. Two of these petitions have been turned down while three have not yet been responded to.

“I am now frail and suffer ill heath. I have become hypertensive and all I plead for is mercy. This waiting, not knowing when I will be executed has become torture that is worse than the death sentence I am waiting for,” Khumalo told IPS from her cell at Chikurubi Maximum Security Prison.

While Khumalo has been on death row the longest, she is not alone; there are 51 others awaiting execution in Zimbabwe. The last person to be hanged in this southern African country was Mandlenkosi ‘Never’ Masina Mandha who was executed in July 2005.

Zimbabwe is drafting a new constitution and during the consultative outreach programmes, mixed reactions were recorded. Both President Robert Mugabe’s Zanu PF and Professor Lovemore Madhuku’s National Constitutional Assembly (NCA) agree on the retention of the capital punishment on Zimbabwe’s statutes.

NCA’s draft constitution states that: “As part of the Bill of Rights, this draft proposes that the death penalty be abolished in Zimbabwe in respect of all other offences except serious cases of murder.”

Section 37 of the controversial Kariba draft signed by the three parties in the government of national unity (Zanu PF, Prime Minister Morgan Tsvangirai’s Movement for Democratic Change-Tsvangirai (MDC- T) and the Deputy Prime Minister Prof Arthur Mutambabra’s Movement for Democratic Change- Mutambara (MDC-M) states: “Every human being has the right to life and may not be deprived of it intentionally. A law may permit the death penalty to be imposed on persons convicted of murder but the penalty may be carried out only in accordance with a final judgment of a competent court…” (Although the MDC-T is a signatory of the Kariba draft they have backtracked on its contents and now say their position is anti-capital punishment.)

While the politicians call for the retention of the death penalty, civic society has been engaged in a spirited campaign against it.

The Catholic Commission for Justice and Peace Alouis Chaumba said his organisation was lobbying the minister of justice and legal affairs Patrick Chinamasa for the review of the death penalty. Human rights activist and lobbyist for the abolishment of the capital sentence Sanderson Makombe believes now is the time for Zimbabwe to remove ‘this uncivilized sentence’ from its statute books.

“There is no scientific evidence to support the death sentence as a deterrent to criminal behavior compared to other forms of punishment.

“The death penalty is retributive and justified vengeance with the high costs of the litigation far outweighing life in prison sentences,” said Makombe.

He said if put to a referendum, the majority of Zimbabweans might favour its retention on the country’s laws.

“Because we are more prone to want revenge, we do not believe those that kill should be spared and treated differently.

“In fact, the majority will probably say prisoners have no rights at all. They forfeit their rights when they commit crime. However, the arguments for abolishing are technical and not populist,” noted Makombe.

Because of the long lapse since the last execution, former deputy minister of justice and legal affairs Jessie Majome believes Zimbabwe could be on the road to the abolishment of the death sentence.

“The country executed in 2005 and if you check the trends in our courts, you will notice the reluctance to impose the death sentence. There is restraint on the death sentence from the courts,” said Majome, who is also a Member of Parliament.

In apparent reference to the capital sentence, his successor former Chief Justice Antony Gubbay is recorded as having said: “What may not have been regarded as inhuman or degrading a few decades ago may be revolting to new sensitivities, which emerge as civilization advances.”

Makombe explained that Britain only abolished the death penalty in 1964 after reviews showed that some people had been executed following erroneous court judgments.

“Equally tragic mistakes have been made by the courts in Zimbabwe. An innocent woman Sukholuhle Kachipare, who was on death row for a long time in Chikurubi Maximum Security Prison was only released in 2001 following a judgment review that showed she was innocent,” said Makombe.

Globally, more than 96 countries have abolished the death penalty for all crimes, eight for ordinary crimes and 43 are de facto abolitionists (countries with a death sentence but haven’t used it in the last 10 years and have committed not to use it). Africa has 15 countries that have abolished the death sentence while 21 have committed not to use it although it is still in the statutes.