Eleven Million at Risk in Horn of Africa

UNITED NATIONS, Jul 19 2011 (IPS) - “I have never seen anything like it. Many mothers have lost three or four children. It’s a tragedy out here,” Austin Kennan, regional director for the Horn of Africa for Concern Worldwide, told IPS from within the crisis zone. 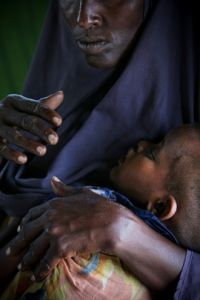 The United Nations and humanitarian workers report that food insecurity is now at emergency levels across the Horn of Africa, affecting Kenya, Ethiopia and especially south Somalia, with 11 million people in dire need of emergency assistance due in part to a major prolonged drought.

“From our point of view, this is the worst drought we have seen in Africa since the 1950s, but it must be remembered that this is not the only factor that led to this level of crisis,” Alun McDonald, media and communications officer for the Horn, East and Central Africa at Oxfam, explained to IPS.

“The effects of high staple food prices and the conflicts in the region over the last few decades have become all the more devastating due to the drought,” said McDonald, who is based in Nairobi. “This combination has wreaked havoc in the region.”

So dire is the situation that the Islamic terror group Al-Shabaab has lifted restrictions on foreign aid workers coming into the areas in Somalia they control.

But many aid workers and agencies are wary of returning. For example, the U.N. World Food Programme states that it won’t even consider returning to Al-Shabaab-controlled territory until after an 18-month absence.

Valerie Amos, the U.N. Emergency Relief Coordinator, spent two days in the region earlier this month. “I spoke with a woman who walked five hours with her children to get help,” Amos said. “More and more children are malnourished. Livestock has died as has a way of life. People have lost everything.”

Many Somalis have simply abandoned their bone-dry farms and moved into the capital Mogadishu in hopes of avoiding starvation.

Scores of civilians have gone further. The rate of refugees arriving from Somalia into Ethiopia surged from 5,000 a month to 30,000 in the second week of June alone.

The influx is even larger in neighbouring Kenya. The U.N. states that thousands of Somalis crossing the borders are arriving in the world’s largest refugee camp, Dadaab, in Kenya.

A few miles away from Dadaab lies a brand-new refugee camp built by the U.N. for 20 million dollars in 2010.

Yet it lies empty due to complaints from the Kenyan government that opening the camp will bring too many refugees and provide cover for the Somali terrorist group Al Shabaab among others who have targeted the country in the past.

Late last week, a group of UK aid agencies including Concern and Oxfam launched a TV and radio fundraising appeal. The British government has also pledged 52 million pounds in aid to the region.

Since last year, when USAID’s Famine Relief Warning System Network saw the crisis coming, the U.S. government has provided a total of 383 million dollars in emergency food and water, health care and hygiene supplies, including 348,000 metric tonnes of food.

But if a swift intervention is not organised by the international community, there are fears of a repeat of the famine in Ethiopia in the mid-1980s, when around one million people died.

“More money and assistance is needed to provide the required levels food and water,” McDonald said. “We estimate that around 800 million dollars will be needed to effectively tackle the problem. Slow pledges are being made but quicker action must start now. ”

The U.N. is expected shortly to declare the crisis to be a famine in parts of southern Somalia.

The announcement will likely be made by Mark Bowden, humanitarian co- coordinator for Somalia in Nairobi, based on data collected by the Food and Agriculture Organization.

The use of the word “famine” is based on rates of hunger, death and malnutrition. These levels must also be widespread in order to justify the use of the term.

The use of the term is expected to focus more world attention and hence more aid to the troubled area.

McDonald stressed to IPS that, “The work must not stop once this crisis has passed. In the long term, we need to fix a broken system so this doesn’t occur again. Issues such as food prices, agriculture dependency and grazing rights need to be tackled.”

“We used to see a serious drought in Africa every 10 years, then it became five and now it’s every two or three years,” he added, in a reference to the global climate changes now occurring due to fossil fuel emissions.

U.N. Special Advisor Jeffrey Sachs agreed, saying at a press conference that, “The famine crisis in Kenya and the Horn of Africa will never be solved by emergency relief operations like what we are seeing now. What is needed is sustained investment in dry lands of the region to pull people out of the extreme poverty.”

“The pastoralists have been so poor that whenever they experience drought, they are totally devastated. They need massive investments to strengthen them, not relief supplies,” he said.