SYDNEY, Jul 19 2011 (IPS) - Laurie Humphreys was on the first ship after World War II that brought 150 British boys and girls, aged five to 14 years, to Australia in 1947. At 13, he was promised oranges and sunshine and an adventurous holiday, but reality was different. 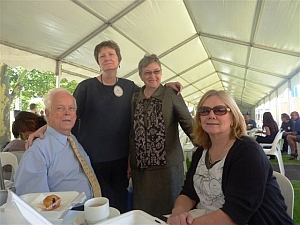 British film director Jim Loach’s latest ‘Oranges and Sunshine’, has brought those painful memories flashing back for Laurie and many of the nearly 500,000 ‘Forgotten Australians’, comprising over 7,000 former British child migrants, and White Australian and aboriginal children, who were removed from their families until the 1970s with the aim of giving them a better life.

Children were placed in care for reasons such as being orphaned, born to single mothers, parents separated or divorced, poverty, and domestic violence. Many were wrongly told their parents were dead.

The film tells the story of Margaret Humphreys, a British social worker who in 1987 investigated and brought to public attention a government programme of forcibly relocating poor children to Australia and other Commonwealth nations.

Now 77, Laurie has spent decades searching for his family. He was able to reconnect with his brothers, sisters and extended family, but his father died before he could afford to return to England in1982.

“Time is of the essence in finding and connecting families. Last year, the British government paid for a trip to enable me to visit my remaining family and my father’s grave. My mother had died when I was four years old and my father placed me in an orphanage in Southampton,” Laurie told IPS.

The Australian government is providing 3,180,000 US dollars for the first phase of the national ‘Find and Connect Service’.

“Providing services to help them reconnect with their identity and with their families is one way the government can help heal the legacy of the trauma and loneliness of lost childhoods,” Jenny Macklin, minister for families and community services said, last month.

“We are sorry. Sorry that as children you were taken from your families and placed in institutions where so often you were abused. Sorry for the physical suffering, the emotional starvation and the cold absence of love, of tenderness, of care. Sorry for the tragedy, the absolute tragedy, of childhoods lost,” Rudd had said.

But, the fight for reparation continues. The Australian central government says compensation is the responsibility of state and territory governments. Three states have provided compensation, but the other three have not.

Caroline Carroll, records and reunion coordinator at Open Place, a service for ‘Forgotten Australians’ in Victoria, was placed in Sydney’s Bidura Children’s Home at 14 months. She was moved to different sets of foster parents, making it impossible to have any sense of belonging.

“One foster mother would hold my head down in the bath until I couldn’t breathe, she cut my long plaits and sold my hair. Back at Bidura, before being sent to the next foster home, at nine years I was given the standard vaginal tests – legs tied in stirrups. Those years were full of fear and terror,” says Carroll, recounting the dehumanising treatment meted out to her and other children.

“The Christian Brothers-run Bindoon Boys Town, 80 km north of Perth, was also more a slave camp than an orphanage. Children worked on construction sites from dawn until dusk with daily beatings being the norm,” adds Laurie, a former transport workers union vice-president.

The plight of the ‘Forgotten Australians’ has been documented in three Senate committee inquiries, where some spoke out for the first time about sustained brutality, solitary confinement, harsh and cruel punishments like cold showers and being paraded naked, names being changed to erase identity, siblings being separated and contact with family restricted or denied.

“As the ‘Forgotten Australians’ age, one of their fears is of being institutionalised again. Authorities need to involve them in the decision making and work with them and their families to address their needs,” Eris Harrison from the Alliance for Forgotten Australians (AFA), a national advocacy group, told IPS.

Caroline, who married at 20 and had two children says, “The marriage didn’t last. Without doubt my background would have contributed to this. That fear of rejection never leaves. I understood love when my kids were born and now my grandkids are the love of my life.”

For Laurie too, expressing love has been difficult. “There is a distinct void. I married twice and my wives said that I lacked affection.”

“On arrival at the Fremantle Port in Western Australia all those years ago, we were told that we were brought here to fill the empty cradles as Australia needed good White stock,” Laurie said.

“The motto was ‘Populate or Perish’. I have literally lived up to it and today have over 70 descendants.”