NEW YORK, Jul 6 2011 (IPS) - Henry Velandia, an immigrant from Venezuela, will not be deported, federal immigration officials informed him last week. Now he and his husband, Josh Vandiver, will be able to remain together in the United States. 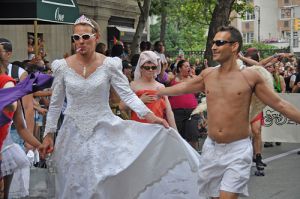 According to Lavi Soloway, the couple’s lawyer, an Immigration and Customs Enforcement official said Velandia’s case was “not an enforcement priority” at the time.

The cancellation of Velandia’s deportation proceedings marked the second of two notable victories for gay and immigrant rights in the past week, the first being the legalisation of gay marriage in New York on Jun. 24.

Immigration and gay rights advocacy groups hope New York’s decision will also ratchet up the pressure on the federal government to expand gay rights, even as they recognise that a state’s decision to legalise gay marriage has no direct legal impact on those rights.

Married in Connecticut in August 2010, Vandiver and Velandia live in New Jersey. Velandia, who is Venezuelan-born, came to the U.S. in 2002 and had faced deportation since last October, after his visa expired and his application for a work visa was rejected.

Yet even as his legal spouse under state law, Vandiver cannot sponsor Velandia for U.S. residency, as immigration is federal policy and the federal government does not recognise same-sex marriages under the Defence of Marriage Act (DOMA). DOMA states that marriage is a union between a man and a woman, the existing Immigration and Nationality Act (INA) does not recognise same-sex partners as family.

Soloway had filed a request months earlier asking for the government to use discretion in Valendia’s deportation case and one of the factors he asked them to consider was the decision by Obama and the Justice Department.

The judge who suspended the deportation proceedings in May did so because of a pending investigation by Holder into whether the gay partner of a U.S. citizen could obtain residency.

Both decisions marked a step forward in rights for gay immigrants, but it also served as a reminder of the disadvantages others in same- sex relationships face.

Despite comprising a relatively small population – bi-national gay couples in the U.S. number about 36,000 – the community of gay immigrants remains significant as the convergence of two groups with similar struggles against discrimination and for legal rights and recognition.

Gay rights advocacy groups hailed Obama’s decision, but even if the president believes DOMA is unconstitutional, pointed out Chapman School of Law professor Marisa Cianciarulo, a federal court would still have to declare it unconstitutional or Congress would have to repeal it in order for DOMA to become illegal.

“Just the president coming out and saying, ‘Well, this law is unconstitutional,’ doesn’t mean the law can’t be enforced,” she told IPS. “That’s not within the president’s role within the separation of powers.”

Even if recognised by state law, same-sex marriages are subject first to the oft-contradictory provisions of federal law, as the experience of Velandia and Vandiver demonstrated.

A similar instance is the story of Edie Windsor, whom the government forced to pay estate tax on the inheritance left her by spouse, Thea Spyer, after she died in 2009. Under federal tax law, the surviving spouse does not pay tax on inheritances left to him or her. But under DOMA, again, the federal government did not legally recognise Windsor as Spyer’s wife, even though their home state of New York did. The couple married in Canada in 2007.

In November 2010, Windsor contested the constitutionality of DOMA in Windsor vs. United States. The most recent action was a motion she filed last week for summary judgment.

The Uniting American Families Act (UAFA), a provision of a comprehensive immigration reform bill introduced by Democratic Senator Robert Menendez of New Jersey last week, has been proposed in both the House and the Senate to give permanent partners the same rights as spouses in heterosexual marriages to sponsor partners for citizenship or permanent residency.

Running counter to its potential to open the doors of immigration benefits to LGBT couples, however, is the fact that UAFA has been languishing in the House for the past 10 years.

For Congress to give immigration benefits to same-sex couples would have a “tremendous impact” on the gay community, Cianciarulo told IPS. Though the actual people affected would be relatively few, the “validation and recognition and acceptance on the part of the federal government” would be extremely significant.

Legalising gay marriage in New York may not have immediate implications for gay couples, but Steve Ralls, spokesperson for Immigration Equality, told IPS that its effect could be more indirect yet still significant.

“There’s no question that with every state that moves forward in recognising gay and lesbian couples that pressure builds on the Obama administration and members of Congress to repeal DOMA,” he said. “We are moving closer and closer to federal recognition of gay and lesbian couples, whether that be through the courts or Congress.”

He noted, however, that the passage of civil rights legislation is often extremely slow. “It can take many years for the courts to ultimately decide the fate of federal laws and DOMA will be no exception,” Ralls predicted.