KARACHI, Sep 22 2011 (IPS) - Faced with serious political instability and a deteriorating industrial climate, Pakistan’s garment exporters are turning to Bangladesh, a territory which splintered away after a bloody war of independence in 1971. 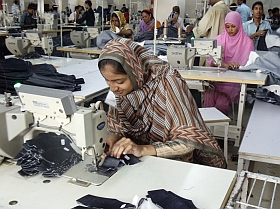 Garment factories, like this one in Karachi, are among Pakistan's major employers. Credit: Zofeen Ebrahim/IPS

“We have not moved (to Bangladesh), we have expanded there,” says Salamat Tauseef, president of the All-Pakistan Hosiery Association.

Since 2007, his company, Tauseef Enterprises, has been running a garments factory in Bangladesh with investments worth 12 million dollars and employing 3,000 Bangladeshis.

Tauseef says he would have loved to expand his business in Pakistan now that his son, 27-year-old Raheel Salamat, has joined the business; but the country “just does not seem conducive.”

In fact, Tauseef believes that Pakistan’s garments and hosiery industry is “breathing its last,” not only because of rising security issues but also because of serious power problems in the main textile hub of Faisalabad.

Last year, Faisalabad, often called the ‘Manchester of Pakistan’ for its extensive textile industry, did not get adequate gas supplies for 122 days with failures extending to eight hours on each of those days, said Tauseef.

Formerly known as Lyallpur, Faisalabad, located in the Punjab province, is Pakistan’s third largest city with an estimated population of 3.2 million people.

Faisalabad’s importance depends greatly on the textile industry, the mainstay of the country’s economy. Pakistan is the world’s fourth largest producer of cotton, sixth largest importer of raw cotton, and also the biggest exporter of cotton yarn.

According to Yasin Siddiq, spokesman for the All-Pakistan Textile Mills Association, the national trade association, the textiles sector accounts for over 50 percent of total exports and around 38 percent of the manufacturing sector workforce, or 3.5 million workers.

Pakistan’s preeminence in the textile sector is now seriously being threatened by Bangladesh.

“Bangladesh is among the least developed countries and enjoys a tax-free export facility to the European Union (EU) and 10 other developed countries,” says Siddiq. “Pakistan, on the other hand, faces tariffs in the EU and U.S. markets.”

Salim Tabani, a Karachi-based garment manufacturer, says, “The government should appeal to the world community to give us a duty free status in line with Bangladesh.

“At the moment, a foreign buyer has to pay almost 10 percent duty on products he buys from Pakistan as opposed to nothing if he buys from Bangladesh. So why should he buy from me?” Tabani asks.

Bangladesh has a far better security environment than Pakistan.

Tauseef, who travels every other month to Dhaka, says, “Our top level buyers now do business with us from Bangladesh.” His buyers include brand names like Puma, Slazenger, Next and Zara.

“Our customers are not willing to travel to Pakistan,” says Tauseef. “The frequent adverse travel advisories from their missions here have not made things any easier.”

Bangladesh also boasts advantages such as uninterrupted power supply, a tax holiday for the first 10 years of operation and unbeatably low labour costs.

While the minimum daily wage set by the government is eight dollars, Tauseef says workers cannot be found for that rate. “We pay a minimum of 9.1 dollars to semi-skilled workers who idle half the day due to power outage. In Bangladesh, the minimum wage is four dollars.” Pakistan’s top officials not only deny that the textile industry is moving to Bangladesh but insist that conditions in this country are better than the competition.

“There is no flight of the textile industry to Bangladesh taking place,” Mirza Ikhtiar Baig, advisor to the prime minister on textiles, told IPS in an interview.

“They don’t have the raw material – no yarn, no cotton and not even fabrics, most of which is imported from us,” said Baig.

However, Javed Ahmed, a Karachi-based industrialist, said the government needed urgently to “come up with a comprehensive policy to salvage the textile industry.”

“The government could, for instance, appeal to the U.S. for tariff concessions,” said Ahmed. “We need trade, not aid to overcome the impact on Pakistan from the ‘war-on-terror’ and the floods that this country is reeling from.”

“Half our time is spent greasing the palms of greedy officials working in about two dozen government departments,” said Tauseef. “We should have a one-window operation so we can pay all the taxes that they charge us under different heads.”

Ahmed said the government should also do something about protecting industrialists from extortion by political parties and criminals in places like Karachi.