OURICURÍ, Brazil, Sep 14 2011 (IPS) - Violent clashes looked inevitable when some 1,500 desperately hungry peasants poured into this small Brazilian town. Riot police were staked out to prevent looting. It was the year 1993, and millions of people in Brazil’s impoverished semiarid Northeast had been forced to the brink of starvation by three years of drought. 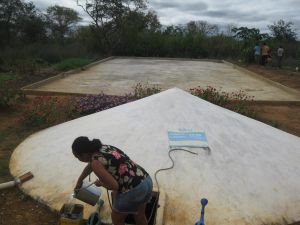 A rural woman in the Northeast takes water from a tank to irrigate her garden. Credit: Mario Osava/IPS

The rising death toll from the famine was pushing large numbers of rural people into towns and cities, where crowds of starving people were raiding warehouses and stores.

The government of then president Itamar Franco (1992-1995) was attempting to contain the waves of hungry people by distributing food aid and offering temporary work in emergency brigades.

“The people coming were ready to fight,” recalls Juvenal Ferraz, then president of the rural workers union of Ouricurí, a municipality in the northeastern state of Pernambuco where the population was 70 percent rural, compared to a national average of 25 percent.

“The only alternative” that occurred to Ferraz to prevent violence was to accompany the protesters during the three days that they occupied the streets in front of the union, the court house and the city hall, “urging them to stay calm,” while he also held talks with the police, “asking them for comprehension.”

He managed to find the protesters shelter in a large old house, where they stayed another three days, and were fed, while he helped negotiate an agreement for them to join an emergency brigade that would clean the local water wheels used to pump water from rivers for household use and crop irrigation.

The arrangements eased the tension, and the peasants went home.

Repeated climate-related tragedies in the Northeast, Brazil’s poorest region, and the failure of public works policies aimed at combating drought, such as the construction of dams, roads and irrigation systems, made the search for new solutions urgent.

An effective alternative began to be implemented just a decade later. Articulação no Semi-Árido Brasileiro (ASA), a network of over 700 NGOs, labour unions and community and religious institutions focused on Brazil’s semiarid region, adopted the goal of finding a way to “coexist” with the semiarid environment, by building rainwater tanks and finding other ways of storing rainwater on small family farms and community institutions like schools.

For its part, the government of Luiz Inácio Lula da Silva (2003-2011) launched a massive project in the name of fighting drought, in 2007, involving the diversion of water from the São Francisco river, one of the country’s largest, which rises in central Brazil.

The water diverted from the river would cross over 2,100 km in four of the nine states of the northeast, supplying 30 reservoirs and providing a year-round water flow in rivers that currently run dry during part of the year.

The project is to benefit 12 million people living in 390 municipalities in the states of Pernambuco, Paraiba, Rio Grande do Norte and Ceará, which are the hardest hit by drought, ensuring supplies to several large cities and hundreds of small and medium-sized towns, according to the Ministry of National Integration, which is in charge of the initiative.

In response to criticism of the environmental impact of the project, the government argues that it will permit better management of water resources in the Northeast and will drive economic development in the interior of the region, diverting just 1.4 percent of the flow of the São Francisco river.

But the situation in the Northeast has already improved. Small farmers and rural workers are no longer so vulnerable to drought, Ferraz said. Although in many areas, last year’s drought was worse than the one in 1993, there was no famine and starvation, he pointed out.

He said this is due to the social programmes developed by the Lula administration and continued by the government of Dilma Rousseff, such as Bolsa Familia, which provides assistance to 13 million poor families, half of whom are in the Northeast.

And it is also a result of the rainwater storage techniques that are now widely used, Ferraz added. “The hunger has disappeared, it’s no longer constant,” he said.

As of late July, the One Million Rural Water Tanks Programme (P1MC), launched by ASA in 2003, had benefited 351,140 families with the new system, which collects rainwater from their rooftops in 16,000-litre tanks made of pre-fabricated cement slabs. The water is potable and can be used for drinking and cooking.

More than half a million tanks have been built so far, with support from the national government, local governments and other institutions, said Paulo Pedro de Carvalho, general coordinator of Caatinga, an NGO based in Ouricurí that is dedicated to sustainable rural development in the area around the Meseta de Araripe in the west of Pernambuco state.

Caatinga “did a great deal to help overcome” the 1993 crisis in Ouricurí, said Ferraz who, “without leaving the labour movement,” joined the NGO later to distribute rainwater tanks.

Lately, the NGO has focused on bringing rainwater tanks to schools, to ensure drinking water supplies for students and educate them about water issues and the realities of living in a semiarid region.

“I have seen many children crying of thirst and mothers who don’t have water for cooking,” Ferraz said.

He added that many people in the region did not believe the rainwater tanks would be a real solution, until they began to see how much the tanks improved the lives of local families.

“It’s a pity that governments haven’t supported the programme as much as we would like,” he said.

The national government has financed nearly three-quarters of the tanks built by ASA, through the Ministry of Social Development. But much more funding would have been needed to reach the goal of one million tanks in five years, by 2008.

P1MC coordinator Jean Carlos Medeiros said it was a mystery that Lula had not fully embraced ASA’s programme, particularly given the fact that he was born into a poor family in the Northeast , who migrated to São Paulo when he was a child, fleeing poverty and drought.

Lula adopted many anti-poverty policies, which especially benefited people in the Northeast. But with regard to water supplies, he put a priority on the project to rechannel the São Francisco river, an idea that had been discussed since the 19th century but only got off the ground due to Lula’s determined support.

The project will cost over four billion dollars, the Ministry of National Integration reported in August, acknowledging that costs had gone 35 percent over the initial projection. The work is also moving ahead slowly, with some portions actually at a standstill. And instead of being completed by 2010, as initially scheduled, it will not be ready until 2014 at the earliest.

“It’s a setback in terms of coexisting with semiarid conditions,” the strategy recognised today as the route towards an effective solution to the social problems of the Northeast, said Alba Cavalcanti, assistant coordinator of another ASA programme, which collects rainwater for irrigation of vegetable gardens.

Critics of the project to divert the São Francisco river point to the inevitable impact on the environment caused by the construction of over 700 km of canals, aqueducts and tunnels, 30 dams, and nine water pumping stations.

But the enormous infrastructure project may not benefit the scattered rural population, who bear the brunt of the periodic droughts, and in the past saw the exodus to urban areas as the only solution.

“Coexisting with semiarid conditions is more than having water; it also involves valuing the land, being proud to be a ‘nordestino’ (northeasterner), feeling ‘capable of living on my land’ and not feeling inferior,” Cavalcanti said.