MONTREAL, Canada, Sep 13 2011 (IPS) - With its coffers largely dry and its management being contested, the Green Climate Fund (GCF) remains a hot topic among African civil society. Ahead of the upcoming international climate change meeting in South Africa, African ministers have already met to set their agenda and civil society is looking to do the same. 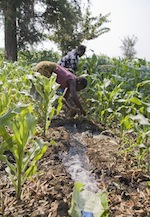 African women farmers are the overwhelming majority of farmers on the continent and civil society would like them to benefit from the GCF. Credit: Kristin Palitza/IPS

South Africa, which will host the 17th Conference of the Parties to the United Nations Framework Convention on Climate Change (COP 17) Nov. 28-Dec. 9, has convened meetings with African ministers to cement the continent’s demands ahead of the meeting.

On the minds of many will be the future design of the Green Climate Fund, which was created at COP 15 in Copenhagen, Denmark as a way to finance mitigation, adaptation, technology and capacity building in response to climate change

At the subsequent COP 16 meeting in Cancun, Mexico countries pledged 30 billion dollars in funding for 2010-2012, which would then increase to more than three times that amount annually from 2020 with funding from possible sources including international taxes on air flight, trade or financial transactions.

However, according to figures presented at the annual international civil society meeting, the CIVICUS World Assembly this week in Montreal, the U.N. has only received 12 billion dollars thus far.

In an effort to develop a civil society position on the fund ahead of COP 17, World Assembly delegates from East and Southern Africa as well as small island states met and identified key components that they said would have to be included in the fund’s architecture to allow their countries to benefit. The list of demands include balancing funding for mitigation and adaptation, making the fund easier to access for civil society and governments, as well as including civil society representation on the fund’s board.

At a session dedicated to the fund, civil society criticised donors for what it calls a funding bias for climate change mitigation programming that focuses on reducing greenhouse gas emissions and does not address the needs of many developing countries who are already low emitters.

“Mitigation is important but for us in the Pacific, there is very little else we can do to reduce gas emissions,” said Emele Duituturaga, executive director of the Pacific Islands Association of Non- Governmental Organisations. “A lot of our reality is around adaptation and there needs to be more balance between (this and mitigation).”

According to Vitalice Meja of the Reality of Aid Africa Network, this focus also came at the expense of African farmers who were in urgent need of adaptation support in order to cope with the changes they were already seeing in their fields.

This support, he added, should draw on local knowledge.

Duituturaga added that technology already transferred from the developed world, even solar panels, remain prohibitively expensive and can cost up to 7,000 dollars in her native Fiji.

Change is not the only thing civil society has not seen; it also has not seen much of the money dedicated to climate change, Duituturaga added.

“We have significant obstacles in getting our hands on the money,” she said. “Year after year, a lot of money is spent sending people to these negotiations to talk about more money but we still don’t see it. While the world negotiates and negotiates, we are having to suffer and adapt to climate change now and that’s unjust.”

Getting money on the table at COP 17 is an urgent priority for World Assembly participants.

It should also be accessible not only to governments but also to civil society and regional trusts, which groups of countries are likely to use to share the administration costs and reporting burden likely to accompany the grants, Duituturaga added.

Extremely vulnerable countries, such as small islands and conflict states should also be prioritised and allowed to apply for funding during dedicated window periods, Meja said.

Thinking outside the aid box

Its history of neoliberalism has made the fund’s current steward, the World Bank, an unpopular choice. Developing country governments, regional organisations such as the African Union, and civil society are anxious to hear about alternative architectures that will speed up the fund’s transition away from the international financial institution.

Anthony Tujan, co-chair of the international aid effectiveness organisation BetterAid said the GCF should adhere to aid effectiveness principles, including consultation with intended grant beneficiaries and the inclusion of a broad range of sectors in high-level decision-making – including civil society.

He also advocated for grants to be awarded to national or regional trusts.

“Vertical funds are very bad because they aren’t managed in a multi-stakeholder fashion and many are not transparent and our managed by a combination of governments, U.N. agencies and donors,” said Tujan, who is also director of IBON International, an international civil society strengthening organisation.

“To have a multi-stakeholder approach, you need civil society and (national) parliaments on the governing boards as equals.”