PORT SALUT, Sep 7 2011 (IPS) - Seventeen-year-old Rose Mina Joseph says she is nine months pregnant. Her belly is swollen and she moves slowly, placing each step, as she walks around her family’s dusty yard. 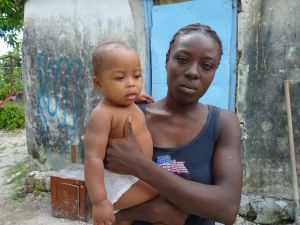 Nerlande Nazaire says she has a child with a U.N. peacekeeper, who sends money regularly. Credit: Ansel Herz/IPS

The father, she says, is a Uruguayan soldier from the local U.N. peacekeeping battalion named Julio. She holds up a photo of him smiling and embracing her at her seventeenth birthday party, on Jan. 8 this year. IPS verified her birth date by looking at her birth certificate.

Joseph says that five days after her birthday, she became pregnant with the soldier’s child. “Nowadays, sometimes I feel anemic,” she told IPS. “I’m afraid I won’t have the money to pay the hospital when I give birth.”

A copy of a wire transfer receipt shows that Julio Cesar Posse Juncal sent her 150 dollars from Montevideo, Uruguay on Jul. 15. Joseph complained that he hadn’t sent more money for her in August.

“Sexual relations with minors (under 18 years old), whether consensual or not, are deemed to be sexual abuse and, therefore, prohibited,” acting Deputy Spokesperson for the United Nations Secretary-General Eduardo del Buey said in a briefing Wednesday following a question by IPS about the allegations.

There are other allegations against the U.N. troops in this quiet seaside town, known in Haiti for its picturesque sandy beaches and quiet atmosphere. Sprawling piles of discarded imported goods, which local Haitians say are from the U.N. troops, remain dumped in public spaces along a beach.

IPS observed foul-smelling fluids passing through white pipes above- and below-ground alongside a dirt road that leads to one of the U.N. bases.

On Monday evening, local residents pulled back the cover of a manhole, revealing greenish fluids passing through a trench and into a larger pipe, which leads under a road and comes out on the other side on a beach.

There, a large yellow and green-coloured pool has amassed. The stench is so bad at times that passing drivers can smell it.

Sinal Bertrand, the parliamentary deputy representing Port Salut, said he raised the issue with MINUSTAH last month but no action has been taken yet.


He did not address Joseph’s specific case. A U.N. peacekeeping mission spokesperson in Haiti said they are investigating all accusations of misconduct in Port Salut. She did not elaborate.

Under Haitian law, an individual must be 18 years old to give sexual consent.

“If she needs something, the blan should help her,” said Antonia Zamor, Rose Mina’s mother, using the Haitian word for foreigner.

“It’s not legal… But he made her pregnant already. It’s not my fault – it’s the blan’s fault,” Zamor said. “He sent a small amount of money, but it’s not a lot. She told him she’s going to give birth, and he told her he didn’t know if he would send money.”

There are other women in Port Salut who have had children with the Uruguayan soldiers, despite a 2003 directive from the U.N. secretary- general to peacekeepers saying that, “Sexual relationships between United Nations staff and beneficiaries of assistance, since they are based on inherently unequal power dynamics, undermine the credibility and integrity of the work of the United Nations and are strongly discouraged.”

“When you talk about consent or consensual, it is somewhat ambiguous,” he told IPS, adding that the peacekeeper is in a position of power and money, so a relationship between a male peacekeeper and a local woman will almost always be imbalanced.

Light-skinned and bright-eyed, two-year-old Sasha Francesca Barrios coughs repeatedly as she sits on Roseleine Duperval’s lap at their home closer to downtown Port Salut. Duperval, her 32-year-old mother, said she has a fever.

The baby is named after the father, a former U.N. peacekeeper who once brought Duperval to Uruguay with him. She showed IPS her passport, which was stamped by the Uruguayan government. When Duperval returned to Haiti with him, she became pregnant. She is unsure if he was still serving as a peacekeeper at that time.

But he left after three months, she said, and she’s never heard from him again. The girl’s birth certificate identifies the father as Santiago Barrios. “We had a relationship and loved each other. I was working here, he was working here,” she said.

After he left for Uruguay, “He’s never taken responsibility,” Duperval told IPS. “He said when he left he would send money for the child, but he’s never sent anything. He’s never called.”

“We have too many MINUSTAH [troops] here,” she continued, referring to the peacekeeping mission by its acronym. “That’s all they do – make girls pregnant and then they leave. This is the worst thing they do… Now the child is going to reach the age where she needs to attend school, but I don’t know how I’ll pay for it.”

Duperval and her sister both attended a protest Monday held by about 300 people against the United Nations peacekeeping mission outside the base. The crowd held aloft a banner reading, “Justice for Johnny Jean”, the 18-year-old man allegedly raped by U.N. soldiers in Port Salut in a cell phone video that emerged last week.

IPS spoke to a third woman, 22-year-old Nerlande Nazaire, who lives near one of the Uruguayan U.N. bases. She laughs as six-month-old, light-skinned straight-haired Robert Outhele bobs excitedly up and down her lap. The baby’s arms are dotted with mosquito bites that have formed reddish bumps.

Nazaire said she struck up a relationship with a soldier when he passed by her house one day. She said she had spoken with him as recently as last Saturday and she’s happy that he sends money regularly for the baby.

Residents of Port Salut interviewed during the past week gave varying estimates of the number of children with Uruguayan fathers in the city, ranging from five to more than 10.

Joseph, the 17-year-old girl, said a doctor told her she would give birth to a baby boy on Sep. 20.

Mario Joseph (no relation), a prominent Haitian lawyer, told IPS, “In Haiti, one is a minor until age 18. That means that if a foreign soldier has sex with a minor, he is breaking Haitian law and the Haitian judicial system should judge him.”

Joseph and a human rights jurist told IPS that under Haitian law, if found guilty, the perpetrator would be sentenced to roughly 10-15 years of forced labour.

But under an agreement between MINUSTAH and the Haitian government, U.N. troops have immunity from the Haitian justice system and are supposed to be tried for transgressions in their home countries.

Five Uruguayan soldiers allegedly involved in the abuse of Jean, caught on video, have reportedly been repatriated. El Pais reports that Uruguayan President Jose Mujica has sent a letter to the Haitian government apologising for the abuse and pledging reparations to the victim’s family.

Standing outside her home, Dorothy Lebon, a schoolteacher at L’Ecole National de Point Sab, said that 17-year-old Rose Mina Joseph is her student.

“It’s a sexual abuse that they need to correct in the justice system. The woman who’s pregnant is a student, who’s less than 18,” she said. “If they want to change their programme – build schools, provide healthcare, create roads – we wouldn’t have a problem. But they don’t do anything positive.”

Many residents of Port Salut told IPS that minors have regularly engaged in sex with MINUSTAH troops. Several families in a poor neighbourhood adjacent to a Uruguayan U.N. base, insisting they remain anonymous, gave IPS the same story: young girls, including 16- and 17- year-olds, enter the base at midnight or later and have sex with the soldiers.

IPS could not confirm the allegations as of press time.

“We are taking these allegations with the utmost seriousness, as seriously as we have been,” Eliane Nabaa, a MINUSTAH spokeswoman, told IPS. She said she could neither confirm nor deny that troops in Port Salut have been having sex with juveniles.

*Ansel Herz is a freelance reporter who blogs at http://mediahacker.org.

With additional reporting by Elizabeth Whitman at the United Nations.