KFAR JOZ, South Lebanon , Sep 11 2011 (IPS) - Even in the summer heat, the hills of South Lebanon are an impressive sight – a patchwork of green, brown and red fields interrupted only by sleepy villages, rock formations and dirt tracks. 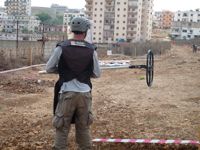 Most residents here have traditionally depended on agriculture to provide for their families. But instead of sowing crops or herding their flocks through the grassy terrain, for the last five years locals have viewed the surrounding hills with caution. Lurking in these fields are hundreds of thousands of cluster munitions, silently waiting to claim their next victim.

“Every day we find cluster bombs in between the houses and in the fields,” says Ali Shuaib, community liaison manager at the Mines Advisory Group, a British non-governmental organisation clearing landmines and other remnants of war in Lebanon. “There are tens of villages like this all over the South.”

Although Lebanon has been plagued by landmines since its 1975-1990 civil war and subsequent Israeli occupation, it faced unprecedented contamination levels from cluster munitions after Israel launched a 34-day war in July 2006. According to Human Rights Watch, Israel’s use of the weapons was the most extensive anywhere in the world since the 1991 Gulf War.

In the last 72 hours of fighting, at a time when the United Nations Security Council had adopted Resolution 1701 calling for an immediate halt to hostilities, Israel dropped more than four million cluster bombs over South Lebanon. Of those, at least forty percent failed to explode upon impact, according to the UN, becoming de facto landmines across Lebanon’s agricultural heartland.

These are the most indiscriminate weapons of modern warfare; 95 percent of all victims of cluster munitions are civilians, according to the NGO Handicap International. Since the cessation of hostilities five years ago, 408 Lebanese civilians have been killed or injured by cluster munitions, 115 of them under 18 years old. Unless properly disposed of, the weapons keep killing and maiming for decades.

Cluster munitions continue to wreak havoc on the Lebanese economy, too. With an estimated 36 percent of contaminated land being used for agricultural purposes, the already deprived South Lebanon has lost hundreds of millions of dollars in income, says Major Pierre Bou Maroun, chief of the Lebanese Armed Forces’ Regional Mine Action Centre in Nabatieh, which oversees all demining operations in the country. In 2007 alone, Lebanon lost an estimated 126.8 million dollars in agricultural revenue because of cluster munitions.

Israel’s use of the weapon in Lebanon helped galvanise an international ban in May 2007, when 107 countries voted for the UN Convention on Cluster Munitions. The convention prohibits the use, production, stockpiling and transfer of all forms of cluster munitions. It also requires countries to clear contaminated areas within 10 years, destroy supplies within eight years and provide assistance to victims.

Lebanon was among the first countries to sign the convention in December 2008 and although it only entered into force in May this year, officials have been keen to take an international leadership role on its implementation. This week Beirut hosts the second international meeting of states parties to the Convention. Delegates from over 110 governments, UN and other international organisations will attend the week-long conference along with survivors of cluster munitions to discuss how to further advance the Convention’s obligations.

The meeting “is a golden opportunity for Lebanon,” says Haboubba Aoun, one of Lebanon’s representative members of the Cluster Munition Coalition and International Campaign to Ban Landmines, and a member of Lebanon’s National Committees on Risk Education and Victim Assistance. “We hope the people of the world will take a closer look at the cluster bomb problem in Lebanon and decide to continue supporting clearance activities and victim assistance activities.”

Clearance teams have made formidable progress in Lebanon despite almost continuous funding concerns. “We have 2,259 well-known minefields” in addition to thousands of other contaminated areas, says Bou Maroun. Some 1,578 minefields have been now been cleared and returned to residents, but 22 million square metres of contaminated land remains. This figure does not include heavily contaminated areas along the so-called Blue Line border area between Lebanon and Israel, whose clearance has been left to the UN peacekeeping force UNIFIL.

“Our vision is a Lebanon free from cluster bombs, land mines and explosive remnants of war,” Bou Maroun tells IPS. With sufficient funding and support, he says Lebanon could be cleared of cluster munitions by 2016.

Following international pressure, Israel provided the Lebanese Armed Forces (LAF) with maps showing the areas it targeted with cluster munitions. But, says Bou Maroun, as these maps do not show the coordinates of those targets, they are merely “papers for the trash”.

Mine clearance is painstakingly slow and dangerous work. Deminers sent to the field must abide by strict regulations and are flanked by ambulance and medics. “It’s a calculated risk,” says Daniel Redelinghuys, MAG’s Technical Operations Manager. Two MAG deminers have lost their lives and 18 have been injured in the five years since hostilities ceased, he adds. The LAF and other clearance organisations have also experienced considerable losses.

Yet the possibility of an accident doesn’t deter Hussein Tabaja, a mine clearance site supervisor with MAG. “You’re working for your country,” he says with a shrug. “When you see the faces of people after you have cleared their land, you see how many people you have helped, who can go back and use their fields again, it makes you happy. Sometimes during the holidays I actually miss coming to work.”

While there is growing international support for a universal ban, there remains staunch opposition from the world’s biggest producers, traders or users of cluster munitions, such as Israel, China and the U.S., who have not signed the Convention. As recently as late August, Handicap International censured Israel for laying fresh landmines along the border of the occupied Syrian Golan Heights.

And for many, any international ban will come too late. “I wish I could change my leg and get a new one,” says 12-year-old Mohammad Abd al-Aal, who has been left with a prosthetic leg after stepping on a cluster bomblet while herding his family’s goats.