LUJÁN DE CUYO, Argentina, Oct 19 2011 (IPS) - Even slight changes in temperature can have a serious impact on the quality of wine, whose production is closely intertwined with the particular qualities of local soils and microclimates. 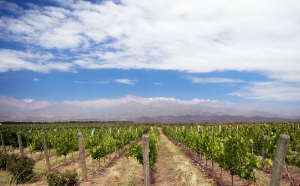 In the province of Mendoza, tucked up against the Andes Mountains in western Argentina, vineyards and wineries are already taking steps to gain a greater understanding – and reap the benefits, if possible – of the future effects of climate change.

We are in the dry, mountainous Cuyo region, South America’s leading wine-producing region in terms of both the area of land devoted to vineyards and the volume of wine produced.

“There are indications that certain changes are taking place in temperatures as well as rainfall patterns, and this could affect the quality of wines,” Mendoza-based agronomist Martín Cavagnaro told Tierramérica.

It is the province’s winemakers who are most anxious to promote the development of knowledge for adaptation to climate change, commented Cavagnaro, coordinator of the newly founded Argentine Intersectoral Forum for Sustainable Viniculture (Flavis), which brings together wineries, scientists, government institutions and civil society.

The baseline climate determines the type of wine that can be produced in a particular region. And climate variability leads to differences in the quality of grapes from one harvest to another.

Climate change can influence both the baseline climate and its variability, and as a result, it can “produce changes in the personality of regional wines,” according to a study published in 2009 by the consulting firm PricewaterhouseCoopers (PwC), “Efectos del Cambio Climático sobre la Industria Vitivinícola de Argentina y Chile” (Effects of Climate Change on the Wine Industry in Argentina and Chile).

In the South American wine-producing region that stretches across both sides of the Andes mountain range, the minimum temperature in 2050 will be one degree higher than today, while precipitation will continue decreasing, predicts the study, based on the A2 and B2 scenarios developed by the Intergovernmental Panel on Climate Change.

Most of the region’s rivers will have reduced flows, which will lead to a greater need for irrigation than at present, and there could be stronger winds in some areas.

Each variety of grape is best suited to certain climate areas, such as the case of the Malbec variety in the Cuyo region.

“The temperature and other physical soil conditions have a direct influence during maturation,” notes the PwC study.

If temperatures are very cold, the grapes will not have the necessary concentration of sugar, and will produce a wine that lacks in aroma and colour and is overly acidic. If it is too hot, the problems will be reversed.

In Luján de Cuyo, 18 km from the provincial capital of Mendoza, Malbec is the leading variety of grape grown and has earned the region international renown. The landscape is dominated by vineyards with their orderly rows of plants. Some have their own wineries, like the famous Bodega Norton, founded in 1895, which exports to over 60 countries.

Norton owns 1,200 hectares of vineyards and produces some 120,000 hectolitres of different varieties of wine annually, combining the artisanal touch of oak barrels with modern stainless steel tanks that allow for precise temperature control.

With an annual production of 16.3 hectolitres, Argentina is the world’s fifth largest wine producer. It ranks ninth in terms of the surface area of vineyards and eighth in the volume of grapes produced, according to statistics from the International Organisation of Wine and Vine for the year 2010.

While the impacts of global warming will not affect all grapes and grape-growing areas in the same way, they could determine “the future viability of a region for the production of a certain variety of grape which is currently exploited,” says the PwC study. Or vice versa.

“We know that there are varieties which formerly did not adapt to the climate and which now, with the increase in temperature, could produce good yields, which is why we believe that the viniculture frontier could be expanded,” explained Cavagnaro.

And it is already expanding. A 20-hectare vineyard is surviving and flourishing in the cold southern province of Chubut. “This was inconceivable in the past,” he said.

But every corner of the changeable geography of the Andes and Cuyo regions has its own particular microclimate and soil, as well as particular grape varieties that grow best there. And for the moment it is impossible to develop future climate models with the same degree of precision.

For Cavagnaro, the PwC study encompasses an overly large region.

Pablo Minatelli, an agronomist at Bodega Norton, agrees. “The geographic scale of the models is enormous in relation to the valleys and vineyards. There is a high degree of uncertainty,” he told Tierramérica. The creation of Fiavis is an attempt to “expand our knowledge of these variables.”

“It will help to highlight problems that are currently hidden or unknown, and to try to avoid them,” he added.

Creating and disseminating knowledge is the first and most critical adaptation measure. Optimising the use of water and soil, modernising planting techniques, moving certain varieties to higher and colder regions, replacing others and drawing on the possibilities offered by genetic improvement are other recommended strategies.

In fact, global warming is causing alterations in other wine-producing regions of the world, and in Australia, New Zealand and Chile, new genetic varieties are being developed that can better adapt to drought conditions without affecting quality, stressed Cavagnaro.

Fiavis will also contribute to obtaining financing for research and the exchange of experiences concerning other export requirements, such as reducing the carbon and water footprints of the wine industry.

In addition, Fiavis will not concentrate exclusively on Mendoza, where the main vineyards are located, but will also include other areas where wine is produced, such as Salta, in northern Argentina, and Río Negro in the south. Viniculture is in fact practiced in a total of 12 provinces of Argentina.

“We want to sensitise producers to the benefits of sustainable development, and formulate a strategic plan for 2020 that encompasses all of the country’s wine-producing regions,” said Cavagnaro.

To develop the necessary climate projections, Fiavis will be assisted by the Argentine Institute for Snow Research, Glaciology and Environmental Sciences, which studies the behavior of Andean glaciers.

Irrigation in the Cuyo region depends on water from the melting of high mountain snow and glaciers, which is another reason why global warming is a key concern in the area. Mendoza was the first province in Argentina to create a government agency devoted exclusively to studying the impacts of climate change.