CHANGWON, Oct 16 2011 (IPS) - “Humanity is the only desert-making species and we’ve been degrading usable land at one percent per year,” says Luc Gnacadja, executive secretary of United Nations Convention to Combat Desertification (UNCCD). 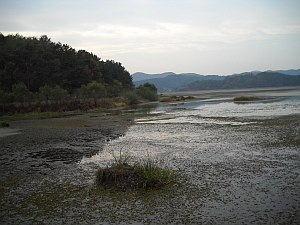 “For the sake of life we must build a land degradation-neutral life,” said Gnacadja at a press briefing on Sunday in this South Korean city where most of the 194 signatory countries to the Convention are meeting for the 10th Conference of the Parties (COP) from Oct. 10 – 21.

Gnacadja did not mince words in bringing home the idea that a crisis building up from desertification, land degradation and drought (DLDD) is already impacting more than two billion people, calling for urgent prevention measures.

“Land degradation is the missing link to sustainable development, land degradation costs 11 percent of global GDP today,” said Gnacadja. “If it makes sense to the world today to be carbon neutral, in not striving for a degradation-neutral land are we not being senseless?” he asks.

Gnacadja’s sense of urgency stems from grim UNCCD figures that forecast a 12 percent dip in food production in the next 25 years and an increase of up to 30 percent in food prices. Worst hit will be 80 percent of small farmers. Some 925 million people may go hungry.

Globally, 2.6 billion people’s livelihoods depend directly on agriculture which gets impacted as 52 percent of agricultural land is degraded in varying degrees. While 24 billion tonnes of fertile soil disappear each year due to soil erosion and other factors, 12 million hectares are lost to drought and desertification – land which can produce 20 million tonnes of grain.

“Some 42 percent of the world’s poor depend on degraded lands for nutrition and income,” said Ephraim Nkonya of the International Food Policy Research Institute, Washington. “With such a large portion of the world’s land and population affected, the cost of land-based ecosystems’ degradation could amount to 66 billion dollars per year.”

UNCCD and South Korea are expected to propose the ‘Changwon Initiative’, that includes action plans to accord priority to reforestation of dry lands, important in Asia where people are affected more by land degradation than on other continents.

In South Asia, where the majority of populations depend on agriculture and livestock, land and water already under tremendous pressure and agricultural practices continue to be unscientific, adding to difficulties in combating land degradation.

“India, with a burgeoning, high resource-dependent population on land that is 32 percent degraded and 24 percent more – or 82 million hectares – in the process of being degraded, is according high priority to sustainable land and ecosystem management,” Brij Mohan Singh Rathore, joint secretary in India’s ministry of environment and forests, told IPS.

Rathore said India’s 12th Five-Year Plan (2012-2017) takes note of the fact that natural dry lands – a fragile ecosystem that often cannot withstand even one climatic crisis – account for 69 percent of the land and are home to the poorest of the 25 percent people who live on less than 1.25 dollars a day.

“Land holdings and community commons are shrinking. The alarming over-exploitation is self evident in grazing land to livestock ratio which should ideally be 1:1, but is 1:9 (a cow is the accepted unit, a buffalo makes two units, a goat or sheep less than an unit),” Rathore explained.

“Desertification is the outcome of various complex factors.To counter it we must ensure efficient convergence on many levels – policy, institutional and geographic. In India where geographical and social variables abound, ensuring decentralisation is crucial – allowing communities to take decisions on what is best suited to local needs,” says Rathore.

Warapong Waramit, focal point for Thailand to UNCCD, says that his government recognised the importance of sustainable land use 50 years back when it set up the land development department, where he officiates and which oversees soil fertility and land use planning.

“Even though Thailand spends around 100 million dollars annually (on prevention measures), reduced agricultural productivity, soil salinity and droughts are challenges we are still faced with, though success cases too exist,” Waramit told IPS.

“The absence of uncontested acknowledgment of climatic change – whether it is here to stay or is a temporary climate aberration makes policy formulation difficult and adds to the challenges of addressing land degradation and desertification,” he added.

Civil society organisation (CSO) representatives at COP10 emphasise that knowledge sharing is a crucial tool in combating desertification and have been demanding strengthened participation of CSOs in all aspects of DLDD.

“There needs to be better interaction between CSOs and respective governments; CSOs are closest to the problems faced by people, know their concerns,” said a delegate from Argentina, Friday, at an open dialogue session titled ‘Inclusion of activities of NGOs within the official programme of work of COP’.

While delegates expect the conference to arrive at a consensus on scientifically defining the size and the costs of DLDD that each party will adopt, Gnacadja said at the outset that a methodology of monitoring land degradation would be the key topic of discussion at COP10.

A consensus on standards in measuring loss of soil nutrients has hampered global efforts to tackle the problem with investors and donors unable to monitor the impact of funding. “Whenever we say land degradation is a problem, scientists contest it,” Gnacadja said at a session on Thursday.

The UNCCD, created in 1997 to combat desertification, is the world’s only legally binding convention.