MÁLAGA, Spain, Oct 24 2011 (IPS) - “It was very tough, like being in prison,” says 29-year-old Algerian immigrant Sid Hamed Bouziane, in slow Spanish, about his 28-day stay at the Immigrant Detention Centre, or CIE, in the southern Spanish city of Málaga. 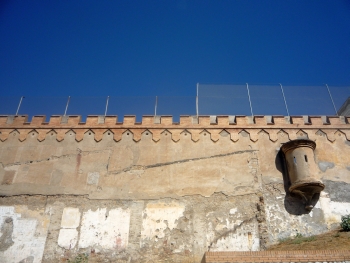 The wall of a former barracks serving as an Immigrant Detention Centre in Málaga. Credit: Inés Benítez/IPS

The Málaga CIE, established in 1990 in a former military barracks in the rundown neighbourhood of Capuchinos, is one of nine Spanish centres created to hold undocumented immigrants.

CIEs are defined in the country’s immigration laws as non-correctional public facilities under the interior ministry, for detention in custody, at the behest of the justice authorities, of foreigners subject to deportation proceedings.

Social organisations, experts and institutions have repeatedly reported violations of human rights in the detention centres.

“They are prisons in disguise,” Luis Pernía, president of the Platform for Solidarity with Immigrants in Málaga, told IPS. There is a “lack of democracy, legality and humanity” in these centres, which “exist only to justify the European Union’s hypocritical migration policies,” he argued.

In December 2009, a report titled “Situación de los Centros de Internamiento para Extranjeros en España” (Situation in the Immigrant Detention Centres in Spain) by the Spanish Commission for Aid to Refugees (CEAR) reported serious issues involving living conditions and legal protection in CIEs in Málaga, Valencia and Madrid, and found cases of torture of inmates in the Madrid CIE.

“The very fact of locking someone up for having emigrated is unacceptable,” Salva Lacruz, in charge of CEAR’s lobbying programme, told IPS from the southeastern city of Valencia, where the First National Meeting of Groups Against CIEs was held Oct. 21-23.

The goal of the meeting, which attracted some 30 associations from around the country, was to coordinate a national campaign aimed at shutting down the CIEs.

The detention centres are “black holes in the rule of law” that form part of a “circuit” which begins with strict border controls that force immigrants to travel in appalling conditions, such as in dangerous sea crossings from the north coast of Africa., said Lacruz.

Bouziane, who received death threats in Algeria, fled aboard a small open boat to Spain in 2008. Afraid to apply for asylum because he lacked proof of his persecution in his own country, he remained undocumented until he was arrested and sent to the CIE in July.

But Bouziane’s deportation order was cancelled after a group of protesters belonging to the May 15 (15-M) movement, who call themselves the “indignados” (“indignant” or “angry” ones), demonstrated for 11 days to secure his release.

His lawyer, José Cosín, a member of 15-M, told IPS that the authorities are still carrying out “racist” raids on immigrants, in spite of the United Nations Committee for the Elimination of Racial Discrimination having urged the Spanish state in March to “take effective measures” to eradicate the practice of identity checks based on ethnic and racial profiling.

Foreigners found without documents are detained for up to 60 days, although their lack of papers is a minor offence equivalent to not carrying a driver’s licence when driving a car.

CIEs are not detention, but retention, centres: undocumented immigrants are confined there, not because they have broken any criminal laws, but as a precaution to ensure they can be deported.

“There is more legal insecurity in CIEs than in prisons,” said Rodríguez Candela, who believes it is essential to enact a comprehensive law to regulate the functioning of CIEs and the legal status of their inmates.

Although immigration laws stipulate that detainees must have a lawyer, hired privately or appointed by the state, 58 percent of CIE inmates do not know who is defending them, or do not have access to legal counsel, according to the CEAR report.

Detained immigrants are confined in barracks or old buildings without the most basic facilities to make them habitable. In Málaga the CIE is a former military barracks; in Algeciras in the extreme south of Spain, it is a prison that was because it was so rundown.

All aspects of CIEs, from security to health care and food, are controlled by the police, who manage and finance them. In prisons, on the other hand, the guards only carry out security duties.

Detention at CIEs can be avoided by alternative measures under the immigration laws, such as surrendering one’s passport or appearing before a judge once a week.

A total of 30,163 immigrants were deported in 2010, nearly 21 percent fewer than in 2009 when 38,129 people were expelled, according to the interior ministry’s annual statistics on the fight against illegal immigration.

“The building is damp, old, and not fit to house people. A prison would be better than this,” a doctor working at the Málaga CIE, who preferred to remain anonymous, told IPS.

This CIE has a chequered history and has already been closed twice for repairs.

There have been cases of “full-term pregnant women and people suffering from mental illness and depression” being interned, said Pernía. There is also a shortage of interpreters and social workers, according to the Platform for Solidarity with Immigrants in Málaga.

Xavier Torregrosa, a social worker with Valencia Welcomes and a CEAR volunteer in that eastern city, doubts the effectiveness of the CIEs. Studies show that no more than 30 percent of detained immigrants are eventually deported, which demonstrates that the spending on persecuting undocumented migrants is useless, he says.

The gap between the number of deportation orders issued and carried out is due to the government’s lack of resources to execute them, the inability to identify a person’s nationality in many cases, or the detention of immigrants from countries with which Spain does not have a repatriation pact.

Detainees who are not deported are released, but have a deportation order filed against them which prevents them from legalising their residence in Spain and leaves them “absolutely unprotected,” said Rodríguez Candela.

Andalusia ombudsman José Chamizo requested the closure of these centres in 2006, because “detainees are treated like criminals, and the centres are like prisons.”

“CIEs are a monster,” concluded Pernía. “They are a blind animal we have created and forced to walk.”