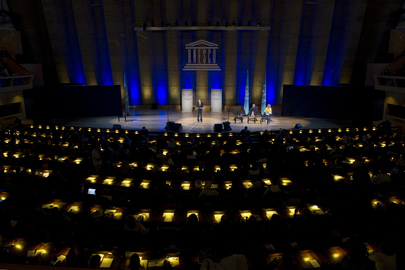 State Department spokesperson Victoria Nuland, who noted that Washington had been scheduled to pay 60 million dollars in dues to UNESCO next week, said the cut was required under legislation that bans U.S. contributions to the U.N. or any of its specialised agencies that grants Palestine membership as a state.

“Today’s vote by the member states of UNESCO to admit Palestine as a member is regrettable, premature and undermines our shared goal of a comprehensive, just and lasting peace in the Middle East,” she said, insisting that Washington still supports Palestinian statehood but only if it is “realised through direct negotiations” with Israel.

Those negotiations have been held up for more than a year as a result of Israel’s refusal to freeze its settlement expansion in the occupied territories of the West Bank and Gaza, as demanded by Palestinian Authority President Mahmoud Abbas.

Nuland also stressed Washington’s strong support for the Paris-based agency, noting that it “serves a wide range of our national interests on education, science, culture and communications issues” and that the U.S. “will maintain its membership in and commitment to UNESCO”.

The legislation banning U.S. funding to U.N. agencies that recognise Palestine as a state date back to the early 1990s, when it was still politically unacceptable for national political candidates here to voice support for what has become known as a "two- state solution" to the Israel- Palestinian conflict.

Not until 2002 did a sitting U.S. president, George W. Bush, explicitly endorse this outcome.

Unlike most legislation of their kind, the two relevant laws grant no authority to the president to waive its provision if it serves the "national interest", or even the "national-security interest".

State Department spokesperson Victory Nuland hinted that the administration will consult with Congress about ways it can continue to support UNESCO and other U.N. agencies that may also vote to admit Palestine.

The administration's WIPO- related meeting Monday suggested that it may try to enlist powerful business organisations and other lobby groups to help that effort.

Amending the law to provide for a presidential waiver would be one way of doing so.


But Washington could lose its vote in the agency if it fails to pay dues for two years, she noted. She also expressed concern that Monday’s vote could herald a “cascade” of similar votes in other U.N. specialised agencies that would require Washington to cut funding to them.

Despite heavy lobbying by U.S. diplomats, 107 nations voted in favour of Palestinian membership, while only 14 countries opposed it. Fifty-two countries abstained, while 21 states were absent. Admission as a new member requires a two-thirds majority vote by UNESCO’s General Conference.

Voting against Palestinian membership with the U.S. and Israel were Australia, Canada, the Czech Republic, Germany, Lithuania, the Netherlands, Sweden, Panama and a handful of South Pacific island- nations.

The European Union (EU), which has proved unable to unite around a common Middle East policy, was deeply split. In addition to those EU members voting against, Britain, Denmark, Portugal, and half a dozen Central European countries abstained, whereas Belgium, France, Spain, Finland, Austria, Slovenia, Greece, Cyprus and Ireland, voted for the resolution.

Both China and Russia, two of the five permanent Security Council members, also voted in favour, as did the rest of the so-called “BRICS” – Brazil, India, and South Africa – all the members of the Arab League, and several other emerging powers, notably Indonesia, Turkey and Nigeria.

The vote follows last month’s formal application by Abbas, acting as chairman of the Palestine Liberation Organisation (PLO), which represents Palestine diplomatically, to the U.N. Security Council for statehood status. The U.S. has threatened to veto the application, which is currently under study by U.N. technical experts, if and when it comes to a vote.

The U.S. currently funds about 22 percent of UNESCO’s budget, or about 80 million dollars per year. Withdrawing any portion of that amount could seriously affect the agency’s many operations.

Moreover, membership in UNESCO normally translates into automatic membership in several other U.N. agencies, including the World Intellectual Property Organisation (WIPO), the UN Conference on Trade and Development (UNCTAD) and the U.N. Industrial Development Organisation (UNIDO), as a result of reciprocity agreements between them.

Indeed, senior State Department officials and the U.S. Patent and Trademark Office met with representatives of several leading U.S. companies and business associations Monday to discuss the possible implications for their relations with WIPO, whose work forms much of the legal basis for protecting intellectual property rights around the world.

“If Palestine joins WIPO, the United States will have to pull out, limiting its ability to steer policies in ways that advance American economic interests and create jobs here at home.”

Given the margin of Monday’s vote, moreover, it looks almost certain that the Palestinians will be admitted to other specialised agencies, including some, such as the International Atomic Energy Agency (IAEA), that are important for U.S. national security, according to Wirth and other analysts.

The IAEA, among other things, carries out inspections of nuclear facilities in Iran, North Korea, and other signatories of the nuclear Non-Proliferation Treaty.

“Should the United States stop paying membership dues to the IAEA – which it could be forced to do under current legislation if Palestine is admitted as a member – the United States would give up our vote on the executive board,” Wirth wrote in a column published Monday by Huffington Post. “It would literally lose a seat at the table during the next nuclear crisis.”

“As long as these laws remain on the books, Congress is setting the stage for America’s waning influence over international affairs,” wrote Wirth, who called for businesses and non-government organisations to “take a stand and urge Congress to give the President the flexible authority needed (to) protect our national security and economic interests”.

But as Washington enters a presidential election year, the chances of the current congress, particularly its Republican House of Representatives, amending the legislation are “low to non-existent,” according to Lara Friedman, director of policy and government relations at Americans for Peace Now (APN), a Zionist peace group.

“Given what appears to be an overwhelming view in Congress that the Palestinian effort to gain legitimacy at the U.N. is tantamount to a new form of terrorism against Israel, it seems like that if (the current law) didn’t already exist, the 112th Congress would invent it.”

Indeed, the House Foreign Affairs Chair, Representative Ileana Ros-Lehtinen, has introduced her own legislation that would not only ban U.S. funding to any U.N. agency that grants statehood status to Palestine, but also eliminate all funding for the PA and the U.N. Relief and Works Agency, which aids Palestinian refugees, if Abbas continues seeking statehood status.

“Today’s reckless action by UNESCO is anti-Israel and anti-peace,” she said Monday, referring to the Palestinian bid as a “dangerous scheme to bypass negotiations with Israel”.

But APN said Monday’s vote should be “a wake-up call to Israel, the Obama administration, and the U.S. Congress”.

“The status quo – in which Israel continues to pursue policies that are anathema to the two-state solution and in which the Obama administration is unable or unwilling to exercise convincing leadership to restore credibility to its peace policy – will lead only to further isolation and marginalisation of both Israel and the United States in the international community,” the group warned.