CIUDAD GUAYANA, Venezuela, Oct 6 2011 (IPS) - Garbage pickers, emaciated dogs and carrion birds alike all hunt for items of value at the Cambalache garbage dump, before they have to give way to the smouldering fire that burns up to 900 tonnes of waste a day in the open air, spreading its smoke over Ciudad Guayana in northeastern Venezuela. 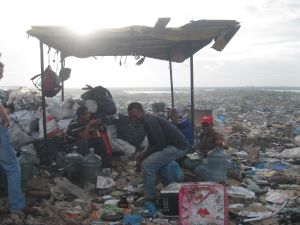 Barely a hundred metres away, toxic red mud, a byproduct of the refining industry which produces hundreds of thousands of tonnes of aluminium a year, is starting to seep into the waters of the mighty Orinoco river, which flows on the north side of Ciudad Guayana.

“I’ve been doing this for 15 years, and so have members of my family. Someone is always getting sick: we have to breathe the smoke day in, day out from sunup to sunset. Some children in the local area have died. And this work doesn’t pay a great deal, just enough to help the family scrape by, but there is no alternative,” Jesús González tells IPS as he takes a break from scouring the dump for scrap metal.

Ciudad Guayana was designed 50 years ago with the help of urban planners from the Massachusetts Institute of Technology (MIT) in the United States, when it was envisioned as the “Pittsburgh of the Tropics” after the Steel City in the U.S. state of Pennsylvania: that is, as a medium-sized modern urban development and a base for steel industries, related companies and hydroelectricity plants, in an environment rich in timber and precious minerals.

“We mainly collect iron, tin, aluminium, copper and bronze, as well as cardboard. I work with some Warao (indigenous people) and criollos (people of European descent), and we pile up our material in here,” said Nelly Guevara, a mother of three, sitting under a worn and flimsy canvas awning in the middle of the dump.

The closest industrial plant to Cambalache is the state Bauxilum factory, which processes nearly three million tonnes of bauxite a year, extracting 1.5 million tonnes a year of alumina (aluminium oxide), which is further processed into aluminium, and discards the rest as a sandy waste called red mud.

This red mud, with a high content of caustic soda and other chemicals used in alumina extraction, is dissolved in water and pumped into large lagoons located between Cambalache and the right bank of the Orinoco river.

A year ago in Ajka, Hungary, a reservoir of red mud burst its banks and spilled a million cubic metres of the toxic waste over an area of 40 square kilometres. Four people died, six went missing and 120 were injured.

Caustic soda (sodium hydroxide) is corrosive when inhaled, in contact with eyes or skin, or when ingested. It can cause skin burns, coughing, breathing difficulties, abdominal pain, diarrhoea and vomiting, and shock or collapse.

At Cambalache, according to the local media, the lagoons have not overflowed, but red mud has begun to seep from the reservoir walls and bottoms towards the Orinoco river and its natural floodplain lakes, which are periodically flooded in the rainy season.

They are the habitat of fish that are typical and important in the traditional local diet, such as laulao catfish (Brachyplatystoma vaillanti), zapoara (Semaprochilodus laticeps) and pirapatinga (Piaractus brachyporius), and the lake waters are used by the poorest communities for bathing, washing clothes and even cooking.


Guevara makes about 2,000 bolivars (460 dollars at the official exchange rate) a month, a little over the national minimum wage, by “arriving sometimes at five in the morning, and staying past seven o’clock at night, in the midst of the smoke, the insecurity, and the animals that pass on infections. Sometimes we are trapped by the rain, and we cannot leave,” she said.

Built on the confluence of the Orinoco and Caroní rivers, some 550 km southeast of Caracas, Ciudad Guayana grew out of an older depressed zone, San Félix, to the east, and a middle-class development, Puerto Ordaz, to the west, with shanty towns like Cambalache, home to 8,000 people, springing up on the outskirts.

Among the people of Cambalache are 120 Warao families, an ethnic group originating from the Orinoco river delta, some 100 km to the northeast. Groups of Warao people have intermittently split off from the main population in the delta, and now live as panhandlers in miserable conditions in a number of Venezuelan cities.

Ten Warao children died from gastrointestinal or respiratory diseases in and around Cambalache last year, according to accounts in the local press. Some were buried simply under a tree, without a coffin, because of the extreme poverty of their parents.

The garbage is brought to the dump site, which covers an area of a dozen hectares, mainly in old dumpster trucks, or in one of the city government’s few waste compaction vehicles, which tip their loads on to the smoking margins of the dump. Garbage pickers immediately congregate around the newly dumped waste to recover materials that other people will sort and classify.

The remains are left to the turkey vultures, dogs and swarms of flies, until the heat and smoke of the fire approach. When the wind is in the west, the smoke spreads like a toxic cloud over a large part of Ciudad Guayana, a city of 850,000.

Lung specialists from Ciudad Guayana, such as Judith Lezama, are concerned about the rise of illnesses like asthma and pneumonia, while Ligia Andrade, the spokeswoman for a local community council in Cambalache, says “the plague of flies contaminates everything, and children and adults get lung diseases, as well as skin and stomach diseases.”

What should be done with this dump, when the state Guayana Corporation, the regional development body, had already declared back in 2001 that its “useful life was exhausted”?

González does not want the garbage dump to be removed to a distant location, because he would lose his source of income. “Perhaps machinery could be used to shift the waste and put out the fires; then we could do a better job, and the city government could pay us to do the work,” he suggests. Andrade and local leaders like Wilson Castro of the centre-right Primero Justicia (Justice First) party believe the dump should be closed immediately and replaced with a sanitary landfill site much further west, on the road to Ciudad Bolívar, the capital of Bolívar state.

By law, the city government is responsible for garbage management, but the government of Bolívar state, which has an area of 238,000 square kilometres and jurisdiction over the country’s eastern borders with Brazil and Guyana, has decided to speed up the search for alternative solutions.

“Together with the Environment Ministry, we intend to implement a clean-up plan for Cambalache in five months, and create a new landfill in El Pinar,” on the westbound highway, Bolívar Governor Francisco Rangel announced.

The plan envisages spending 5.8 million dollars, and Venezuelan deputy Environment Minister Jesús Cegarra said the clean-up of Cambalache to halt soil, water and air pollution, as well as the definitive move to El Pinar, will be completed in five years. Diego Díaz, of the environmental organisation Vitalis, said there is only one sanitary landfill in Venezuela that meets sanitary and environmental regulations, called La Bonanza, which serves Caracas. Other cities deposit their waste in some 400 open-air dumps.

“Only 10 percent of the waste is recycled, and more than 80 percent of the remainder stays exposed in open air dumps in our cities. Venezuela needs another 150 landfill sites to deal with garbage, which in the last decade has come to be regarded as the number one environmental problem,” Díaz told IPS.

“The world always was and will be a filthy rubbish heap, this I know,” says the well-known tango “Cambalache”, composed by Enrique Santos Discépolo of Argentina in 1934. He used the word “cambalache” in its Argentine sense, of a vast flea market or bazaar.

But Discépolo’s line could have been a premonition describing the sprawling, stinking, smoking and outworn refuse dump in Ciudad Guayana, where people are demanding a “cambalache” – an exchange or swap – for a cleaner, less polluted space.