CUBA: The Elusive Horn of Plenty 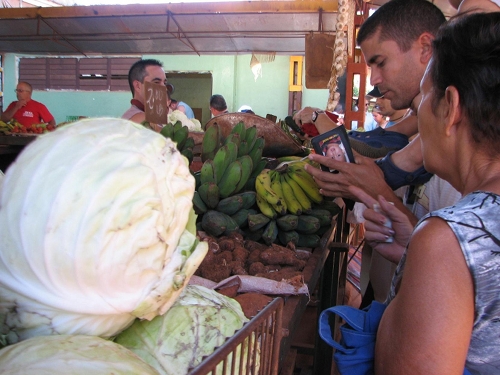 In Cuba's farmers markets, produce is sold according to the laws of supply and demand. Credit: Patricia Grogg/IPS

HAVANA, Nov 2 2011 (IPS) - Cubans are still waiting for changes and measures implemented in agriculture to translate into cheaper food. Meanwhile, the government is adjusting its budget, because more than the 1.6 billion dollars initially allocated for food spending will likely be needed.

In an interview with IPS, Blanca Rosa Pampín, an expert on agricultural issues and a business advisor to the National Association of Cuban Economists (ANEC), pointed out that the country could not escape the impact of higher prices on the international market, both for food and for supplies to produce it.

According to her figures, a ton of basic food, such as rice, soy or beans, went up by 47 percent from 2010 to 2011. During that same period, seed prices rose by 67 percent, fertilisers by 90 percent, and pesticides by 50 percent. “That means producing food now costs much more than it did a few years ago,” she said.

The situation is even more complicated because of “the U.S. blockade (embargo), which drives up spending on freight because we have to buy products in distant markets or because we have to use more expensive payment methods, such as bills of exchange,” Pampín said. Washington’s restrictions on doing business with Cuba impact the entire economy, she noted.

Despite these considerations, many people in Cuba feel impatient because the promised “structural and conceptual changes,” applied in good measure by President Raúl Castro to boost agricultural production, have not yet translated into better prices for consumers.

The average Cuban family spends an average of 60 to 80 percent of their income on food. “I think the farmers’ markets are well supplied. What we need now is more money for buying these products,” Mercedes López, a primary school teacher who is married with two children, told IPS.

Pampín said prices would go down when production increases enough to make markets overflow with meat and fresh produce.

In the farmers’ markets created in the 1990s, prices – in Cuban pesos – are set by supply and demand, and tend to be high.

Other essential goods such as clothing, footwear, furniture, home appliances, personal hygiene and household products, as well as food products long since absent from the ration book system, are sold in the government’s hard currency shops, to which about 60 percent of the population has access in one way or another.

In addition, each Cuban family has a ration book, a system used by the government to ensure that everyone has access to a basket of basic goods at extremely low prices, including rice, beans, sugar, coffee, oil, eggs, salt, pasta and bread. However, for years it has failed to meet minimum needs.

“Even so, for that ration book that we criticise so much and that at least guarantees part of what we need, we pay only 12 percent; the rest of the price of the products is subsidised by the state,” Pantín said. But the economist agrees with those who say the pace of change has been slow in agriculture, including the distribution of idle state land based on a 2008 law.

A report released on Oct. 29 says more than 1.2 million hectares have been distributed so far to individuals and cooperatives, under that law.

The head of the government-run National Centre for Land Control, Pedro Olivera, told the official daily newspaper Granma that 79.2 percent of the total land distributed is now being cultivated, and is “fundamentally” in the hands of 147,000 individuals, one-third of them young people between the ages of 18 and 35.

Experts say that this influx of youth, in addition to women – who now comprise more than 13,000 of the total of 147,000, according to Olivera – poses the additional challenge of providing training and greater possibilities for access to credit, among other means of support, because most of these new farmers have never been involved in agriculture before.

Pampín admitted that the process of land distribution has involved “lots of red tape” from the start, creating unnecessary delays. “There also was a lack of supplies for cultivating the land, and then stores were especially created for their sale, but at very high prices, which were recently lowered,” she added.

Rubén Torres, a farmer from the central city of Santa Clara, confirmed to IPS that supplies in the stores were insufficient and that there is little variety. He said there are shortages of irrigation equipment, fertilisers and fungicides. “The problem is that agriculture does not wait for tomorrow,” he said.

Possible modifications to the 2008 land distribution law are being studied. One possible change is lengthening the period of usufruct rights, which is 10 years, although it can be extended. The question of housing on these lands is also being considered, a factor that economists consider decisive for ensuring that the new farmers stay in the countryside.

Economists and agronomists are looking at different options for farmers to sell their products, as an alternative to the state food distribution monopoly. “Personally, I think cooperatives could be created, similar to the ones already operating in the areas of production and services,” said Pampín.

While it is considered the most important step, the distribution of idle land to people who want to work it is not the only measure taken in the last three years to revitalise agriculture with a view to replacing imports to feed the population of 11.2 million.

The government has also made sure that outstanding payments to farmers were paid off, that prices for milk were raised, and that new forms of distribution were created. At the same time, it was decided to decentralise decision-making, giving greater powers to municipal agriculture officials.

Nevertheless, the Cuban president himself, who has said that food production is a question of national security, admitted in August to parliament that “failures to meet goals persist” in agriculture and other sectors “due to planning errors and the lack of a comprehensive approach in leadership.”

The first half of this year ended with seven percent growth in agriculture and four percent growth in livestock raising, compared to the same period last year. However, production dropped in basic products like milk and beef. The production of poultry and other products in high demand also fell short.

In an article on the issue to which IPS had access, economist Armando Nova predicted that by the end of the year growth in agriculture could reach between two and five percent, while food imports, in the face of higher world prices and insufficient domestic production, would range between 1.7 and 1.75 billion dollars.